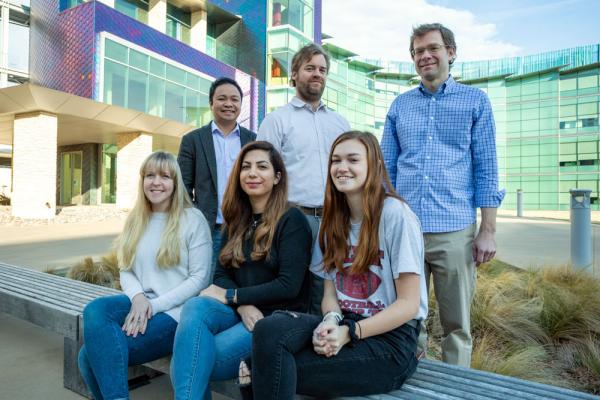 February 6, 2020 — University of Texas at Dallas researchers are breathing new life into an old MRI contrast agent by attaching it to a plant virus and wrapping it in a protective chemical cage.

The novel strategy is aimed at developing a completely organic and biodegradable compound that would eliminate the need to use heavy metals such as gadolinium in contrast agents, said Dr. Jeremiah Gassensmith, Ph.D., associate professor of chemistry and biochemistry in the School of Natural Sciences and Mathematics and corresponding author of a study published online Feb. 5 in the journal Chemical Science, a publication of the Royal Society of Chemistry.

MRI is a commonly used medical imaging technology that allows physicians to see soft tissues in the body. Some tissues, like cancer, are better seen when a patient is given a contrast agent, which makes diseased parts of the body show up brightly in an MRI scan. The only class of contrast agents approved for use with MRI in the U.S. is based on the heavy metal gadolinium, which is typically excreted through a patient's urine after an MRI is completed.

Because of its widespread use, gadolinium — which is able to sneak through wastewater treatment plants — is increasingly showing up in watersheds in and around large metropolitan areas.

"Gadolinium-based contrast agents are used so much and so often that, just from patients excreting it in their urine, the metal is being released into water resources and sediments," Gassensmith said. "The observed concentrations are still very low, but, nonetheless, it's not exactly clear what effects long-term accumulation of gadolinium might have on the body."

In addition, for patients with compromised kidneys who have difficulty excreting these contrast agents, gadolinium can increase the risk of further kidney damage.

"For these reasons, we wanted to come up with something that was biocompatible and biodegradable, something completely organic with no heavy metals," Gassensmith said. Gassensmith and his colleagues revisited a type of organic radical contrast agent, or ORCA, that had been previously considered as an MRI contrast agent but was abandoned in part because it is not bright enough, and it is broken down too quickly in the body by ascorbate — vitamin C.

"This ORCA is a metal-free agent that is compatible with current MRI techniques, is less toxic to the body and is highly biodegradable. Unfortunately, on its own, it's not very bright, and it's so biodegradable that it's impractical to use," Gassensmith said.

Gassensmith's research group repurposed the agent by first attaching the ORCA molecules to thousands of docking sites on a tobacco mosaic virus.

"Since this is a plant virus, it can't infect people or animals, and it's easily broken down by the liver. Because the virus is so large, it also allows us to put thousands of the ORCA molecules right next to each other," Gassensmith said. "It's the difference between having one Christmas tree light, which is pretty dim, and a whole string of them together, which is quite bright."

The researchers also had to protect the agent so that it would last long enough in the body to be practical for MRI use.

"We put the ORCA in a cage, which no one had done before," Gassensmith said.

Specifically, they fabricated hollow chemical structures called cucurbiturils, so named because they're shaped a bit like a pumpkin (from the plant family Cucurbitaceae), and wrapped them around each ORCA molecule.

"The cage and the contrast agent just sort of stick together -- they don't form a chemical bond with one another," Gassensmith said. "It's similar to the relationship between a key and a lock. Because there is no chemical bond, but the molecules stick together nonetheless, this approach is called 'supramolecular' chemistry, which makes the agent we created a smORCA -- supramolecular macromolecular organic radical contrast agent."

The cage is constructed like a sieve so that water can reach the ORCA. This is necessary because MRIs use the water in the body to create an image. At the same time, the cage blocks larger molecules, like ascorbate, that can inactivate the ORCA.

In mice, the unprotected ORCA broke down within about 30 minutes, while the protected version provided more than two hours of visible contrast.

"Everything we are using has been tested or part of medical research for decades. We just put them all together in a new way," Gassensmith said. "We have some more work to do to show that our material is stable in the complex environment of the human body, and we'd like to see whether we can target it to specific diseases such as cancer and other abnormalities in tissues.

"But I think our results are a promising step toward developing smORCAs into clinically viable contrast agents."