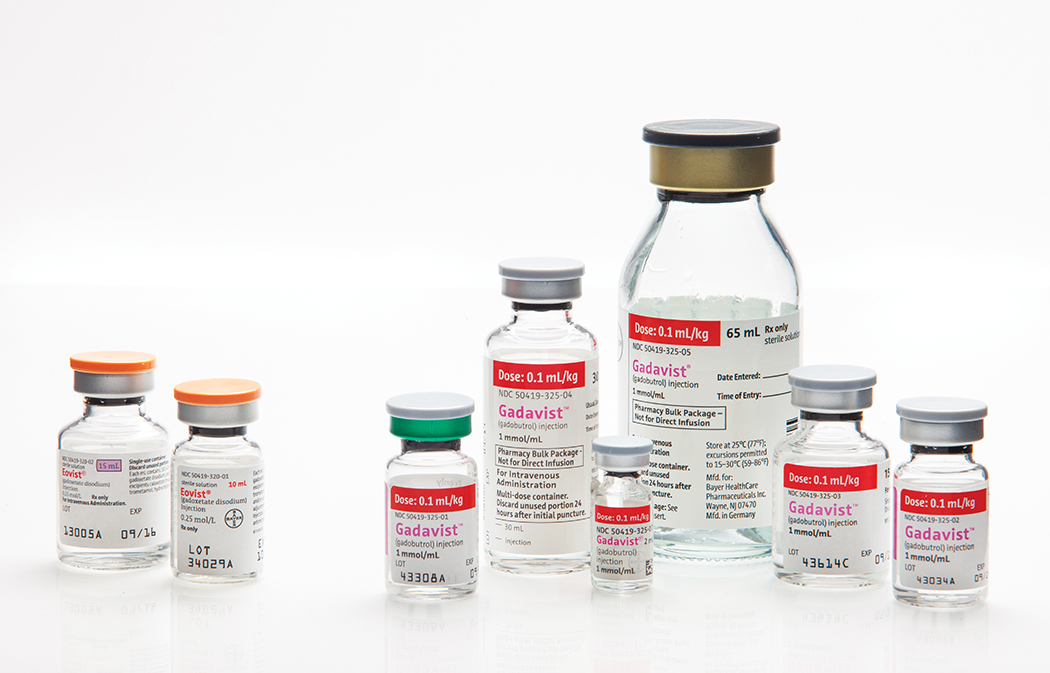 Over the past decade, several clinical studies have shown gadolinium-based magnetic resonance imaging (MRI) contrast agents accumulate in tissues inside patients. This has raised concern because prolonged, elevated levels of gadolinium in the body may cause a nephrogenic systemic fibrosis in patients with severe kidney disease. Adding to this concern were three studies in 2015, which raised new gadolinium safety concerns after it was found the agent also accumulates in the brain.

On its own, gadolinium can be toxic. Therefore, when used in contrast agents, gadolinium is bonded with a molecule called a chelating agent, which controls the distribution of gadolinium within the body. It was thought, prior to 2006, that gadolinium was completely excreted from the body. In patients found to retain traces of the agent, it was believed it was due to severe renal dysfunction. However, brain studies conducted in 2015 found gadolinium retention in the brain also occurred in patients with normal renal function.1,2 Another 2015 study from the University of Heidelberg Medical Center in Heidelberg, Germany, suggests that the molecular structure of the contrast agent may play a role in gadolinium retention.3 There are two structurally distinct categories of gadolinium-based contrast agents: linear and macrocyclic. In the macrocyclic structure, the gadolinium is bound more tightly to the chelating agent and, therefore, less likely to release free gadolinium into the body.

However, no studies have yet shown that retained gadolinium in the brain causes negative long term-health effects. This was the determination of the U.S. Food and Drug Administration (FDA) review of the safety ramifications of gadolinium-based contrast agents, released in a drug safety communication in May 2017. The FDA said it has not identified adverse health effects from gadolinium retained in the brain, and that there is no evidence to date that gadolinium retention in the brain from any of the gadolinium agents is harmful, so restricting use of these agents is not warranted at this time. The FDA said it will continue to assess the safety of these agents, and also reported that studies show linear agents retain more gadolinium in the brain than macrocyclic agents. However, the review did not identify adverse health effects related to this brain retention.

The FDA said the agents should be used as is appropriate when considering the use of any medical imaging agent. It also stated healthcare professionals should limit gadolinium contrast use to circumstances in which additional information provided by the contrast agent is necessary and to assess the necessity of repetitive MRIs.

There have been several innovations in contrast agent packaging over the past few years, including bulk, multi-dose containers and polymer containers.

In November 2014, Bracco Diagnostics released its Isovue (iopamidol injection) Imaging Bulk Package (IBP), a specific combination multi-patient, multi-dose compliant contrast medium approved by the FDA for point-of-care use in the computed tomography (CT) suite. The IBP was designed to increase safety and improve workflow, while minimizing risk and maintaining compliance regarding the use of multi-dose CT contrast media. Pharmacy bulk packages (PBPs) for multi-dose contrast media were originally approved in the 1990s with prescribing information for use in a “suitable work area, such as laminar flow hood, using an aseptic (sterile) technique,” typically found in the hospital pharmacy setting. Over time, The Joint Commission, which accredits and certifies healthcare organizations nationwide, began issuing citations to medical centers for using PBPs to transfer contrast media outside of the pharmacy in conditions that were not fully compliant with prescribing information. In 2012, the Institute for Safe Medication Practices (ISMP) called for hospital pharmacy oversight on the purchase, distribution, storage and use of intravenous contrast media, the use of single dose vials or pre-filled syringes for radiological use, and the proper use of PBPs. The Isovue IBP allows for easy and cost-effective intravenous contrast enhancement of CT imaging, providing 10-hour on-demand dosing from the same container without the risk of incurring multi-dosing citations.

The contrast media market is made up of only a small number of players, and that pool got smaller in July 2015 when Guerbet acquired Mallinckrodt’s contrast media and delivery systems (CMDS) business for $270 million. Guerbet said CMDS business was well positioned with Optiray and Optiject (Europe)/Ultraject (United States) in X-ray, whereas Guerbet holds a similar position in MRI with its Dotarem agent. The acquisition opened up technological synergies, with Mallinckrodt’s syringe-based delivery systems and Guerbet’s hydraulic injection technique for softbags. The businesses were also geographically complementary, with Mallinckrodt’s business holding a strong position in the United States and Guerbet likewise in Europe.

In July 2017, Guerbet announced it will phase out sales throughout the world of two products: Hexabrix (meglumine and sodium ioxaglate) and Optimark (gadoversetamide). The company said the products are redundant after the acquisition of Mallinckrodt’s contrast media and delivery systems business. In 2015, Guerbet announced the withdrawal in the United States of Hexabrix, an iodinated contrast medium for X-ray imaging that has the same indications as two other Guerbet products, Optiray (ioversol) and Xenetix (iobitridol). Hexabrix sales in Europe, Asia and Latin America will progressively cease, by the end of 2019 at the latest. Optiray and Xenetix cover more than 70 countries.

Guerbet’s decision to phase out Optimark is similar: Optimark and Dotarem (gadoteric acid) are both gadolinium-based contrast agents and have similar indications for MRI. Optimark is a linear agent and faces decreasing worldwide demand, while Dotarem, a macrocyclic and ionic agent, has seen worldwide demand increase, according to the company. Dotarem is registered in more than 70 countries. Sales of Optimark will end July 26, 2017, in European Union countries. Then, and in order to ensure a smooth transition and continuous supply for patients, Optimark phase-out will be progressively implemented in other geographic areas until the end of 2019.

This move to streamline its gadolinium-based contrast agent portfolio through a focus on Dotarem is consistent with recent recommendations of the Pharmacovigilance Risk Assessment Committee (PRAC) of the European Medicines Agency.  itn