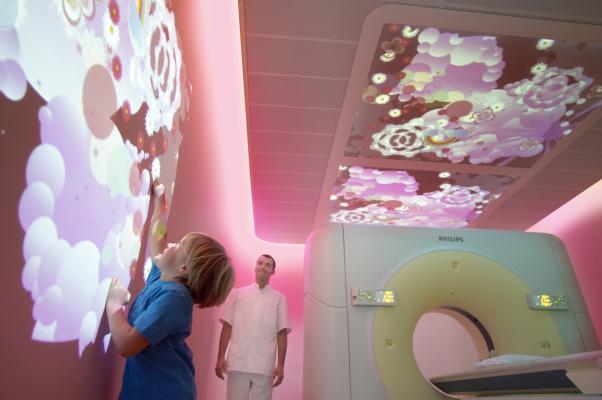 Delaney McGuirt, B.S., R.T.(R)(MR), a radiologic technologist from the University of North Carolina Biomedical Research Imaging Center, used online databases to review dozens of studies published within the past 10 years to identify the most effective alternatives to sedation or general anesthesia for pediatric patients undergoing an MRI examination.

MR procedures require patients to remain still in a confined space for long periods. This can be extremely difficult for pediatric patients. According to McGuirt, preprocedural sedation or general anesthesia is commonly used to relax patients eight years old and younger. However, pediatric sedation is associated with a higher risk of respiratory depression resulting from oversedation, potentially causing a loss of protective reflexes and airway maintenance. As a result, alternative methods of preparing infants and children for MR examinations should be explored to reduce patient risk, as well as time and cost to facilities.

“Any measure that can be taken to increase the safety of patients is worth exploring, especially when dealing with the particularly sensitive population that is pediatrics,” said McGuirt.

The literature review reports that mock scanners — full-scale replicas of MR imaging units devoid of internal magnets — have a high success rate with guiding children through successful MR procedures and providing cost savings. For example, a program at the Royal Children’s Hospital in Australia that uses a mock scanner to prepare patients noted an 8.6 percent reduction in general anesthesia rates. Also, of 102 children who used the mock scanner, 98 percent went on to have a successful MRI procedure. Moreover, the hospital compared a full-scale mock MR examination, including staff and maintenance, with that of general anesthesia and found an estimated annual net savings of $117,870.

MR-compatible audiovisual systems, which allow patients to watch and listen to a movie during their scan, have a solid success rate as well, according to the literature review. McGuirt referenced a number of studies that showed high success rates using MR-compatible audiovisual systems, including one that reported an overall 9 percent reduction in sedation rates and a 13 percent decrease in sedation rates among children 3 to 10 years old.

Feed-sleep manipulation, a process where a child’s normal feeding and sleeping patterns are modified, is also effective, but primarily with children younger than four years of age. In addition, McGuirt cited several studies that showed high success rates (up to 96 percent), when scans were completed during children’s natural sleep cycle.

“Instead of relying on sedation, facilities should invest time in developing alternative methods for pre-procedural MRI preparation. Research has shown this has the potential to decrease possible hazards to the pediatric patient, as well as cut costs,” said McGuirt.

McGuirt stressed that current resources fail to provide a comprehensive review of all existing alternative sedation methods, and further investigation is needed to identify a best practice.