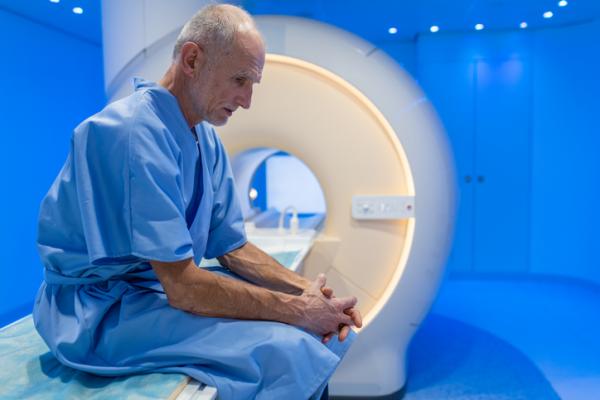 July 20, 2022 — Blue Earth Diagnostics, a Bracco company and recognized leader in the development and commercialization of innovative PET radiopharmaceuticals, today shared news of the publication of two independent, retrospective studies evaluating the use of Axumin (fluciclovine F 18) PET imaging in men with biochemical recurrence of prostate cancer who were undergoing androgen deprivation therapy (ADT). The first study of 320 men, 68 of whom were on ADT, was published in Urologic Oncology. It showed that there was no difference in the performance of Axumin PET imaging between the patients receiving ADT and the 252 patients not receiving ADT. Both populations had a whole body Axumin positivity rate of 82%, consistent with the patient population and positivity rates of data presented to the U.S. Food and Drug Administration (FDA) for approval of Axumin. The second study, published in Tomography, assessed 71 patients with biochemical recurrence of prostate cancer on ADT for three or more months. It found that there was no difference in Axumin performance and that the length of time on ADT did not influence Axumin detection rates. Axumin, a novel amino acid-based radiopharmaceutical, is FDA-approved for PET imaging in men with suspected prostate cancer recurrence based on elevated blood prostate specific antigen (PSA) levels following prior treatment.

“Physicians face challenges in localizing recurrent disease in patients with prostate cancer who experience biochemical failure while on ADT,” said Bital Savir-Baruch, MD, Chief of Nuclear Medicine, University of Arizona College of Medicine, Tucson, Ariz. and affiliated with Loyola University, Chicago, Ill. “ADT is known to affect the expression of prostate-specific membrane antigen (PSMA) receptors, and can inhibit the uptake of choline-based agents in patients with androgen-sensitive prostate cancer. The effect of ADT on 18F-fluciclovine imaging has not been well documented in clinical practice. The large retrospective study at Loyola explored its influence on the performance of 18F-fluciclovine in patients with recurrent prostate cancer. These results from the study at Loyola showed that patients with biochemical recurrence of prostate cancer undergoing treatment with ADT have similar 18F-fluciclovine positivity rates as those not on ADT, and the positivity rate increases with increasing PSA levels in both groups.”

“We are pleased to note the publication of these clinically relevant studies that illustrate the ongoing interest of the physician community in the role that Axumin molecular imaging can have in guiding informed patient care for men with biochemical recurrence of prostate cancer,” said David E. Gauden, D.Phil., Chief Executive Officer of Blue Earth Diagnostics. “Blue Earth is the recognized leader in diagnostic PET prostate cancer imaging, and we continue to advance scientific knowledge about the proven clinical utility of Axumin (see Axumin full Indication and Important Information). Our prospective FALCON and LOCATE studies demonstrated that Axumin PET/CT located recurrent disease in the majority of men in the study, which frequently resulted in significant changes to their management plans for biochemical disease recurrence. Notably, Emory University’s independent EMPIRE-1 study (NCT01666808), published in The Lancet, demonstrated that treatment informed by Axumin PET imaging significantly improved event-free-survival for men with recurrent prostate cancer at three and four years. Those results included 30 (38%) patients with recurrent prostate cancer who were on ADT in the Axumin arm.”

Dr. Gauden continued, “Axumin PET imaging has informed healthcare decisions for more than 165,000 men with recurrent prostate cancer across the United States, where it is available at more than 1,350 imaging centers and widely reimbursed. Blue Earth Diagnostics is committed to helping patients through innovative diagnostic solutions that empower the evolution of care for men with recurrent prostate cancer, and we look forward to helping even more patients in the future.”

Highlights of the publications

“Effect of Hormonal Therapy on 18F-Fluciclovine PET/CT in the Detection of Prostate Cancer Recurrence, Localization of Metastatic Disease and Correlation with Prostate-specific Antigen”

The study was designed to explore the impact of androgen deprivation therapy (ADT) on the performance of 18F-fluciclovine. A retrospective analysis was conducted to compare the 18F-fluciclovine PET/CT positivity rate in 320 patients with biochemical recurrence of prostate cancer receiving ADT at the time of the scan with the rate achieved in those not receiving ADT. For each group, the number of positive 18F-fluciclovine PET/CT scans (positivity rate) was evaluated for the whole body, prostate/bed, and extraprostatic regions, and rates were correlated with PSA. The 18F-fluciclovine positivity rate was analyzed at the patient level, in the prostate/bed region and at each extraprostatic site (pelvic lymph nodes, extrapelvic lymph nodes, bone and soft tissue or other metastatic sites). Positivity rates were stratified according to whether or not the patient was receiving ADT at the time of scan.

At the time of the 18F-fluciclovine scan, 68/320 (21%) patients were on ADT, while 252/320 (79%) were not. The median Gleason score was 8 (range of 6–10) in the ADT group vs. 7 (range of 6–10) in the non-ADT group. Overall, positivity rates demonstrated no statistical significance between the ADT and non-ADT groups. Positivity rates (ADT vs. non-ADT) were 82% (56/68) vs. 82% (206/252) for the whole body, 57% (39/68) vs. 60% (152/252) for prostate/bed, and 60% (41/68) vs. 53% (133/252) for extraprostatic regions. No significant difference was observed between ADT and non-ADT groups at different PSA levels. The authors cited certain limitations to the study, among them its retrospective nature and lack of histopathological data, and unknown duration of ADT therapy. As stated in the abstract, the authors concluded that “detection of prostate cancer recurrence with 18F-fluciclovine PET/CT is not significantly influenced by ADT, suggesting that localization of disease in patients with detectable PSA who are receiving ADT is feasible with 18F-fluciclovine.”1

The manuscript, “Effect of Hormonal Therapy on 18F-Fluciclovine PET/CT in the Detection of Prostate Cancer Recurrence, Localization of Metastatic Disease and Correlation with Prostate-specific Antigen” was published online on June 21, 2022, in Urologic Oncology. It will also appear in an upcoming print issue. Authors on the manuscript were: Jad El Bulbul, Abdulrahman Hashem, Damian Grybowski, Cara Joyce, Essam Rashad, Medhat S. Gabriel, Robert H. Wagner, and Bital Savir-Baruch. All authors are affiliated with Loyola University Medical Center or its Health Sciences Campus, Maywood, Ill. Dr. Savir-Baruch is now affiliated with the University of Arizona College of Medicine, Tucson, Ariz. as well as Loyola University.

The study was designed to investigate the impact of concurrent ADT on disease detection with 18F-fluciclovine PET in patients with metastatic prostate cancer following primary therapy. Data from 71 patients who had been receiving ADT for at least 3 months at the time of undergoing an 18F-fluciclovine PET/CT scan were retrospectively reviewed. The reasons for the PET/CT scan were rising PSA (n=58), staging of advanced disease (n=4) or therapeutic monitoring (n=9).

Malignant lesions with increased uptake of 18F-fluciclovine were detected in 60/73 (82%) of the scans; 33 (45%) had lesions in the prostate/bed and 46 (63%) in extraprostatic sites. Patients received ADT for a median of 2 years pre-scan. The time on ADT did not influence detection. The detection rates were 89% for patients who had received ADT for < 1 year, 63% for a period of 1 - <2 years, 83% for 2 - 4 years, 78% for > 4 - 10 years and 67% for a treatment period of >10 years. The authors cited certain limitations to the study, including its retrospective nature and lack of histopathological data, and the inability to compare 18F-fluciclovine scans while patients were on ADT and after withdrawal. As stated in the abstract, the authors concluded that “18F-fluciclovine detected recurrent or metastatic lesions in 82% of patients with prostate cancer receiving ADT. The rates achieved are consistent with widely reported data for 18F-fluciclovine PET/CT, suggesting that withdrawal of ADT before scanning is not necessary.”2

Image interpretation errors can occur with Axumin PET imaging. A negative image does not rule out recurrent prostate cancer and a positive image does not confirm its presence. The performance of Axumin seems to be affected by PSA levels. Axumin uptake may occur with other cancers and benign prostatic hypertrophy in primary prostate cancer. Clinical correlation, which may include histopathological evaluation, is recommended.

Hypersensitivity reactions, including anaphylaxis, may occur in patients who receive Axumin. Emergency resuscitation equipment and personnel should be immediately available.

Axumin use contributes to a patient’s overall long-term cumulative radiation exposure, which is associated with an increased risk of cancer. Safe handling practices should be used to minimize radiation exposure to the patient and health care providers.