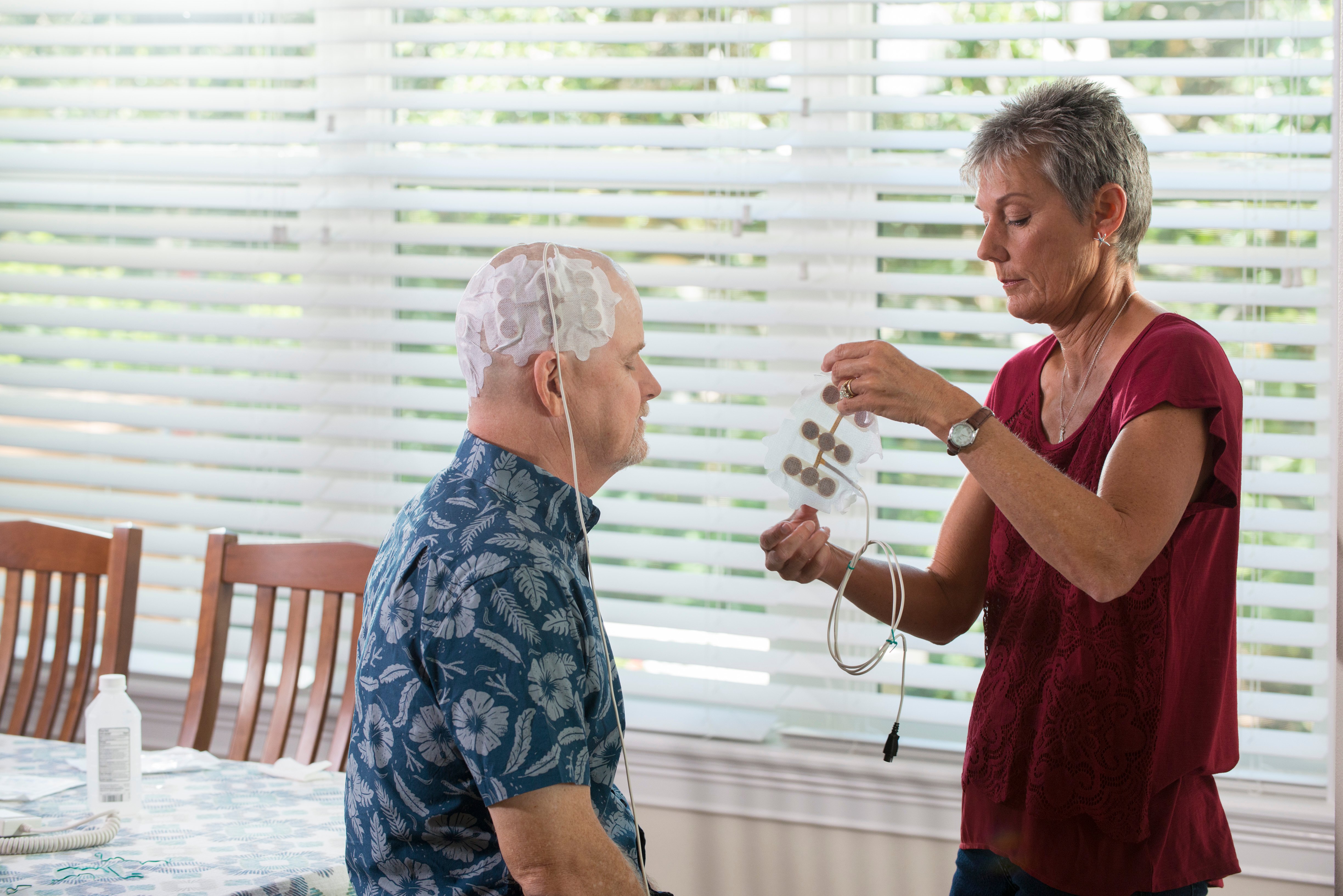 The patient’s wife changes the Optune array. Clinical trials indicate that the electrical fields emitted by Optune have the potential to lengthen the lives of patients with glioblastoma.

Approximately 11,000 professionals attended the four-day meeting of the American Society for Radiation Oncology (ASTRO). Oncologists, medical physicists, radiation therapists, biologists and members of industry representatives from around the world attended lectures and exhibits focused on translating discovery into cures. The 2018 Presidential Symposium addressed four subthemes — the interface of radiation oncology with immunology; how artificial intelligence and radiation oncology can come together to improve outcomes; the role played by viruses (considering that one in six human cancers is caused by a virus); and biopsies that serve as serum tests for circulating tumor cells.

In sync with value-based medicine, ASTRO exhibitors emphasized “patient-first” technologies. On the exhibit floor, Accuray sought to exemplify personalized and adaptive radiation therapy in its products, demonstrating how its platforms adapt to patient movement and changes. Other vendors showed products and works-in-progress technologies, many with similar traits, aimed at patient centricity and boosting effectiveness, the hallmarks of value-based medicine.

Scheduled keynote speeches called for Norman E. “Ned” Sharpless, M.D., director of the National Cancer Institute, to share his vision for how the institute could advance cancer research and cures; and futurologist Mark Stevenson to address how social, economic and healthcare problems might be solved. Social issues impacted oncology, namely the achievement of gender equity. This was addressed during a session that provided data about trends in gender representation; barriers to diversification in training; interventions to mitigate bias, harassment and other deterrents to professional productivity; and leadership lessons and imperatives.

An international session examined emerging developments in head and neck cancer therapy. Included were discussions of how to accomplish follow-up irradiation of patients and multimodal imaging in treatment planning.

Among key scheduled scientific topics were:

•    The role of radiation hypofractionation in the treatment of breast cancer following early detection (featuring Murray Brunt, M.D., of London’s Institute of Cancer Research) with conclusions based on a review of 10 years’ clinical data;

•    Long-term outcomes of stereotactic body radiation therapy of the genitourinary cancer prostate adenocarcinoma in patients at low and intermediate risk (with Amar U. Kishan, M.D., from the University of California, Los Angeles). Data obtained during a multi-institutional consortium study were presented; and

•    A randomized clinical trial showed the potential of stereotactic ablative radiotherapy against advances in oligometastatic cancers (with David Palma, M.D., of the London Health Sciences Centre).

Brian D. Kavanaugh, M.D., chairman of ASTRO’s board of directors, noted that “significant cancer treatment breakthroughs are happening right before our eyes,” an observation that played out on the exhibit floor. Kavanaugh pointed especially to the expansion in radiation oncology’s understanding of patient centric, high-quality care.

The company showcased its new Bravos afterloader system, which cleared FDA review Oct. 3, only a few weeks before ASTRO began. The company presented the remote controlled applicator as exemplifying efficiency and ease of use. The afterloader is one in a portfolio of products that include the company’s BrachyVision, VariSeed and Vitesse treatment planning systems; VariPath biopsy module, and Acuros BV dose calculator.

Prior to and during the meeting, Varian was promoting its Halcyon treatment platform, released in spring 2018, as the means to streamline workflow, expedite installation and reduce costs. The system is substantially different from conventional linear accelerators, whose rotating gantry can be noisy. In contrast, all of Halcyon’s moving parts are behind the bore, according to the company.

The system integrates imaging and treatment, utilizing image guidance and intensity modulation to enhance the protection of healthy tissues. Early adopters reported treating about 40 patients on the Halcyon system over a 10-hour span. That number could rise to as many as 60, Varian said.

The Power of MRI

ViewRay showcased its MRI-guided radiation therapy system, MRIdian. Thanks to a “patented split-magnet MR design,” MRIdian provides an unobstructed path for the radiation to the cancer. It seamlessly integrates MRI into the oncology workflow, according to the company, affording on-table targeting that responds to movement that may occur from respiration, for example. MRIdian also adapts to tissue changes induced in the patient by the radiation therapy.

The device cleared the FDA in early 2017. Its underlying concept arose in 2004 when company founder, James F. Dempsey, was a member of the radiation oncology faculty at the University of Florida. At ASTRO, ViewRay highlighted what it described as the four key elements that differentiate its MRIdian LINAC from other radiotherapy systems:

•    The use of MR to visualize tumors and surrounding organs in high-definition and high-contrast imaging;

•    On-table treatment adaptation to accommodate changes in anatomy that regularly may occur from one treatment to the next;

•    Real-time soft tissue image guidance and beam control during the delivery of radiation; and

•    The ability of the therapy system to fit into vaults designed for standard linear accelerator vaults.

Elekta played a similar card at ASTRO, showcasing its combined MRI and linear accelerator, which the company submitted for FDA review in August 2018. Known as Unity MR Linac, the device includes a derivative of a 1.5T scanner from Philips Healthcare and a linac to administer therapy. Integrating the two allows advanced treatment planning with a single platform, according to the company.

With Unity, clinicians can see and track difficult-to-visualize soft tissue anatomies while radiation dose is delivered. The combined technologies exemplify patient centricity as it affords “optimal care based on individual tumor characteristics,” according to Elekta. Developed in collaboration with Philips, the device is in clinical use at The Netherlands Cancer Institute-Antoni van Leeuwenhoek Hospital. Unity epitomizes personalized precision cancer therapy, according to the company. It received the CE mark in June 2018.

By contrast, the company drew attention to its sixth-generation Leksell Gamma Knife Icon, which cleared the FDA at the end of March 2018. The stereotactic radiosurgery system (SRS) had been cleared only weeks earlier for sale in China by that country’s version of the FDA.

The Gamma Knife has been a standard bearer of SRS since the 1960s, when it was developed as an alternative to traditional brain surgery and whole brain radiation therapy for diseases such as metastatic cancer. At ASTRO 2018, the company framed the latest version of the system as delivering up to thousands of low-intensity radiation beams to one more targets in the brain.

Among Elekta’s latest commercial releases are Aqua, a software platform designed to coordinate and centralize quality assurance tests typically performed in a radiotherapy clinic. The company framed the software as the means to reduce the time needed to do these tests by managing and automating complex tasks.

Novocure updated booth visitors about plans to expand the use of its Optune technology, which uses electricity to manage patients with glioblastoma. Data from more than a dozen scientific studies regarding “Tumor Treating Fields” (TTFs) were presented at ASTRO, according to the company. Highlights included an analysis of the Radiation Therapy Oncology Group (RTOG) Recursive Partitioning Analysis (RPA) scores in Novocure’s phase 3 pivotal trial in newly diagnosed glioblastoma (GBM), and the first presentation of an analysis of the correlation of dose density and survival outcomes.

Last year, the Journal of the American Medical Association published an analysis of a phase 3 pivotal trial of Optune in combination with temozolomide for the treatment of newly diagnosed glioblastoma. The analysis demonstrated that overall survival and progression free survival were each extended by 37 percent for patients who received Optune and the chemotherapy drug compared to patients who received temozolomide alone. The trial included 695 newly diagnosed GBM patients enrolled at 83 centers from July 2009 to December 2016. The clinical trials showed that the use of this technology may lengthen the lives of patients with glioblastoma, while reducing side effects from radiation and chemotherapy. Data presented at ASTRO 2018 indicate that a higher dose of TTF to the tumor bed may be associated with improved overall survival.

Novocure’s TTF-generating technology is currently indicated for the treatment of adults with newly diagnosed, supratentorial glioblastoma after surgical debulking and the completion of radiation therapy together with concomitant standard of care chemotherapy. The company may be grooming Optune for use with patients beset by pancreatic or ovarian cancers, but the focus at ASTRO 2018 remained on GBM.

Proton Therapy and Beyond

Vision RT presented its AlignRT for tracking a patient’s position before and during radiation therapy, as well as aiding in setup and treatment accuracy. The system uses a 3-D stereo camera to track skin surface, comparing the actual position to the ideal one. Through an interface with the therapy system, AlignRT can signal a pause in the delivery of radiation if the patient moves out of the desired position. This has the potential to minimize collateral damage to healthy tissue without the use of positioning tattoos.

The current integration improves connectivity, according to Philips. And the use of automated planning tools simplifies workflow, reducing the total time needed to create plans for IMRT and volumetric modulated arc therapy (VMAT). The objective is to distribute highly conformal radiation doses with improved target coverage and minimal collateral damage to healthy tissues.