WEB EXCLUSIVE: SBRT As Safe And Effective As Conventional RT For Some Prostate Cancer Patients

This is the third web exclusive article in a four-part series from Consulting Editor Greg Freiherr, reporting live from the show floor at ASTRO 2018 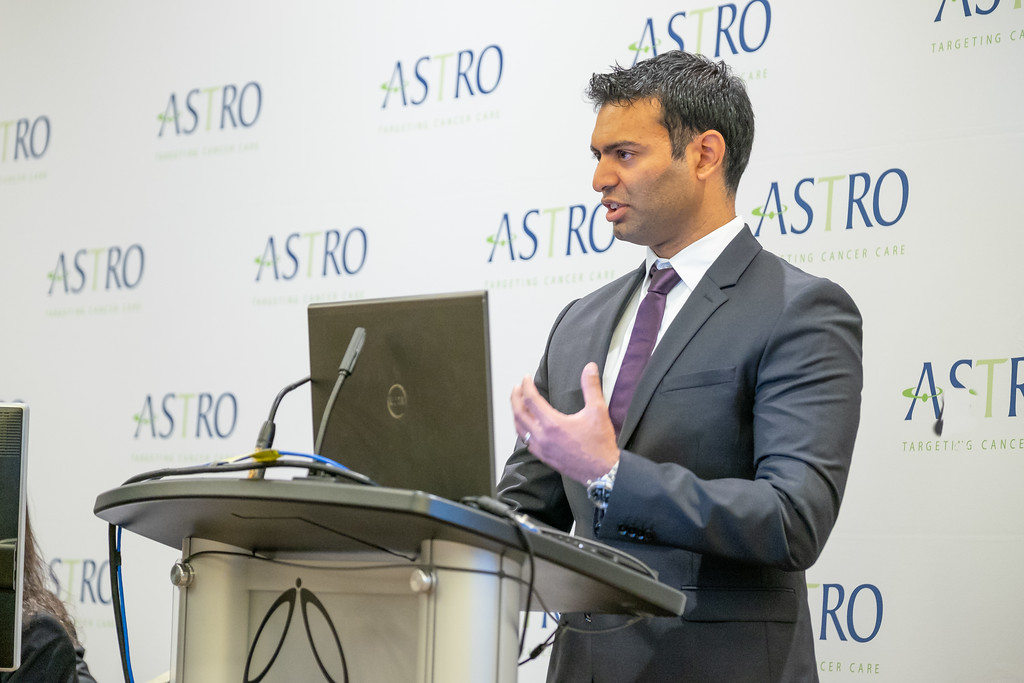 With its shorter course of treatment, stereotactic body radiation therapy (SBRT) has long been preferred for patients with prostate cancer, particularly given that this form of cancer has appeared to be more sensitive to higher doses per treatments. Concern has lingered, however, about its safety. Those concerns have been put to rest for low and intermediate-risk prostate cancer, according to a researcher from the University of California, Los Angeles.

“We can’t say that this (SBRT) is the standard of care — but it is a standard of care option for low- and intermediate-risk cancer,” said UCLA assistant professor of radiation oncology Amar U. Kishan, M.D.

On Oct. 22, Kishan reported long-term findings about the safety and efficacy of SBRT at the annual meeting of the American Society for Radiation Oncology (ASTRO) in San Antonio, Texas.

Expert oncologist Neha Vapiwala, M.D., characterized the research as a paradigm shift toward hypofractionation in prostate cancer. SBRT “really is the standard for low- and-intermediate risk prostate cancer treated with external beam therapy,” said Vapiwala, an associate professor of radiation oncology at the Hospital of the University of Pennsylvania.

By condensing the course of therapy to four or five treatments, SBRT — also known as extreme hypofractionation or stereotactic ablative therapy — has pushed the hypothesis that short-term, high-dose treatments can be effective and safe against some forms of prostate cancer, according to Kishan. The long-term results interpreted by Kishan and colleagues support this hypothesis.

The analyzed data were drawn from a dozen prospective studies — 10 single-institutional trials and two multinationals. Together these studies included 2,142 patients who were followed an average 6.9 years. Two-thirds were treated using the Cyberknife, according to Kishan; the remainder received therapy from a range of different devices, including gantry-mounted linear accelerators.

The ability of SBRT to target cancers and minimize radiation to healthy tissues has been intuitively appealing. While data obtained during single- and even some multiple-institution studies have been supportive, they have not been enough to sway key opinion leaders in the oncology community. Guidelines, including ones issued by ASTRO and the National Comprehensive Cancer Network, have called for long-term follow-up. The Kishan study addresses that call.

Kishan and colleagues found that severe toxicities, ones requiring intervention or that severely impact quality of life, occurred as — or less — frequently with SBRT than conventional forms of radiation therapy, including forms of brachytherapy and fractionation with linear accelerators. Yet SBRT was comparably effective.

“We can conclude that the long-term safety and efficacy profile of SBRT compares favorably with other radiotherapy modalities, in treatment of low- and intermediate-risk disease,” Kishan said.

Therapists might prefer a finding that pointed them clearly in one direction or the other. Such was not within the scope of the UCLA-led study, however. Doing so would have required a longer-term comparison of SBRT and conventional therapies, Kishan said. Extended follow-up of many patients is currently underway, he said. In the meantime, the Kishan study is significant for quelling a continuing concern about the safety of SBRT.

Conventional fractionation can take much longer — eight or nine weeks — compared to SBRT, which can be completed in a week or so. Because prostate cancer cells appear to be highly sensitive to large daily doses of radiation, therapy might be condensed to four or five high-dose treatments spread over one to two weeks, according to Kishan.  The savings in time would be substantial, he said, just as therapy could be more convenient for patients.

SBRT could also save money, he said, for both patients and the health care system.  The condensed treatment regimen possible with SBRT could reduce the number of work days that patients miss. Additionally, SBRT may provide a psychological benefit “in that men can get on with their lives and put their treatment behind them,” he said.

Recurrence, survival and toxicity associated with SBRT were identical to — or better than — those achieved through conventional therapies, Kishan said. The study demonstrates, he said, that some prostate cancer patients can undergo SBRT “with the same, positive outcomes they would receive from a longer course of treatment,” he said. “We have shown that this method is both safe and effective and should be a standard treatment option for patients with low- and intermediate-risk prostate cancer,” he said.

Radiation oncologists should be careful, however. Some clinical trials of SBRT have used doses that were too high, Kishan said. Others have not used appropriate image guidance.