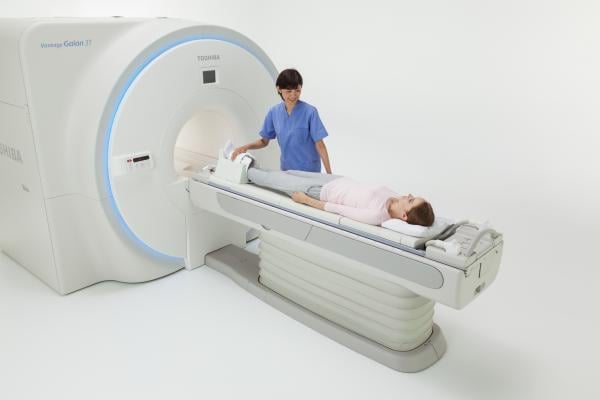 “Young athletes competing in high-impact activities face many potential risks of head injury, but Toshiba Medical’s Galan 3T MR system may enable us to identify these risks and make greater strides in our understanding and treatment of early head trauma,” said Mark Fisher, M.D., UCI professor of neurology and study lead researcher. “We are very excited at the prospect of marrying healthcare and technology to provide better treatment for athletes today and improved preventative care in the years to come.”

The UCI study is investigating the use of non-contrast MRI as a safe and noninvasive way to examine young athletes and other patients for early signs of CTE, a degenerative disease found in those who suffer head trauma, and a well-documented consequence of sub-concussive head injury. Evaluations of local high school student volunteers include 100 test subjects (football players) and 50 control subjects (non-football players), and the research is supported by the UCI Exercise Medicine and Sport Sciences Initiative (EMSSI). Toshiba Medical has provided application training to UCI researchers to operate the Vantage Galan 3T. UCI is also leveraging the system for imaging of the cervical spine to screen for early neck injury.

The Vantage Galan 3T was chosen for its ability to conduct quick, comfortable and high-quality neuro exams. Designed to increase signal-to-noise ratio (SNR) by up to 20 percent, the system allows for faster sampling and higher resolution images thanks to PURERF and Saturn technologies. This, combined with the ability to stack protocol sequences, results in quick neuro exams enabling researchers to produce higher resolution images for myriad neuro exams in under five minutes. The system’s 71 cm aperture expands access to large and claustrophobic patients, while Pianissimo Zen technology reduces sound during acquisition by 99 percent.