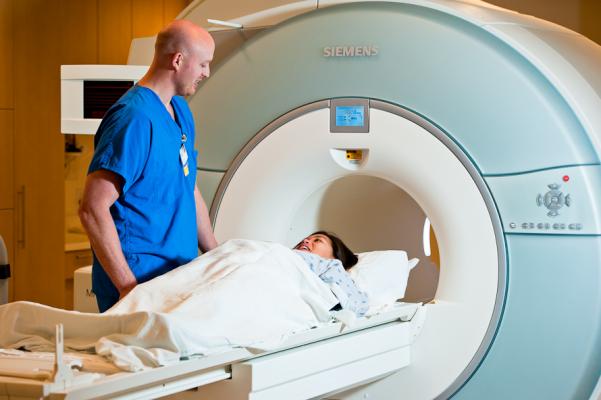 October 3, 2013 — Fabry disease can be detected using a new magnetic resonance imaging (MRI) technique that was developed at the University of Alberta. The discovery of this new diagnostic tool has resulted in updated clinical guidelines for the diagnosis and treatment of Fabry disease in Canada.

Faculty of Medicine and Dentistry researchers Gavin Oudit, M.D. and Richard Thompson, Ph.D., worked with faculty colleagues Kelvin Chow and Alicia Chan on the discovery, as well as Aneal Khan from the University of Calgary. The findings were recently published in the peer-reviewed journal Circulation: Cardiovascular Imaging and involved 31 Alberta patients who have the disease.

Thompson and trainee Chow developed the MRI technique known as T1 mapping which can detect heart damage and changes in earlier stages than regular MRI scans or ultrasound. When this type of MRI is used on patients with Fabry disease, the scans can detect both the disease and the severity of damage to the heart. The T1 mapping method can be easily programmed onto MRIs around the world.

"This test can uniquely identify Fabry disease by detecting microscopic changes in the heart muscle structure that are not visible on regular images," says Thompson, who works in the Department of Biomedical Engineering. "Fabry disease can look like other diseases if you only look at the whole heart structure or function, but this T1 mapping test, that can detect the tiniest changes in the heart, could identify all the patients with Fabry disease."

"It is very likely that this technique will become a key part in clinical examination of patients with Fabry disease. This finding will advance the clinical care of these patients around the world. The implications will be widespread,” said Oudit. "Heart disease is the number one cause of death for patients with Fabry disease. The earlier the disease can be pinpointed, the sooner treatment can start. The treatment for the disease halts the condition and prevents serious damage to the heart."

Fabry disease affects 1 in 1,500 to 3,000 people but was originally thought to be a rare disease. Some countries now screen newborns for the condition that costs $200,000 a year to treat through monthly infusions called enzyme replacement therapy.

It is estimated that about 1,000 Albertans are living with the disease but not everyone who has the condition has been diagnosed. Sometimes people will see scores of kidney and heart specialists for years before anyone diagnoses the condition. Men can have a blood test to identify the condition while women, who may also carry the disease without showing symptoms, need to undergo genetic testing. The T1 mapping test can both pinpoint the disease and assess damage to the heart.”