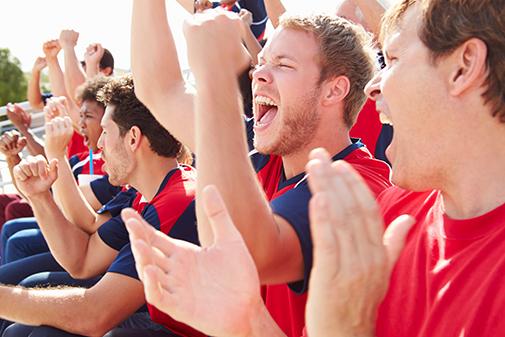 Image courtesy of University of York

October 25, 2018 — Scientists have scanned the brains of die-hard soccer fans to find out why supporters of rival teams often have very different views on the same match.

When England played Colombia in the 2018 World Cup, many England fans complained about a high number of fouls from the Colombian side.

Simultaneously, in South America, a petition demanding a rematch because of the referee's unfair bias against the Colombian team rapidly gained hundreds of thousands of signatures.

The two vastly different perceptions of the same match left many people wondering; did Colombia and England supporters see the same game?

Now, researchers from the University of York have used magnetic resonance imaging (MRI) scanning to try and find out how people can have such different takes on soccer.

As part of the research they mapped and compared the brain activity of Manchester United and Chelsea supporters while they watched their beloved sides in action against one another.

The findings suggest that fans of rival teams do see the same match in a visual sense. That is, the regions of the brain that are directly involved in seeing showed similar activity in both sets of supporters.

However, the results of the study showed clear differences between the groups in the activity of higher regions of the brain involved in cognition, indicating that the same sensory information was interpreted and evaluated differently.

Prof. Tim Andrews from the Department of Psychology at the University of York, said: "When we compared the brain activity of supporters of the same team and supporters of opposing teams, we found that activity in the sensory regions of the brain were aligned in all participants - or in other words, they all saw and heard the same game.

"But, in the frontal and subcortical regions of the brain — including areas known to be active in reward, self-identity and control of movement — there was a correlation between supporters of the same team, but significant differences between the groups. This is what allows fans of rival teams to develop a different understanding of the same game."

For the study, the researchers recruited keen supporters of Chelsea and Manchester United. The participants had supported their team for an average of 15 years and had been to see them play over 25 times.

In an MRI scanner, participants were shown a Match-of-the-Day-style montage of highlights from games between the two teams.

One of the regions of the brain that showed the greatest differences between groups was the nucleus accumbens — an area central to the brain's reward system. The research team suggest this link between group bias and reward may explain the ease and rapidity with which humans form groups and favour in-group members.

The research showed that multiple parts of the brain are involved in producing this group bias effect and that it reflects an interaction between a network of regions rather than a single mechanism.

Andrews added, "The results of our study offer new insight into the neural basis for group bias and the human tendency to feel comfort and reassurance when part of a group, alongside distrust of outsiders and rivals."

"The regions of the brain that showed the biggest differences between the groups of supporters — the subcortical regions positioned in the middle of the brain — are believed to have been conserved during evolution — this supports the idea that group mentality may reflect one of the more primitive human instincts."

The study is published in the journal Cerebral Cortex.1