May 11, 2012 — A team of scientists led by Stanley Fricke, M.D., of the Children's National Medical Center in Washington, D.C., broke the "magnetic resonance imaging (MRI) sound barrier," a finding that could lead to a hundred-fold increase in MRI speed, according to a new clinical study published this week in the peer-reviewed journal Medical Physics.

"Our ultimate goal," said Fricke, "is to image small children in seconds rather than minutes. In this way children will not need to be anesthetized prior to imaging."

Past attempts to substantially accelerate MR imaging failed because gradient pulse sequences (the technology responsible for image formation in an MR machine) can cause twitching or more serious nerve stimulation. To prevent such unwanted and potentially dangerous side effects, the U.S. Food and Drug Administration (FDA) and European regulators put in place limits on gradient strength and speed, based on older clinical studies that used relatively slow gradients. The new Medical Physics study used pulse sequences with rise 100 times faster than conventional MRI to prove that nerve stimulation could be eliminated by employing ultra-fast magnetic gradients.

According to Fricke: "The old speed limits may need to be reviewed in light of this new data. The new technology could lead to the adoption of MRI as a first-line method of assessing coronary artery disease, improve high-resolution brain mapping and implement low-cost dental MRI as a potential non-ionizing-radiation alternative to X-rays." Benjamin Shapiro, M.D., a team member from University of Maryland's Fischell Department of Bioengineering, has proposed using the high gradients with magnetic nanoparticles to improve image-guided minimally invasive therapy.

The landmark study, funded by the National Institute of Neurological Disorders and Stroke and the National Heart Lung and Blood Institute, challenges decades of conventional wisdom in the MRI field. Increasing the speed and magnitude of gradients has been a long-sought goal in the medical imaging community. "Prior clinical studies concluded that nerve stimulation prevented the use of strong gradient pulse sequences," commented Fricke. He characterized the speed breakthrough as both metaphorically and literally "breaking the sound barrier," since the higher MRI frequency is beyond human hearing ability.

The ultra-strong and ultra-fast gradient technology to break the MRI sound barrier was produced with industry-leading instrumentation created by Weinberg Medical Physics LLC, an R&D lab in Bethesda, Md. Last week, the company was granted a patent for nonstimulating magnetic gradient generation methods. 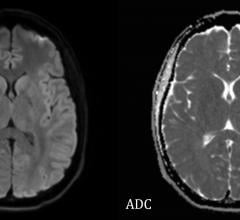