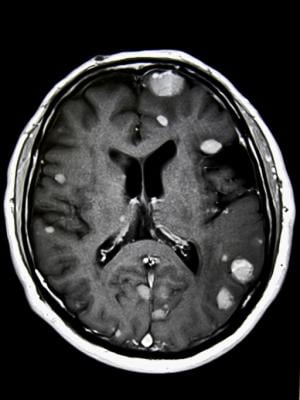 May 10, 2022 — A new clinical guideline from the American Society for Radiation Oncology (ASTRO) provides guidance on the use of radiation therapy to treat patients with brain metastases. Evidence-based recommendations guide the multidisciplinary planning and delivery of advanced radiation therapy techniques to manage intact and resected brain metastases from non-hematologic solid tumors. The guideline, which updates ASTRO’s original 2012 guideline to reflect recent research developments, is published in Practical Radiation Oncology.

Brain metastases form when cancer cells spread to the brain from a primary tumor located elsewhere in the body, most commonly lung cancer, breast cancer or melanoma. Brain metastases are the most common type of brain tumors – roughly 10 times more common than primary brain tumors. They develop in 20-40% of people diagnosed with cancer, with approximately 200,000 new cases diagnosed in the U.S. each year.

Radiation therapy is commonly used to manage brain metastases, prolong survival and provide relief from headaches, dizziness and other neurological problems these tumors can cause. Whole-brain irradiation, however, is associated with cognitive deterioration. To reduce these adverse effects and preserve patients’ quality of life, researchers developed advanced radiation therapy techniques including stereotactic radiosurgery (SRS) and hippocampal avoidance whole brain radiation therapy (HA-WBRT) that result in fewer side effects. These treatments deliver therapeutic doses of radiation to the tumors while limiting exposure to healthy brain tissue.

“In the decade since the previous ASTRO brain metastases guideline, there has been a tremendous evolution in the way we manage patients’ disease. The development of stereotactic radiosurgery allowed treatment of limited brain metastases alone, often in a single fraction, while largely sparing the surrounding brain. Additionally, novel techniques such as hippocampal avoidance with whole-brain radiation can greatly improve our patients’ quality of life,” said Paul D. Brown, MD, chair of the guideline task force and a professor of radiation oncology at the Mayo Clinic in Rochester, Minnesota.

Recent developments to manage brain metastases also include advances in neurosurgical care as well as emerging systemic therapies that may serve as alternates or adjuncts to radiation therapy and surgery. Chemotherapy traditionally has not been a common treatment for brain metastases due to the impenetrability of the blood-brain barrier, but newer medicines such as targeted therapies and immunotherapy show potential to circumvent this hurdle.

“With the emergence of novel radiotherapy techniques and technologies, brain-penetrating drug therapies and neurosurgical interventions, modern management of brain metastases has become increasingly personalized, complex and multidisciplinary. We developed this guideline to help inform and guide clinicians in patient-centered, multidisciplinary care for their patients with brain metastases,” said Vinai Gondi, MD, vice chair of the guideline task force and director of research and education at the Northwestern Medicine Cancer Center and Proton Center in Chicago.

The guideline was based on a systematic literature review of articles published through September 2020. The multidisciplinary task force included radiation, medical and neurosurgical oncologists, a radiation oncology resident, a medical physicist and a patient representative.

This guideline task force included representatives from the American Association of Neurological Surgeons/Congress of Neurological Surgeons, the American Society of Clinical Oncology (ASCO) and the Society of Neuro-Oncology (SNO). ASTRO, ASCO and SNO also published a joint guideline in 2021 with clinical recommendations for surgery and systemic therapy, as well as radiation therapy, for the multidisciplinary treatment of patients with brain metastases. The ASTRO guideline update in Practical Radiation Oncology is intended to be a complement to that joint guideline, to provide more comprehensive detail about radiation therapy.