U.K. study finds that adding an MRI scan increased accuracy of diagnosis in nearly all cases compared to ultrasound alone; second scan corrected diagnosis in a quarter of cases 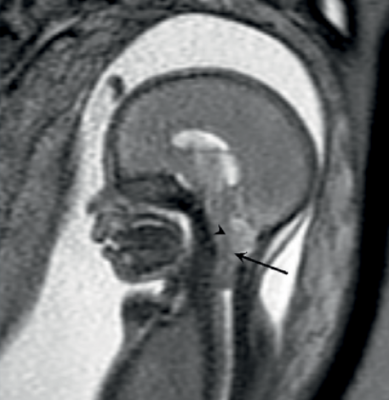 January 5, 2017 — An extra scan using magnetic resonance imaging (MRI) could help more accurately detect brain abnormalities and give more certainty for parents whose mid-pregnancy ultrasound scan showed a potential problem, according to a study published in The Lancet.

The study involved 570 women whose mid-pregnancy ultrasound scan revealed a potential brain abnormality in the fetus. Within two weeks of their first scan they were given an extra scan using MRI, which increased accuracy of the diagnosis meaning almost all scans (93 percent) were correct. This extra information helped doctors give a more accurate diagnosis and advice to parents.

In comparison, the mid-pregnancy scan alone was correct in two-thirds of cases (68 percent). The accuracy of the scans was confirmed by scanning babies after birth or by autopsy for miscarriages and terminations.

"This study is the first of its kind and has shown that adding an MRI scan when a problem is detected provides additional information to support parents making decisions about their pregnancy." said lead author Prof. Paul Griffiths from The University of Sheffield, U.K. "Based on our findings we propose that an MRI scan should be given in any pregnancy where the fetus may have a suspected brain abnormality."

In the study, doctors analyzing the MRI and ultrasound scans were asked to rate how confident they were of their diagnosis. The study also analyzed how the MRI result changed the prognosis and advice given by doctors.

Overall MRI scans were accurate in almost all cases (93 percent) compared with around two-thirds (68 percent) for ultrasound. They also corrected the diagnosis from ultrasound in a quarter of cases (25 percent, 144 of 570).

The MRI gave extra information about the brain abnormality in half of cases (49 percent, 387 of 783). For example, in one case the MRI confirmed the ultrasound diagnosis and identified an additional abnormality. This information allowed doctors to give parents a more certain outlook, halving (55 percent) the number of cases in the 'unknown' prognosis group and increasing the number of pregnancies predicted to be 'normal' (135 percent), 'favorable' (18 percent) or 'poor' (56 percent).

Doctors agreed that the extra MRI scan changed the outlook for the pregnancy in at least a fifth of cases (20 percent, 157 of 783). And as a result this changed how the pregnancy was managed in one in three cases (34 percent, 269 of 783), with terminations offered in an extra 11 percent of cases (84 of 783) after the MRI and parents seeking counselling in 15 percent more cases (115 of 783).

Doctors using MRI were more confident of their diagnosis, saying they had 'high confidence' in 95 percent of cases (544 of 570), compared with 82 percent (465 of 570 cases) for doctors using ultrasound. In addition, 95 percent (257 of 270) of mothers said that they would have an MRI scan if a future pregnancy showed a brain abnormality and around 80percent (227 of 277) said that the information from the scan helped them better understand their baby's condition.

The researchers note that there will be further analysis of the trial's results, including a health economics analysis, to confirm if the extra scan should be used routinely. Within the study, two fetuses (of 570, less than 1 percent) were diagnosed correctly by the ultrasound and incorrectly by the MRI. Only cases identified by the ultrasound scan were given the extra MRI, so any cases where an ultrasound did not identify an abnormality would not have been included in this study.

Writing in a linked comment Prof. Rod Scott, University of Vermont, said, "Accurate diagnosis of significant brain abnormalities has important therapeutic implications. Consequently, it is essential that tools used for prenatal diagnosis are rigorously evaluated... This trial strongly supports the view that iuMRI is an excellent technique, and it should be incorporated into clinical practice as soon as possible."

The study was funded by the National Institute for Health Research Health Technology Assessment programme. It was conducted by scientists from University of Sheffield, Newcastle University, University of Birmingham, Birmingham Women's Foundation Trust and Leeds Teaching Hospitals NHS Trust.