This figure shows reduced hippocampal volume over the course of 6 years as seen on progressive volumetric analysis and also coronal MRI evaluations (arrows).Progressive volume loss in the mesial temporal lobe on MRI is a characteristic imaging feature of AD. This patient was a case of Alzheimer’s Dementia.

Hippocampal volume increase from baseline in a depressed patient who underwent a brain health intervention program at UCLA involving increased physical activity and cognitive training. Over the course of one year, hippocampal volume increased by 4.6 percent at the second time point with decreased irritability following depression treatment. The patient had an amyloid positive PET scan and experienced cognitive decline over the following 2 years with concurrent decreased hippocampal volume. Neuropsychological testing was at the first percentile for memory by 2017. Image courtesy of Somayeh Meysami, M.D., Cyrus A. Raji, M.D., Ph.D., Verna R. Porter, M.D., et al. 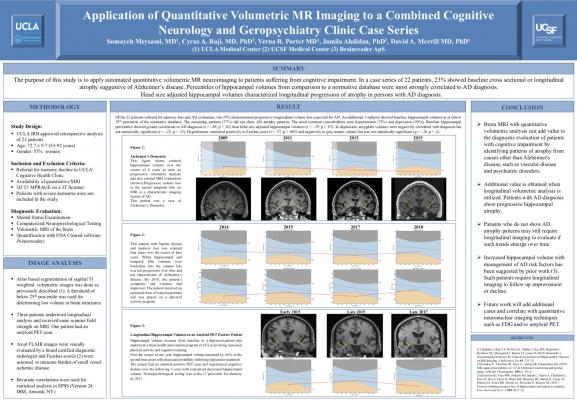 June 12, 2018 — According to a UCLA Medical Center study, a new technology shows the potential to help doctors better determine when memory loss is caused by treatable issues other than Alzheimer’s Disease. The study was presented at the 2018 American Academy of Neurology Conference, April 21-27 in Los Angeles.

Alzheimer’s is the most common cause of memory problems in the elderly, but there are several treatable problems with similar symptoms, including vascular diseases such as hypertension, alcohol use and psychiatric disorders.

The new technology was the U.S. Food and Drug Administration (FDA)-cleared Neuroreader volumetric software. The software was applied to traditional magnetic resonance imaging (MRI) scans to analyze 22 patients, and found that only five showed brain shrinkage patterns characteristic of Alzheimer’s. The majority of the remaining cases were a combination of other causes, such as bipolar disorder and vascular disease.