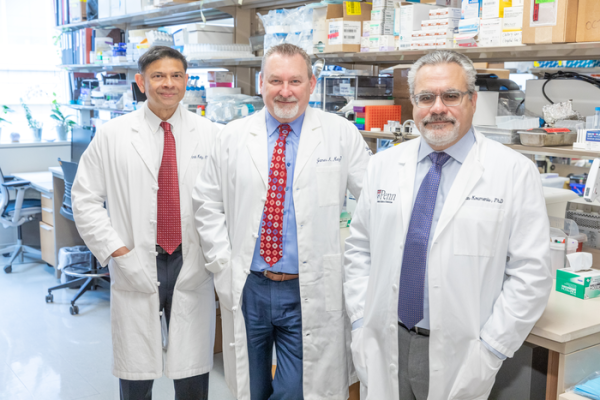 March 1, 2022 — With more than $12 million in new funding from the National Institutes of Health (NIH), the Abramson Cancer Center at the University of Pennsylvania will build on its preclinical research of an emerging form of radiation that provides ultra-fast doses—of under a second, compared to several minutes with conventional radiation—and shows promise of greater protection of normal tissue, thereby minimizing toxic effects to the body.

The Department of Radiation Oncology will use the $12.3 million, five-year NIH grant to compare the ability of proton, carbon and electron radiotherapy to protect normal tissues from harmful effects while controlling or eradicating solid tumors of the gastrointestinal tract, lungs, soft tissues throughout the body, and bones.

This research will include delving deep into the molecular mechanisms that cause toxicity and to help minimize these effects on normal tissue, so that the new technology—called FLASH, due to its incredible speed—can move toward clinical trials.

Early animal studies, primarily in Europe and the U.S., including at Penn, have shown that when the same dose of radiation is delivered at a much faster rate, it tends to reduce injury to normal tissues while being equally potent against tumors. This could revolutionize radiotherapy, as critical organs near tumors can be spared, reducing toxicity to the body. Moreover, FLASH radiotherapy can be delivered in one to three treatments compared to 20, 30 or more treatments typically delivered with conventional radiotherapy.

“For decades, radiation oncologists had to administer a fraction of the total dose of conventional radiotherapy each time to minimize toxicity to healthy tissue surrounding tumors. However, FLASH radiotherapy has demonstrated a sparing effect of some normal tissues in animal models without compromising its anti-tumor action when delivered all at once,” said Constantinos Koumenis, PhD, the Richard H. Chamberlain Professor of Radiation Oncology at Penn and co-principal investigator. “Based on early promising results in animal models, we plan to study the mechanism of action of FLASH radiotherapy, and ways to deliver it safely.”

Proton radiation painlessly delivers radiation through the skin from a machine and, in many situations, has an advantage over X-ray therapy because it delivers less radiation to normal tissues that lie past the tumor. In contrast to current clinical electron beam therapy, which can treat only less invasive tumors, protons are able to treat deep-seated cancers.

“We are intrigued by the mechanism of action of FLASH radiotherapy, and we appreciate the NIH recognizing us as leaders in this area with strong expertise in radiobiology and radiation oncology to study it further in our state-of-the-art research facilities,” said Amit Maity, MD, PhD, the Morton Kligerman Professor of Radiation Oncology at Penn and co-principal investigator. “A great deal remains to be done to better understand under what conditions FLASH radiation is able to reduce normal tissue injury and how it does so, and the work proposed in this grant will be a major step forward in this direction.”

Penn’s research team features more than 30 scientists, including biologists, physicists, and clinicians, and for this NIH funded program, they will collaborate with scientists from Duke University, Oxford University, and the University of Heidelberg.

“We hope to understand the best method for administering FLASH radiotherapy with shorter duration of treatment, decreased frequency of therapy, and reduced impact to healthy tissue,” said James Metz, MD, chair of Radiation Oncology and leader of the Roberts Proton Therapy Center at Penn. “We envision FLASH radiotherapy not as a complete replacement for conventional radiotherapy, but as a valuable tool in the hands of radiation oncologists to treat specific solid tumors in which it would be best indicated.”

The grant consists of four projects, including observation and treatment of osteosarcoma in dog patients, as a potential precursor to human clinical trials. Researchers will also compare the relative effectiveness of FLASH radiotherapy to conventional proton therapy and electron and carbon radiation to better understand molecular mechanisms which underlie how normal tissue can be spared from treatment effects.