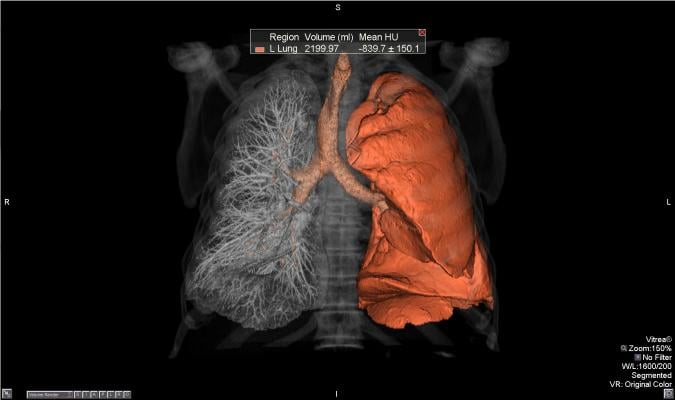 October 6, 2015 — A novel computer-aided detection (CAD) scheme based on a hybrid multi-classifier method could enhance early detection of lung nodules on computed tomography (CT) images and help in the earlier diagnosis of lung cancer, suggests new research. The research was published in the September issue of Medical Physics, the monthly journal of the American Association of Physicists in Medicine (AAPM).

Every year 160,000 people die of lung cancer, making it the number one cancer killer. Early detection and treatment of lung cancer is key to saving lives. The National Lung Screening Trial (NLST) — which was launched in 2002 and enrolled 53,454 high-risk subjects at the time of reporting — showed a 15 to 20 percent lower risk of dying from lung cancer when screened using low-dose CT scans compared to the chest X-rays. However, reading the large number of CT scans can be a burden for a radiology practice. The CAD method with high sensitivity and specificity could help reduce both the number of nodules that could be missed but may be lung cancer, as well as the number of false positives that are unnecessarily followed up and/or biopsied.

“A big challenge of CAD for lung cancer screening is the wide diversity of lung nodule morphology seen on CT,” said Lin Lu, Ph.D., first author of the article and postdoc research fellow at Columbia University Medical Center, New York. “Our strategy is to categorize and partition nodule candidates into different groups based on their location, size and shape, so that each group possesses more homogenous morphological characteristics of nodules and can be assigned a more appropriate algorithm to improve the performance of CAD.”

In the study, researchers evaluated 631 lung nodules on 294 CT scans from the National Cancer Institute’s Lung Image Database Consortium (LIDC) database, which were acquired to facilitate a test-bed for CAD algorithms. The image data sets were randomly divided into two independent subsets: a training set of 196 scans and a test set of 98 scans. The hybrid method achieved a sensitivity of 87 percent with 2.61 false positives per scan on the training dataset and a sensitivity of 85.2 percent and 3.13 false positives per scan on the testing dataset. The hybrid method was compared to and outperformed six recent CAD schemes.