Managing Architectural Distortion on Mammography Based on MR Enhancement 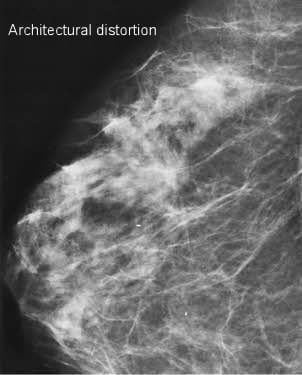 May 15, 2019 — High negative predictive values (NPV) in mammography architectural distortion (AD) without ultrasonographic (US) correlate or magnetic resonance imaging (MRI) enhancement suggests follow-up rather than biopsy may be safely performed, according to a new study. The study was presented at the American Roentgen Ray Society (ARRS) 2019 Annual Meeting, May 5-10 in Honolulu.

Management of MG-detected AD varies among practices when tomosynthesis-guided biopsy is not available. The study was conducted to evaluate outcomes of architectural distortion on mammography (MG) with or without a magnetic resonance (MR) correlate.

The results indicate that follow-up rather than biopsy may be safely performed in cases of MG AD without US and MRI correlate or enhancement, reducing the need for intervention and lowering healthcare costs.

"With 3-D tomosynthesis widely incorporated in many practices, MG AD without US or MRI correlate poses a management dilemma to radiologists," author of the study Vandana Dialani, M.D. said. "This study is especially important for institutions which do not have tomo-guided biopsy capabilities and may revert to contrast imaging as a next step in managing MG AD. Our study shows that the NPV of MG AD without US correlate or MR enhancement was 100 percent and follow-up rather than biopsy may be considered."