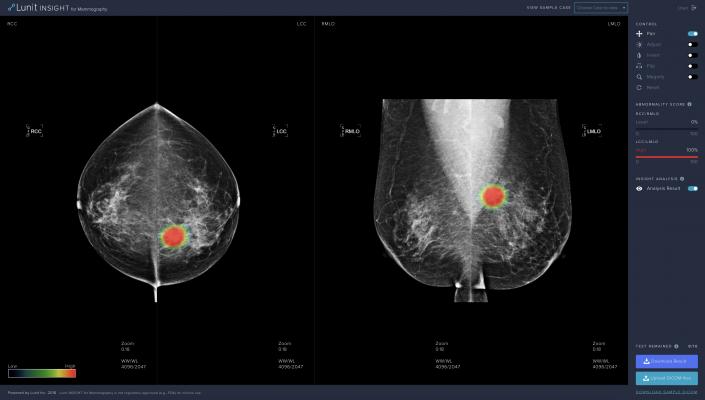 According to Lunit, the product is soon to be available for commercial sales, as the company is expecting to gain regulatory approvals in different regions. Lunit CEO Brandon Suh said Korea Ministry of Food and Drug Safety (MDFS) approval is expected as early as July 2019, followed by European CE approval by September 2019 and U.S. Food and Drug Administration (FDA) approval by early 2020.

Lunit Insight for Mammography was first revealed during the 2018 Radiological Society of North America annual meeting (RSNA 2018), presenting a 97 percent level of accuracy in the detection of breast cancer. Suh noted that false negative rates for mammography range from 10-30 percent, with false positive rates at around 95 percent. According to Suh, this costs more than $4 billion dollars for unnecessary recalls in the U.S. alone. He said that Lunit aims to reduce these costs by pulling more accurate information from accessible basic tests like mammography and use this clinically accurate information to increase efficiency in diagnostics.

Lunit is also developing what it calls a more sophisticated AI solution for digital breast tomosynthesis (DBT). DBT has been demonstrated by various large-scale studies to be superior to mammography in terms of breast cancer screening performance.