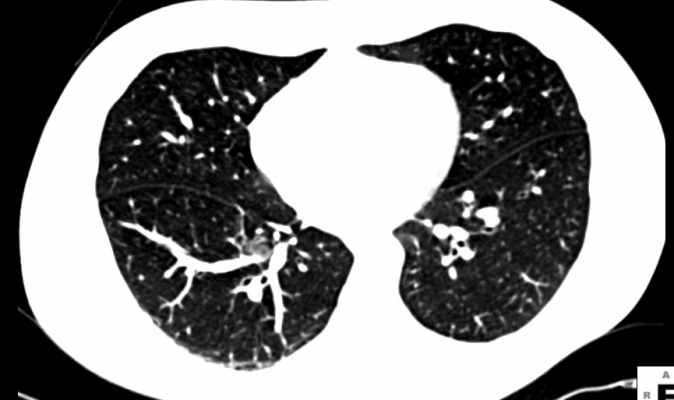 Lung cancer is known for its aggressive nature and ability to spread throughout a patient's body. Cancer cells that enter the blood stream are known as circulating tumor cells (CTCs). While the current standard of care following treatment for locally advanced NSCLC is for patients to get surveillance CT or PET/CT scans to monitor for cancer recurrence, new tests can track elevated CTC counts through a simple blood test, allowing for more frequent and less invasive follow-up. Other biomarkers, such as circulating tumor DNA (ctDNA), also have been studied in lung cancer, although ctDNA trials have been largely restricted to advanced (i.e., metastatic) disease, which is not amenable to curative treatments. By using CTC counts as a biomarker for recurrence in localized disease, treatment teams may be able to diagnose recurrence significantly earlier than they could with imaging scans alone.

"The additional lead time afforded by an earlier diagnosis may enable doctors to better tailor alternative and salvage treatments to improve their patients' outcomes and quality of life. Earlier detection of recurrence may even translate into an increased likelihood of curing these patients when their tumor burden is lowest and thus more likely to respond to therapy," said Chimbu Chinniah, lead author of the study and a research fellow in radiation oncology in the Perelman School of Medicine at the University of Pennsylvania in Philadelphia.

A total of 48 patients with stage II-III locally advanced NSCLC were enrolled in the prospective clinical trial. All patients were treated with concurrent chemoradiation. Blood samples were obtained before treatment, during treatment (at weeks 2, 4 and 6) and following treatment (at months 1, 3, 6, 12, 18 and 24). Circulating tumor cells were identified by analyzing the samples with an adenoviral probe that detects elevated activity of a specific enzyme that is produced when cancer cells replicate. Surveillance scans with CT or PET/CT imaging were performed at three-month intervals.

At a median follow-up of 10.9 months following treatment for locally advanced NSCLC, nearly half (46 percent) of the patients experienced recurrence or progression, as detected by conventional surveillance scans and biopsies. The median time to recurrence was 7.6 months, with a range of 1.3 to 32 months. Blood samples were obtained following chemoradiation therapy for 20 of the 22 recurrent patients.

Fifteen of these 20 patients had elevated CTC counts following treatment, with a median lead time of 4.7 months and a range of 1.2 months to one year. Of these 15 patients, two-thirds demonstrated a rise in CTC counts an average of six months before PET/CT or CT scans detected the recurrence. For many patients, CTC levels were negative immediately following treatment but rose subsequently in the months following treatment. While most of these CTC level rises occurred before disease recurrence was identified on imaging, four of the 20 patients experienced recurrences that were detected with imaging before elevated CTC levels indicated the disease had returned.

"The future use of circulating tumor cells as a diagnostic and prognostic tool for localized NSCLC looks promising. Although imaging remains the cornerstone of post-treatment surveillance for patients, blood tests could, and perhaps should, be used in conjunction with imaging scans to better monitor patients during their follow-up period after treatment," said Charles B. Simone, II, M.D., the study's senior author and principal investigator, as well as an associate professor of radiation oncology at the University of Maryland School of Medicine and medical director of the Maryland Proton Treatment Center in Baltimore.