Use of Breast MRI Screening in Women With Dense Breasts

Interview with Professor Christiane Kuhl, M.D., director of radiology, University Hospital Aachen, Germany, on the use of MRI breast screenings

Dense breast tissue can hide cancers in mammograms in about half of women. Supplemental imaging is often needed to accurately diagnose these patients, avoid false positives and avoid needless tissue biopsies. Breast ultrasound and breast magnetic resonance imaging (MRI) can be used to see through dense tissue to better identify cancers and avoid the need for many biopsies, however, MRI offers more specificity. 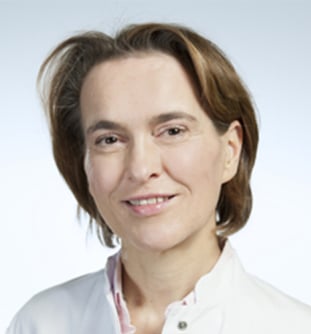 ITN: Can you give us an overview of breast density and the role that breast MRI plays in screening patients?

Dr. Kuhl: It is, I think, well known and well established that the sensitivity, or diagnostic accuracy as a whole, of mammographic screening deteriorates with increasing breast density. So, we have more chances to find given breast cancer with mammography in case the woman has dense breasts. In addition to that, we know that dense breast tissue is an individual risk factor for the increased risk of breast cancer. So we have two effects we have a higher risk to develop breast cancer and lower chances to find that cancer with morbidity, which is the reason why we have the breast center legislation, at least in the United States — not in Europe — that women must be informed about the diagnostic and prognostic implications of dense breast tissue on mammography. The alternative imaging technologies that we can use for these patients is ultrasound, tomosynthesis mammography and breast MRI.

Tomosynthesis, 3-D mammography, has been out there for a couple of years and I think it has replaced screening mammography largely as a primary screening tool. We know that tomo reduces the recall rate because it helps you improve and reduce the false positive rates. It is helpful to just distinguish two findings from tissue superpositions, but the added cancer yield of tomosynthesis has always been limited, to say the very least. We also have evidence to say that specifically in women with extremely dense breasts, where the breast is homogeneously composed of breast tissue, that tomo is not helpful. You need fat because it is the only contrast agent, so to speak, on a mammogram, and you need some fat to display the difference between a tumor and adjacent fiber glandular tissue. When there is no fat, then even a cross sectional imaging method, or quasi cross sectional imaging method like tomo, won't be of help. So, we are left with ultrasound and MRI.

Ultrasound has been an imaging method that has been tested for supplemental use in screening for women with dense breasts for decades now. So, we have some solid data that show that we can find an additional like 4 per 1,000 breast cancers when we concentrate on women with breast. The problem with ultrasound is twofold. In my experience, ultrasound takes a long time to acquire when you do an appropriate screening ultrasound. In Wendie A. Berg’s trial published in JAMA,[1] it said that an ultrasound study takes about 20 minutes time, which is prohibitively long, and that actually would mean ultrasound would be one of the most expensive imaging methods. Another problem with ultrasound is the very low positive predictive value and the high rates of false alarms. This has led to unnecessary biopsies that we recommend, because we think there might be breast cancer based on ultrasound, when in most cases it is just a benign change.

So this has led to the fact that there was a large interest in using breast MRI for these women. We have seen the DENSE Trial being published in November 2019 that used MRI as a supplemental screening tool in addition to mammography on women with dense breast.[2] The DENSE Trial found that when we do so, when we add MRI to mammography, that we can reduce the interval cancer rate from over 5 per 1,000 to lower than 1 per 1,000. This is a huge success. It almost eliminates interval cancers, in other words cancers that are being diagnosed after a seemingly normal last mammogram that the that then pop up as palpable lumps. For the longest time, people thought that you cannot avoid interval cancers because people observed that these cancers were biologically aggressive and rapidly growing, so people thought that they might have been developed just after the last mammogram.

But as a matter of fact, since we started using MRI for screening, it has been shown by several groups that you can avoid interval cancers almost altogether. This proves that it's not true to say that interval cancers develop after the last mammogram, but it's just false negative mammographic screening simply because specifically rapidly growing cancers are very difficult to find with mammography, especially in women with dense breasts. With screening mammography, usually the interval cancer rate is between 25 and even 40% of cancers that rise in women who actually participated in screening mammography. So, almost half will not be diagnosed with mammography and the range is explainable by breast density.

ITN: What are some of the barriers to using breast MRI and how can these be overcome?

Dr. Kuhl: So MRI seems to be very helpful. The problem is, of course, it's a very expensive imaging method and also complicated, and not tolerable by everybody to stay in a magnet for half an hour or so. In 2014, we presented a paper on, abbreviated MRI, where we just reduced the acquisition time down to about three minutes or so. We were able to show that if you do so that you still have the same diagnostic accuracy as with conventional, full protocol breast MRI.[3]

And since then, a bunch of studies, I think totaling 25 or 27 studies, have been published that confirmed that you can use abbreviated MRI for this purpose. And now recently in January 2020, the ECOG/ACRIN EA 1441 trial was published in JAMA,[4] where we present the results of a large multi-center trial where we compared the cancer detection rate of abbreviated MRI directly with tomo and found MRI is still two and a half times as sensitive as is tomo. We again had an interval cancer rate of zero, and only high-grade invasive cancers were found by tomo. And importantly, a factor that should be consider for future clinical trials, we again found that in women who did undergo MRI, and also abbreviated MRI, the additional use of tomo or mammography did not increase the cancer detection rate.

So maybe in the future, we may use abbreviated MRI as an alternate screening method, not as a supplement, to effectively avoid under-diagnosis and interval cancer rates in women with extremely dense breasts.

ITN: With your patient selection for MRI. Is it best maybe to go through and do your standard mammography, and then separate those patients out with higher BI-RADS scores for MRI?

Dr. Kuhl: I think that the usual way to proceed is that a woman undergoes a screening mammogram to start with, provided that she doesn't have a family history that puts at a higher risk of breast cancer and would therefore qualifies her for a screening MRI. You look at her density and it is beyond an 80, or breast density is C or D, then people will usually recommend additional or alternate screening. That's the way people usually proceed. You have to say that for the time being, really that MRI is not yet a routine tool. We need some more data, specifically when it is used as a standalone screening method, without mammography. There's also the DENSE Trial, which used MRI only has a supplemental mammography. We don't have results regarding the DENSE Trial, whether they were able to do the analysis and see how good was MRI alone compared with mammography.

So that's why we're just preparing a large clinical trial in Germany where we would like to compare the abbreviated MRI with regular screening mammography in women with dense breasts.

ITN: You had some clinical images of breast MRI, can you go through some of those to show some examples?

Dr. Kuhl: So you perform an MRI before you eject the contrast and repeat the same image with the contrast. A bright white spot from the contrast will appear at the site of a cancer, which is highlighted by subtraction, or fat supression, imaging. And then you use routine tools, the maximum intensity projection (MIP) is a routine tool to fuse all images into one single image, which can then rapidly be reviewed by a radiologist. The time to read the MIP images is fast, like three seconds or so, because it's a high contrast situation. To say this is a black breast doesn't take a lot of scrutiny (black would be normal breast tissue).

Example of a contrast MRI, left, and MIPs image on the right, both clearly showing a breast cancer.

All of these case examples I will show you use an abbreviated breast MRI protocol.

In this first mammogram case she is an ACR BI-RADS C breast, so not entirely dense. And on the MRI you can easily see there is a large ductal carcinoma in situ (DCIS) on the right breast.

Case 2  showing mammogram vs. breast MRI that shows a small breast cancer that is masked on the mammogram by dense tissue

This second case is an ARC B breast mammogram. On the MRI she has a small breast cancer.

Case 3 shows a very dense breast mammogram completely hides a tumor that is clearly seen on a breast MRI exam.

This third case is a very difficult breast to read with architectural distortions on the mammogram. There are no calcifications. I would say this is an ACR BI-RADS D breast. You can see on the MRI she has multi-focal breast cancer. 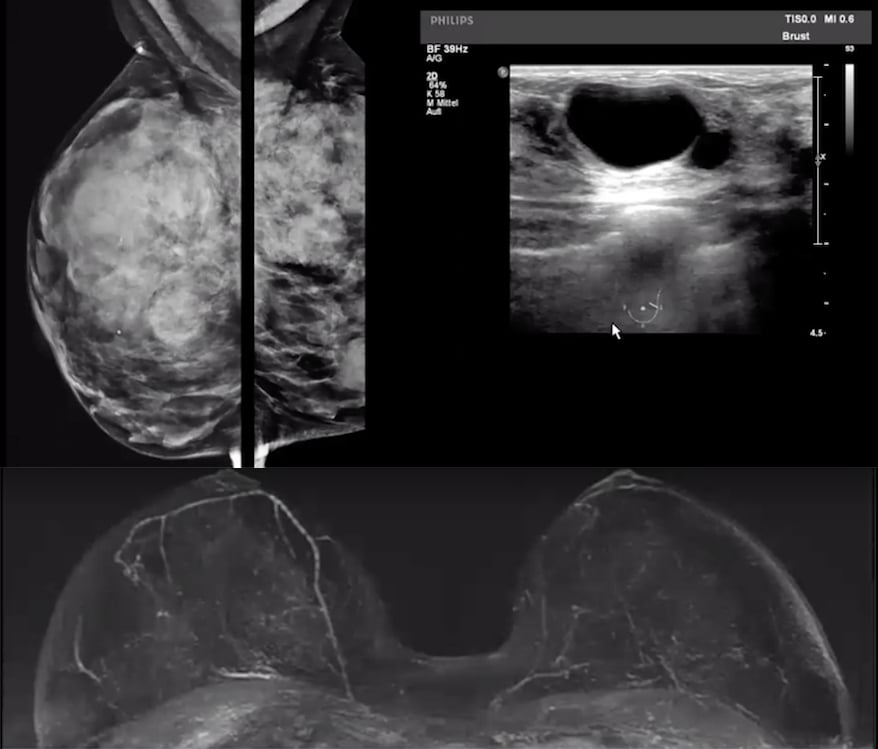 In this fourth case, she has a lumpy, bumpy breast so we scanned her on ultrasound. We were scanning her for what seemed like hours, and she ended up with a BI-RADS 4 on both sides. She had a mammogram that you can't even use for screening. On ultrasound you have what's positive on both sides. The radiologist spent on this was 21 minutes to review. On MRI she's negative, and it only takes you seconds to say it is a true negative. 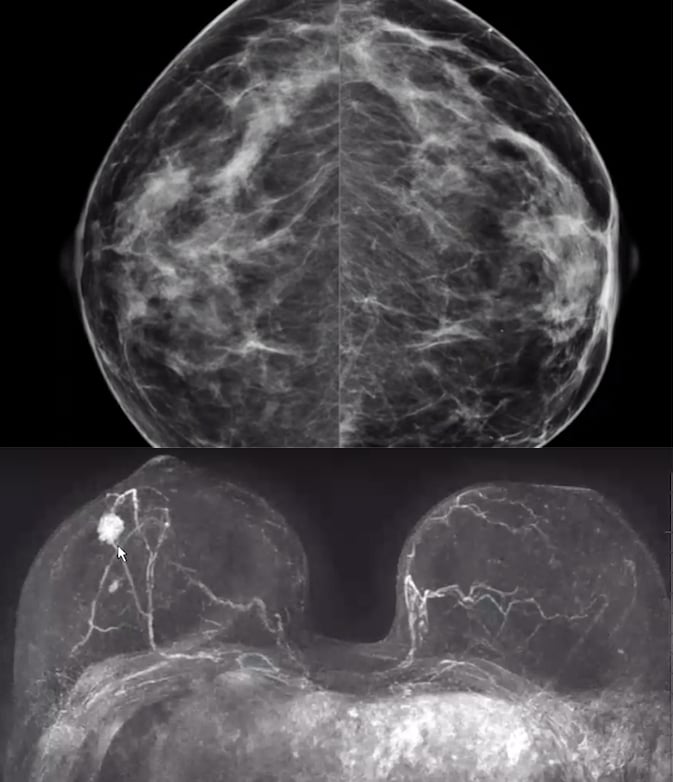 Case 5. Mammogram versus breast MRI to show a cancer in a patient with very dense breast tissue.

In this 5th case of a 66-year-old women, her MRI clearly shows a bifocal cancer.