With the incidence of breast cancer on the rise, it is critical to explore alternative imaging modalities

A comparison of a standard mammogram of a woman with dense breast tissue and her breast MRI, clearly showing a cancer that is not visible on the mammogram. Image from Christiane Kuhl, M.D.

The incidence of breast cancer is rising globally, with an estimated 1 in 8 women diagnosed in their lifetime and 40,000 expected to die from breast cancer in 2018 alone.1 Detecting cancers early, when more treatment options are available and likely to be effective, is critical. This is why breast health professionals have long urged women age 40 and older to have their annual screening mammogram. For some women, however, a simple mammogram may not be enough to catch cancer before it grows. This has led to the growing importance of alternative imaging modalities to try to improve cancer detection rates, led by breast magnetic resonance imaging (MRI).

MRI was initially brought into the field of breast cancer screening because of its ability to see inside breast tissue more clearly than mammography, with numerous studies revealing a higher sensitivity and specificity than the latter. Perhaps even more importantly, breast MRI offers a way to potentially improve detection of suspicious lesions without the harmful side effects of ionizing radiation.

1.    Women with known or disease-causing BRCA1 mutation (or their untested first-degree relatives) should begin annual MRI at age 25. If MRI is performed annually, there is emerging evidence that the benefit of mammography is relatively small in such women prior to the age of 40;

2.    Women with other known disease-causing mutations (or their untested first-degree relatives), and those with a calculated lifetime risk of 20 percent or more, should begin annual MRI between age 25 and 30. Annual mammography is of benefit in those with BRCA2 mutations;

3.    Women with prior chest/mantle radiation therapy (cumulative dose of ≥ 10 Gy) before age 30 should begin MRI and annual mammography at age 25 or at least 8 years after completion of radiation, whichever is latest; and

4.    Women with a calculated lifetime risk of breast cancer of ≥ 20 percent. The Tyrer-Cuzick model was discussed by the ACR as the most comprehensive and consistently accurate model for predicting risk and now includes fibroglandular breast density as a risk factor, though all models may over- or underestimate risk for a given individual.

While high-risk women have traditionally been the poster children for breast MRI, a 2017 study suggests the exam could be beneficial for average-risk women too. Among 2,120 women with a lifetime breast cancer risk of less than 15 percent, MRI found 60 additional cancers (40 invasive) for an overall supplemental cancer detection rate of 15.5 per 1,000 women. Most significantly, 59 of the 60 cancers were only found with MRI.2

“The faster a cancer grows and the better it is in seeding metastases, the better will it be picked up early by MRI,” said Christiane Kuhl, M.D., chair of the Department of Radiology at RWTH Aachen University in Aachen, Germany, and the lead study author. “In our cohort, cancers found by MRI alone exhibited features of rapid growth at pathology.”

Despite the advantages breast MRI offers, clinical evidence reveals the technology has yet to gain widespread use, at least in the U.S. A recently published study looked at a cross-section of more than 400,000 women across the U.S. who were receiving routine mammograms, investigating how many also received breast MRI exams. The study found 43.9 percent of women at high lifetime risk of breast cancer attended a facility that offered on-site breast MRI screening; however, only 6.6 percent of this group actually obtained an MRI within two years of their screening mammogram.3

“Although professional guidelines recommend breast MRI for diagnosis and in some cases even for screening, women aren’t fully aware of the advantages of MRI for their diagnosis. They won’t ask for it themselves,” said Martijn Hartjes, senior director, head of global MR marketing at Philips Healthcare.

Part of the problem may be a lack of awareness among patients of the availability and benefits of breast MRI, and the way this is communicated. A 2017 study split mammography patients at the Invision Sally Jobe Breast Centers into two groups: For the first group, a recommendation for follow-up MRI was communicated only to the referring physician; for the second group, the recommendation was given to the referring physician and the patient. Patients in both groups had a high lifetime risk of breast cancer (greater than
20 percent according to the Gail model risk assessment). The research team found that follow-up screenings increased significantly when patients were informed directly.4

While clinical research suggests breast MRI could be beneficial for a large portion of the population, practical realities have kept the modality out of reach for many. MRI scans themselves are expensive and often not covered by insurance providers. In addition to high upfront costs, the exam can carry significant downstream costs, especially if MRI-guided biopsies are indicated for suspicious lesions. Moreover, from the patient’s perspective, an MRI exam can be an unpleasant experience, forcing them to remain completely still in an enclosed space for up to
60 minutes or more at a time.

In the last several years, separate research endeavors in the United States and Europe have looked to create new acquisition sequences that could drastically reduce the length of MRI scans. In the U.S., a team led by David Strahle, M.D., chairman of Regional Medical Imaging in Flint, Mich., developed an abbreviated protocol for a 7-minute breast MRI scan, which was published in 2017. The study evaluated 671 women with previous negative mammograms, with an eye toward identifying any lesions — cancerous or not — that had not been detected in the first screening. Among this group, MRI exams identified a surprising 452 lesions that mammograms had failed to spot; 17 lesions were recommended for biopsy, with seven found to be malignant.5

Strahle and the team used this data to identify four high-yield MRI acquisition types — T2, T1-pre-contrast, T11.5 and T16 — to make up an abbreviated protocol. The new protocol yielded a scan time of just 7.5 minutes compared to 24 minutes for a full diagnostic MRI.5

Kuhl was the leader of the European project. The single-center study evaluated 606 MRI studies of 443 women with two different protocols:

Using the abbreviated protocol, Kuhl and her team were able to reduce acquisition time from 17 minutes to 3 minutes. Furthermore, interpretation time was cut dramatically, from an average of
2-4 minutes for digital mammography to 28 seconds for MRI.6

Beyond the clinical research efforts to discover new effective short sequences, several of the major MRI vendors have added a form of compressed sensing to their systems’ functionality.

Iterations of compressed sensing among the major MRI vendors include:

•    Philips introduced Compressed SENSE, which according to Hartjes enables MRI scans to be performed up to 50 percent faster than other Philips MRI systems while maintaining high image quality.

•    Siemens Healthineers received U.S. Food and Drug Administration (FDA) clearance for its Compressed Sensing MRI technology in early 2017. According to the company, the technology incorporates an efficient inline reconstruction algorithm so the acquired data is calculated directly at the MRI scanner, requiring no export or external processing of that data.

VIDEO: The Impact of COVID-19 on Breast Imaging 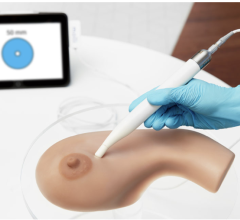