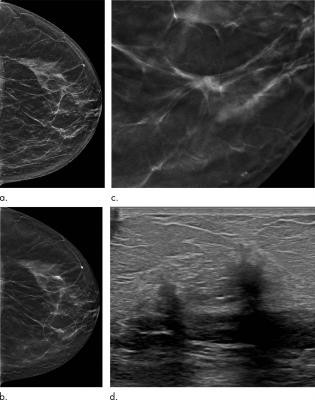 Images in a 57-year-old woman noted to have "good prognosis" invasive cancer detected at digital breast tomosynthesis (DBT) screening. (a) Craniocaudal view of the left breast obtained with the two-dimensional digital mammography (DM) portion of the DM/DBT screening study demonstrates a subtle area of distortion in the medial left breast. (b) Single-slice image from the left craniocaudal DBT portion of the screening study shows an area of bridging distortion (circle). (c) Electronically enlarged image of the area of concern seen on the left craniocaudal view in a single DBT slice as shown in b. (d) Targeted US scan demonstrates two small adjacent irregular solid masses. US-guided core biopsy yielded an invasive carcinoma of the tubular subtype that was estrogen receptor positive, progesterone receptor positive, and human epidermal growth factor receptor 2 negative. The results of the sentinel node biopsy were negative. Image courtesy of the Radiological Society of North America

March 11, 2020 — A new study published in the journal Radiology has found that the advantages of digital breast tomosynthesis (DBT) over digital mammography (DM), including increased cancer detection and fewer false positive findings, are maintained over multiple years and rounds of screening. In addition, research showed that DBT screening helped detect a higher proportion of poor prognosis cancers than DM.

DBT, sometimes called 3-D mammography, emerged in the last decade as a powerful tool for breast cancer screening. The procedure uses an X-ray tube that moves in an arc and takes low radiation-dose projections of the breast from different angles. Varying the angle allows for multiple data points that can be reconstructed in different ways.

"As a radiologist, tomosynthesis allows viewing of the breast in multiple layers or slices," said study lead author Emily F. Conant, M.D., professor and chief of breast imaging in the Department of Radiology, Perelman School of Medicine at the University of Pennsylvania in Philadelphia. "This ability to scroll through slices of otherwise overlapping breast tissue helps us not only detect more cancers but also better characterize benign or normal areas of the breast."

Numerous studies have shown that DBT is superior to DM for cancer detection and reducing recall rate, or the rate at which women were called back for additional imaging based on suspicious initial findings. However, most of the published data on DBT screening have been from first round of screening, an instance when cancer detection rates and recall rates are expected to be higher than with subsequent rounds of screening. Less is known about the performance of DBT over time.

For this study, the research team looked at outcomes for patients over a five-year stretch after they began imaging all their screening patients with DBT in the fall of 2011. The study set included more than 56,000 DBT exams, along with 10,500 prior DM exams. The researchers compared imaging findings with results from local cancer registries.

"We showed that the improved performance with DBT was maintained over multiple years," Conant said. "This is the longest follow-up with cancer registry matching that has been published thus far."

Conant attributed the improved outcomes achieved with tomosynthesis to better visualization of both benign and malignant lesions and a reduction in tissue superimposition.

"With tomosynthesis you can remove some of the overlapping or obscuring breast tissue so that both normal and abnormal findings are better seen," she said. "That provides both improved cancer detection and decreased false positives."

One of the key strengths of the study was its reliance on a diverse population of women. For instance, African American women, who are known to develop more aggressive breast cancer subtypes at an earlier age, made up about half of the study group.

"We found different types of biology in the cancers detected across our diverse population and that's an important takeaway of this paper,"Conant said. "Our results show that we can improve our screening outcomes for younger women with DBT by finding clinically important cancers earlier with fewer false positives."

While more studies with diverse populations and long-term follow-up are needed, the initial findings underscore the strength of tomosynthesis in breast cancer screening.

"This is very promising and important data that certainly can be used to model larger trials," Conant said.