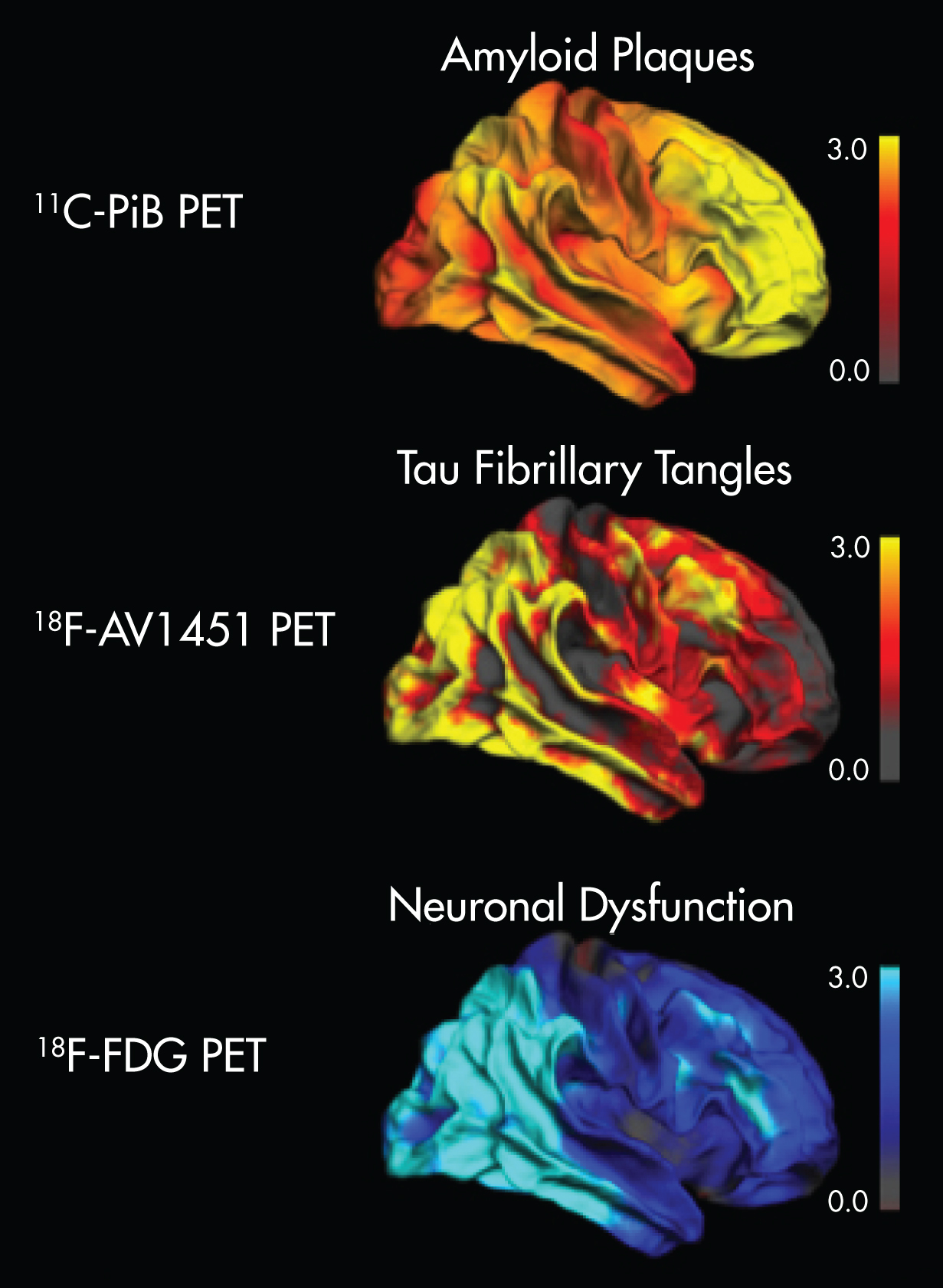 June 20, 2016 — Positron emission tomography (PET) with three different radiotracers can now measure amyloid plaques, tau tangles and metabolic activity in the brains of living Alzheimer’s patients. This multimodal study shows significant correlation between increased tau and decreased metabolic activity in the brain — a clear sign of neurodegeneration — revealed researchers at the 2016 Annual Meeting of the Society of Nuclear Medicine and Molecular Imaging (SNMMI).

Each year, SNMMI chooses an image that exemplifies the most promising advances in the field of nuclear medicine and molecular imaging. The state-of-the-art technologies captured in these images demonstrate the capacity to improve patient care by detecting disease, aiding diagnosis, improving clinical confidence and providing a means of selecting appropriate treatments. This year, the SNMMI Image of the Year was chosen from more than 2,200 abstracts submitted to the meeting and voted on by reviewers and the society leadership.

The 2016 SNMMI Image of the Year goes to a German team of researchers from the University Hospital of Cologne; the Jülich Research Center; and the German Center for Neurodegenerative Diseases. For this study, 10 subjects with Alzheimer’s underwent PET following the injection of three radiotracers: fluorine-18 fluorodeoxyglucose (F-18 FDG), which images regional metabolic activity; carbon-11 Pittsburgh compound B (C-11 PiB), which has an affinity for amyloid plaques; and F-18 AV-1451, an emerging imaging agent that binds to tau in the brain. Results showed that increased tau was directly associated with hypometabolism (reflecting neuronal dysfunction) in the brain. For amyloid-deposition, no strong association with hypometabolism was found. However, an indirect interactivity between tau and amyloid was observed particularly in the parietal cortex, in that the negative impact of regional tau-deposition on metabolism was stronger in regions with higher amyloid-burden.

“It is a big honor for us to receive this prestigious award. It represents a great reward for the entire team and will strongly motivate our group,” said Alexander Drzezga, M.D., of the Department of Nuclear Medicine at the University Hospital of Cologne in Cologne, Germany. “I am convinced that it will encourage particularly the young investigators involved in this project to continue with this type of research in the future. I would like to thank all the members of our team who contributed to this work. The study represents the result of an interdisciplinary effort, involving several clinical departments and scientists from different research centers. Also, I would like to thank all the subjects who participated in the study.”

“Integrating these molecular imaging tools offers the opportunity to investigate the possible independent and synergistic contribution of these protein pathologies in neurodegeneration in the living brain and, therefore, greatly advance our understanding of the mechanisms of Alzheimer’s disease,” Drzezga added.

“We still do not understand fully how these abnormal amyloid and tau protein depositions affect brain functions and cause dementia,” stated Satoshi Minoshima, M.D., Ph.D., chair of the SNMMI Scientific Program Committee. “This Image of the Year study begins to address that fundamental question and leads to the next investigational study to determine the relative contributions of tau and amyloid pathology to neuronal dysfunction. In the United States, the Centers for Medicare and Medicaid Services are funding amyloid PET studies to demonstrate PET’s potential clinical value. The Image of the Year study adds a new dimension to the role of PET in aiding the diagnosis and treatment of patients with dementia.  It is a very exciting time for the field of molecular imaging.”

Further investigation of these and other factors of neurodegeneration in living dementia patients could one day help clinicians improve diagnostic accuracy and lead to disease-modifying therapies for Alzheimer’s, including new drugs that could potentially target tau in order to slow or stop degenerative effects in the brain. Multimodal imaging approaches like this one could allow more precise staging of neuropathology, even before the irrevocable onset of memory loss experienced by Alzheimer’s patients. Furthermore, improved prediction, prognosis and therapy control/follow up may become feasible.

More than 46 million people are currently living with Alzheimer’s across the world, and that number is expected to rise steeply to 131.5 million by 2050. The global economic cost of the disease is expected to approach $1 trillion in the same period, according to the newest data from Alzheimer’s Disease International.