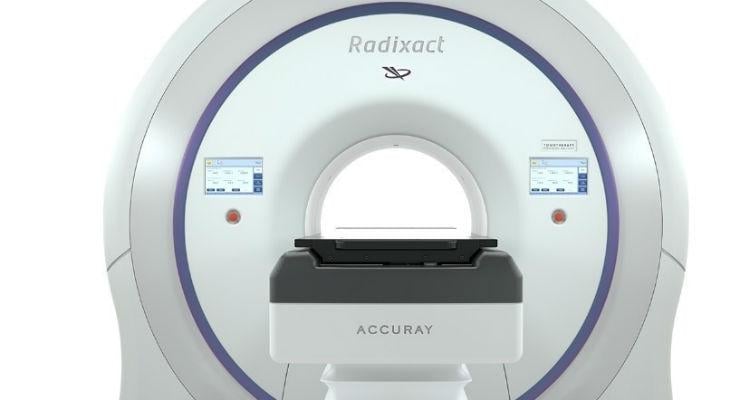 While radiation therapy as a discipline is well into maturity, new technology advances continue to drive the field forward. The following is a roundup of some of the most significant products to launch or be introduced in the last 12 months.

Image-guided radiation therapy (IGRT) offers a more precise and accurate form of treatment than standard photon radiotherapy, incorporating imaging during treatment delivery to more closely assess tumor response. One imaging modality in particular that has shown promise in this application is magnetic resonance imaging (MRI) for its ability to provide real-time anatomical and functional information without giving added radiation dose to the patient.

Viewray was the first to market with a commercial MRI-guided radiotherapy system in the U.S., earning U.S. Food and Drug Administration (FDA) approval for the MRIdian system in 2012. In February of this year, Viewray earned FDA approval for new soft tissue visualization capabilities on MRIdian, including:

Elekta became the second entrant to the market in late 2018 following FDA clearance of its Elekta Unity MR-Linac. Created through a partnership with Philips Healthcare, the system employs a 1.5 Tesla (T) magnet for imaging modeled on the Philips Ingenia MRI but has been modified for radiotherapy applications. (Viewray’s MRIdian uses a 0.3T magnet.) With the real-time imaging capabilities of Unity, users can see if the target area moves out of the treatment beam and can pause or adjust therapy accordingly.

Canadian startup MagnetTx Oncology Solutions is looking to become the third vendor in the MR-linac market with its Aurora-RT system that is pending FDA 510(k) clearance. The prototype was developed at the University of Alberta Cross Cancer Institute in 2008, and the first human-size unit was installed in Canada in 2014. Aurora-RT features a 110 cm bore — larger than most MR-linacs in development, according to the company — allowing patient and table to be moved so the tumor remains in isocenter. Other features include a 120-leaf MLC and a 0.5T cryogen-free MR system that requires no helium venting.

Reflexion Medical introduced a different approach to IGRT that it calls biology-guided therapy at the American Society of Radiation Oncology (ASTRO) 2018 annual meeting. The system they displayed combines a linear accelerator and a positron emission tomography/computed tomography (PET/CT) scanner into a single gantry. Instead of tracking tumors with live MRI, the system uses the PET signals of the tumor itself to triangulate its position in the body. The onboard 16-slice fan beam CT creates images in less than 30 seconds with very fast spin. The company says this could eliminate the need for fiducial markers and respiratory gating, which would also reduce the margins necessary to ensure healthy tissue is spared from additional toxicity.

Respiratory gating is a common practice in radiation oncology to account for the motion associated with breathing and other bodily processes that might disrupt treatment plans. At the 2018 annual meeting of the American Association of Physicists in Medicine (AAPM), C-Rad showed a new iteration of its motion tracking system designed for respiratory gating. cBreath employs three cameras that work in tandem with a CT scan to help triangulate the patient and show positioning. The system produces a color-coded image to help align the patient with the reference CT — red means that part of the patient is too high, yellow indicates they’re too low, green indicates a reference surface and blue reflects the live surface of the patient on the table. The cBreath technology uses visible light, so there is no additional dose to the patient.

Civco introduced a new patient immobilizer for the head and neck at AAPM 2018. The Solstice device allows the head and neck to be tilted in different positions to better match the treatment plan during stereotactic radiosurgery (SRS) and stereotactic body radiation therapy (SBRT). The device received FDA clearance in October 2018.

Several companies in the last 12 months have introduced 3-D printing capabilities to enhance the delivery of radiation therapy. Civco and Dot Decimal now offer the ability to 3-D print boluses for radiation therapy systems to modify the dose delivered to the patient. The technologies take a patient’s CT scan and use it to generate the bolus design, which can then be produced in the 3-D printer.