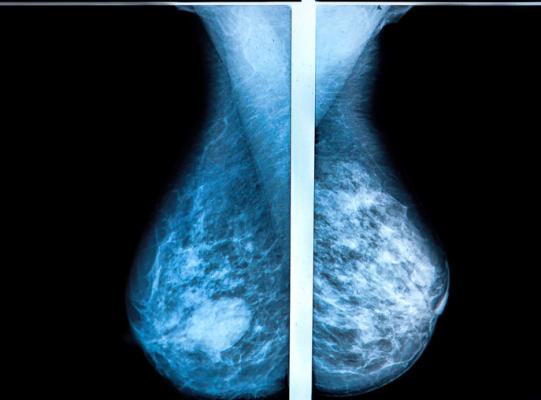 July 15, 2021 —  For any type of diagnostic test, technology that helps improve the reliability of test results is a welcome addition to a doctor’s arsenal.

So it was with the introduction of three-dimensional tomosynthesis mammography, which allows radiologists and oncologists to see deeper into breast tissues by taking multiple images and allowing specialists to interpret each layer almost as if they were reading a book.

The technology promised greater efficiency at cancer detection and fewer callbacks on patients for whom the interpretation of results was unclear or uncertain.

A recent study by researchers at The University of New Mexico Comprehensive Cancer Center shows that for New Mexican women, at the very least, half of that is true.

The study did two things. First, researchers combed through more than 35,000 mammograms conducted at UNM Health clinics between 2013 and 2016 and evaluated the frequency with which patients were called back following an initial screening and the numbers of cancers detected by 3D mammography.

The second portion of the study reached out to more than 1,000 women considered at risk to examine their awareness of 3D mammography and what factors were likely to motivate them to pursue the new diagnostic tool.

“I think in this study we added to the national conversation about why 3D is superior and in what ways it can benefit our specific populations,” said Stephanie Fine, M.D., a surgical oncologist with the UNM Comprehensive Cancer Center, who led the study.

Fine said the review of the mammography records over the three-year period suggested that women who had 3D breast examinations saw, on average, a 30 percent reduction in the number of callbacks over women who used traditional two-dimensional examinations.

Fine said that the team noticed that recall rates for traditional screenings actually went up over the course of the years her team studied the records.

“In the last year, it was up to 14 percent as the others went down or stayed the same,” she said.

It is possible that as 3D mammography increased in popularity, radiologists became more comfortable with having a 3D component to the screening to the point that they were less certain of mammograms without them, Fine said.

What Fine’s team didn’t see in the records also was surprising.

“One of the things we thought we would see but we didn’t was a change in cancer detection rates,” she said.

Fine said the number of cancers detected per 1,000 women didn’t substantially change between 3D and more traditional forms of mammography.

“We don’t know why that is,” she said. “Is it because we were in this transition period? Do women in New Mexico have a higher average breast density? The people we captured during those years may have other variables we didn’t uncover.”

Fine said the team was unable to drill down far enough into the data to examine the types of subsets that might lend answers.

Interviews with the 1,000 at-risk patients also led to some interesting conclusions, Fine said. Even in the early days of 3D mammography, most women interviewed had at least heard about the technology. The women may not have heard more than it was considered a superior choice for mammography, but the awareness was there, she said.

“Another interesting finding was that if their primary care provider strongly urged they have a 3D component to their mammogram, that heavily tipped the burden with the patient that she was going to find the resources to make that happen,” Fine said. “It’s a message we hoped to get out that the recommendations of a primary care physician are considered by the patient and they do take that into account.”

Fine said the study was important in that it confirmed the usefulness of 3D mammography at a time when the technology was still emerging. Now, state Medicaid plans cover 3D screenings for women, making it more widely available to New Mexicans and hopefully lowering the number of women who must go through the uncertainty of a recall.

“Even though we didn’t find the increase in cancer detection rates, the recall aspect is really important,” Fine said. “We were able to confirm that that this does work for our community and it does make a difference. That was in the early stages and it might be fun to open that chapter up again and look at more current rates and how it compares to historic controls.”