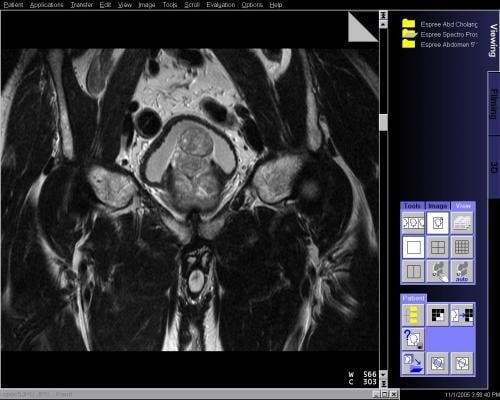 October 6, 2016 — High-dose stereotactic body radiotherapy (SBRT) for men newly diagnosed with low- or intermediate-risk prostate cancer results in shorter treatment times, low severe toxicity and excellent cancer control rates, according to new research. The findings were presented at the 58th Annual Meeting of the American Society for Radiation Oncology (ASTRO), Sept. 25-28 in Boston. The study is the first large, multi- institutional study of SBRT in prostate cancer with long-term follow-up.

Although prostate tumors generally respond well to radiation therapy (RT), the possibility of radiation exposure to healthy tissue in the genitourinary (GU) and gastrointestinal (GI) systems can be of concern. SBRT is an advanced technique that precisely targets high doses of RT to the tumor in a small number fractions, simultaneously avoiding surrounding tissue and reducing toxicity to non-cancerous cells. The technique has become the standard of care for many non-surgical lung cancer patients, as it limits exposure to the heart and surrounding lungs. When treating tumors in the prostate, SBRT avoids the adjacent bladder, sex organs and rectum.

“Single-institution studies on the use of SBRT as the primary treatment for prostate cancer have illuminated the treatment as a cost-effective and faster alternative to IMRT [intensity modulated radiation therapy],” said Robert Meier, M.D., lead author of the study and a radiation oncologist at Swedish Medical Center in Seattle. “Our study is the first to contribute multi-center data that support the use of SBRT as front-line therapy for men with prostate cancer.”

A total of 309 men with newly diagnosed prostate cancer were enrolled in the trial at 21 community, regional and academic hospitals across the United States. Eligible patients had either low-risk disease (CS T1-T2a, Gleason 6, PSA < 10) (n = 172) or intermediate-risk disease (CS T1c-T2b with either Gleason 7 and PSA < 10, or Gleason 6 and PSA 10-20). All of the men received SBRT via a non-isocentric robotic platform, with an RT dose to the prostate of 40 Gy administered in five treatment sessions of 8 Gy each. Intermediate-risk patients received a dose of 36.25 Gy to the seminal vesicles. Concurrent and adjuvant androgen ablation therapy were prohibited among study participants.

“Our results illustrate how advanced technology has radically improved our ability to target cancer,” said Meier. “After following patients for more than five years, we found that serious side effects from a brief course of SBRT were uncommon and that cancer control rates were very favorable compared to historical data. Our trial confirms that SBRT may be preferable to other treatment approaches for newly-diagnosed cases of prostate cancer, including more aggressive disease.”