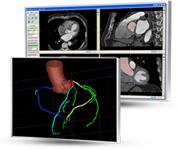 Triage of suspected CAD patients represents a major clinical and healthcare economic challenge in the United States. An estimated six million patients enter the emergency room in the United States each year with chest pain. Because current diagnostic techniques are often equivocal, an estimated two million, primarily low risk patients, are admitted to the hospital for further testing at an annual cost of $10-$13 billion. In an estimated 85 percent of these patients, an acute coronary event is subsequently ruled out.

In these studies, the COR Analyzer demonstrated high negative predictive values, exceeding 97 percent in four, meaning that more than 97 percent of patients determined by the COR Analyzer System to not have significant stenosis were in agreement with a “gold standard” comparator. The COR Analyzer software interprets CTA images in real time, with no human interaction to provide an immediate indication of whether a patient has significant (50 percent or more) stenosis.

“Results suggest that [the COR Analyzer] can be used in clinical practice to facilitate the accurate detection and exclusion of CAD on 64-slice and over CT scanners,” said Michael Poon, M.D., director, advanced cardiac imaging, department of radiology, Stony Brook Medical Center. The COR Analyzer results “do not replace the expert analysis by the interpreting cardiologist, but rather work synergistically by combining the cardiologist's expertise with the software's capability,” he said.

Researchers at the Medical University of South Carolina compared evaluations of five observers with varying levels of experience. The COR Analyzer “improves reader performance for diagnosing coronary artery stenosis, especially for inexperienced readers at the per patient level,” said Joseph Schoepf, M.D., professor of radiology and cardiology and director of cardiovascular imaging at the university.

In the study, the readers of different experience levels evaluated CTA studies in 50 patients and then re-evaluated the studies three months later with the COR Analyzer. The analyses were compared with quantitative catheter angiography. Inexperienced readers’ initial interpretations averaged 86 percent on a per-patient basis and improved to 100 percent with the COR Analyzer. For intermediate and expert readers, the sensitivity remained at 93 percent and 96 percent, respectively.