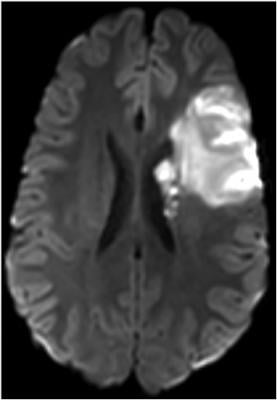 March 16, 2016 ― A team of researchers led by the University of Missouri School of Medicine has developed a new, real-time method of imaging molecular events after ischemic strokes ― a finding that may lead to improved care for patients.

According to the American Heart Association, ischemic strokes account for nearly 90 percent of all strokes. They occur when a blocked artery prevents blood from getting to the brain and usually result in long-term disability or death.

“During an ischemic stroke, harmful enzymes called gelatinase become overactive in areas of the brain where blood flow is cut off,” said Zezong Gu, Ph.D., an associate professor of pathology and anatomical sciences at the MU School of Medicine and lead author of the study. “Over-activation of these enzymes causes brain damage. Our team hypothesized that if we could visualize and track this activity in real-time, we could then work on developing a way to block the activity and prevent brain damage from occurring.”

Magnetic resonance imaging (MRI) is commonly used to diagnose strokes because it produces precise, sectional images of the brain. Although these images can verify the region of arterial blockages within the brain, current contrast agents are not specific or sensitive enough to reveal important molecular events, such as gelatinase activity, on an MRI image.

To overcome this obstacle, the researchers used peptides that specifically recognize gelatinase activity. The peptides were tagged with contrast agents through a process developed by research team member Roger Tsien, Ph.D., a biochemist and Nobel Laureate at the University of California, San Diego.

“Once the tagged peptides traveled to the site of increased gelatinase activity, they were absorbed into the cells with this activated enzyme,” Gu said. “When enough of these peptides were absorbed, the stroke site was visible on an MRI. We tested this technique in both cell-based and mouse models of ischemic stroke. Using this method, we successfully tracked gelatinase activity.”

Gu suggests that real-time imaging of this activity could lead to a better understanding of how to treat strokes and mediate the damage they cause.

“Our findings indicate that tagged peptides can be used as a non-invasive probe to detect and track gelatinase activity,” Gu said. “This process may serve as an additional tool for clinicians to treat their patients if a viable inhibitor can be developed to prevent the damage caused by this activity.”

Gu and his team currently are working to develop such a gelatinase inhibitor.

The study, “Gelatinase Activity Imaged by Activatable Cell-penetrating Peptides in Cell-based and In Vivo Models of Stroke,” recently was published in the Journal of Cerebral Blood Flow and Metabolism.

Funding for the study was provided by the National Institutes of Health, the Dana Foundation, American Heart Association National Scientist Development Award (09SDG2260983) and the MU Department Research Fund.