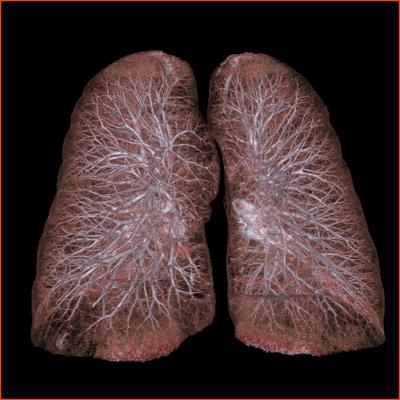 The U.S. Preventive Services Task Force recommends annual screening for lung cancer with low-dose computed tomography (CT) in adults aged 55 to 80 years who have a 30 pack-year smoking history and currently smoke or have quit within the past 15 years.2

"Less frequent screening would reduce radiation exposure but previous studies of longer screening intervals produced varied results," said lead author Mi-Young Kim, M.D., a radiologist at Asan Medical Center, Seoul, Korea. "This may have been caused by differences in the clinical and radiological presentation of lung cancer in women and men."

This study investigated sex differences in newly developed lung cancer and calculated the optimal CT screening intervals for women and men. The study retrospectively included 46,766 patients who underwent chest CT screening at Asan Medical Center between January 2000 and February 2016. During the study period, 282 patients developed lung cancer. Of these, 186 patients were diagnosed from the initial CT scan and were excluded from the study, while 96 patients (85 men, 11 women) were diagnosed from subsequent CT scans and were included in the study.

In the 96 patients, the researchers analyzed the CT screening intervals and the stage and pathology of lung cancer when it was diagnosed, to see if there were any sex differences.

The average time between lung cancer being diagnosed on CT and the previous CT scan was significantly longer in women (5.6 years) than in men (3.6 years). However, the lung cancer stage at diagnosis was higher in men: Eighty-two percent of lung cancers diagnosed in women were stage I compared to just 49 percent in men.

Kim said, "Because ground glass opacity nodule is the most common feature of lung cancer in women and all cases are adenocarcinoma, the growth rate of cancers might be low. Most female patients were non-smokers (82 percent), who have a lower risk of lung cancer, while 87 percent of men were smokers. We included all patients screened for lung cancer in a 17-year period, but the number of women patients was low and further studies are needed to confirm the sex differences we found."

She concluded, "Our study suggests that the annual follow-up interval for CT is too frequent for women, and scans every 2-3 years might be suitable. By reducing the number of unnecessary CT scans, we can decrease radiation exposure and increase cost effectiveness."

Commenting on the significance of the research, Pilar Garrido, M.D., head of the Thoracic Tumour Section of the Medical Oncology Department at Ramón y Cajal University Hospital, Madrid, Spain, said: "Lung cancer is the most common cancer globally, but debate about the optimal screening strategy is ongoing and current selection criteria are based only on age and pack-years. Several studies have highlighted that lung cancer has different features in women compared with men, thereby defining a different entity in female patients."

"Cancer incidence is expected to increase in the future, further straining limited healthcare resources," continued Garrido. "Personalized screening strategies, such as a gender approach, could be a way to optimize results and allocate resources appropriately."

1. Abstract 18PD - 'Optimal screening interval for detection of newly developed lung cancer: Comparison of sexual difference' will be presented by Dr Hyun Jung Koo during the Poster Discussion session 'Epidemiology and innovations in biomarker development' on Saturday, 6 May, 16:45 (CEST).