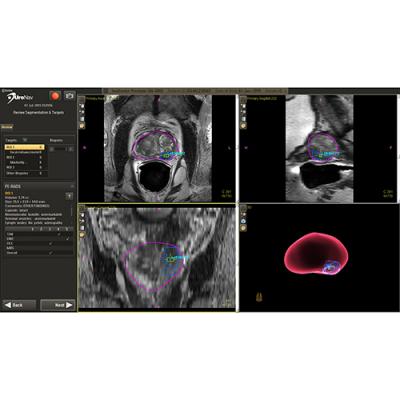 "An MRI is better at seeing tumors in the prostate," said Michael Cher, M.D., professor and chair of urology at Karmanos Cancer Institute and Wayne State University School of Medicine. "MRI images are highly detailed, and our radiologists are experts at finding tumors on the images.  Our urologists are also skilled at performing prostate biopsies using live ultrasound images.

"With this new MRI-ultrasound image fusion system, our urologists are able to biopsy suspicious MRI-detected areas while doing live ultrasound."

Those who are eligible for this technology are men who have elevated prostate-specific antigen (PSA) test results and have never had a prostate biopsy, or men diagnosed with a small amount of cancer who are considering active surveillance. The system also is used to detect tumor progression in men who have been on active surveillance for several years. Cher said these are common scenarios in the Karmanos urology clinic. Demand for the system is increasing rapidly.

Patients typically have an MRI performed first, which takes about an hour. Radiologists then analyze the images and identify suspicious areas using a standardized scoring system. At the time of biopsy, which occurs after the MRI, urologists import the MRI images digitally into the UroNav system where they are fused with the live ultrasound images captured during the biopsy procedure.

Through the use of software, the UroNav machine takes the two images and fuses them together in a three-dimensional fashion. The images move and change in real time as the urologist performs the biopsy procedure.

"Previously, we used ultrasound alone for biopsies," Cher said. "The biopsies were distributed throughout the prostate in a systematic fashion. Now, with the fusion of the MRI and ultrasound images, we perform targeted biopsies of suspicious areas. We are better at finding cancers, and therefore better at determining the best treatment plan for each patient."

Cher mentioned that prostate cancer detection methods have evolved over the years, from digital rectal exams, which were a very poor method of detecting prostate cancer; to the PSA blood test; to ultrasound, which could see the prostate well but wasn't very good at seeing tumors within the prostate.