Is it Time for a Change in How Structural MRI Data is Collected?

New study shows there is a lot to consider 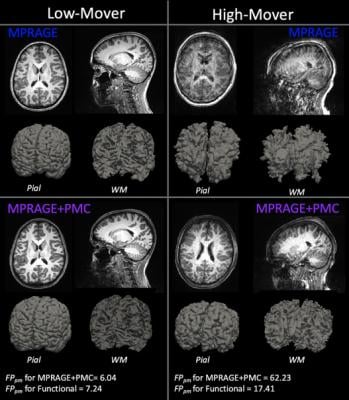 February 17, 2021 — A new paper, "Is it time to switch your T1W sequence? Assessing the impact of prospective motion correction on the reliability and quality of structural imaging," evaluates two different ways of collecting magnetic resonance imaging (MRI) structural images. The first type of sequence, called MPRAGE, has been widely used by the neuroimaging research community for the last 20-plus years. More recently, an updated version of this sequence that includes Prospective Motion Correction (PMC) has been developed. The sequence with PMC adapts the MPRAGE sequence based on participant head motion. That makes it ideal for collecting data on children, who often struggle to hold still during MRIs. However, researchers are reluctant to change MRI sequences, since that typically means that they will not be able to use old and new data together in a statistical analysis.

"That's where this study comes in," said Alexandre Franco, Computational Neuroimaging Laboratories Director at The Nathan S. Kline Institute for Psychiatric Research and a research scientist at the Child Mind Institute. "It directly compares the reliability of the two sequences, MPRAGE and MPRAGE+PMC."

By using data collected for a Healthy Brain Network initiative that performed two MPRAGE and two MPRAGE+PMC sequences within the same imaging session, with one MPRAGE (MPRAGE1) and MPRAGE+PMC (MPRAGE+PMC1) pair at the beginning of the session and another pair (MPRAGE2 and MPRAGE+PMC2) at the end of the session, the new study directly compares two sequences from 348 participants. The study aimed to determine if the morphometric measurements obtained from both protocols are equivalent or if one sequence has a clear advantage over the other, while also comparing them through other quality control measurements. Results show that there is a high inter-sequence reliability between the MPRAGE and MPRAGE+PMC sequences. Results also indicate that the MPRAGE+PMC sequence is robust, but not impervious, to high head motion. "In the end use we suggest that studies targeting hyperkinetic populations use the MPRAGE+PMC sequence, given its higher robustness to head motion and higher reliability scores," said Franco.