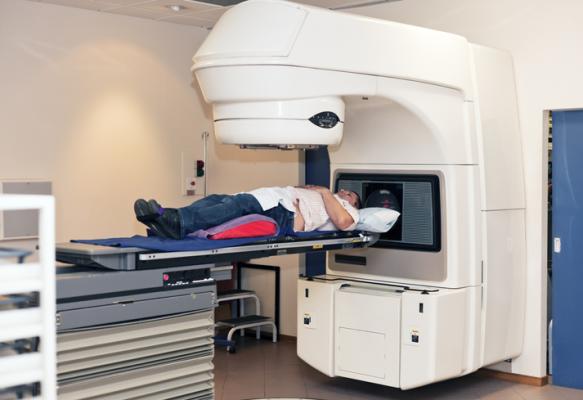 October 28, 2021 — An individual patient data (IPD) meta-analysis of randomized, controlled clinical trials provides strong evidence for the addition of androgen deprivation therapy (ADT) to definitive radiotherapy (RT) for the treatment of prostate cancer, with the projection that adding ADT to the treatment of 10-15 men would prevent the development of distant metastasis in one man. Similarly, if ADT has been added, prolonging the portion of it that follows the radiation (called “adjuvant ADT”) to 18-36 months provides a similar benefit in terms of preventing metastatic disease. The benefits of adding ADT and of prolonging adjuvant ADT were identified regardless of patient age, RT dose (high vs. low), or prostate cancer risk group (high vs. intermediate risk). In contrast, prolongation of ADT that begins before radiation (called “neoadjuvant ADT”) beyond two to three months did not improve any cancer outcome, according to the study, prompting researchers to conclude that the latter treatment should not routinely be employed.

The analysis was conducted thorough the Meta-Analysis of Randomized Trials in Cancer of the Prostate (MARCAP) Consortium, a group formed in 2020 to serve as a data repository from international trial groups. The MARCAP consortium was co-founded by  Amar Kishan, M.D., associate professor and vice chair of clinical and translational research in the department of Radiation Oncology at UCLA and researcher at the UCLA Jonsson Comprehensive Cancer Center, and Dr. Daniel Spratt, the chairman of the Department of Radiation Oncology at University Hospitals Seidman Cancer Center. The MARCAP consortium has data from multiple trials across the world and is the first consortium group of its kind for prostate cancer. Kishan will be presenting the results at ASTRO 2021, the annual meeting of the American Society for Radiation Oncology.

“Individual patient data meta-analyses provide the highest levels of evidence in oncology, allowing us to quantify treatment effects,” said Kishan, chief of the Genitourinary Oncology Service for the Department of Radiation Oncology at the David Geffen School of Medicine at UCLA and the UCLA Jonsson Comprehensive Cancer Center. “The approach has been used to assess therapies in breast cancer and head and neck cancers, but this is the first such effort for prostate cancer.”

According to Spratt, "MARCAP represents the first international collaboration of all radiotherapy clinical trial groups to assess the true impact of the many treatment strategies we have to offer in prostate cancer. The results from MARCAP will be practice-changing and benefit patients around the world."

Prostate cancer is the most common cancer in men other than skin cancer, and it’s the second-leading cause of cancer death in men, according to the American Cancer Society. Each year, about 248,000 new cases are diagnosed, but most men diagnosed with the disease survive.

This analysis was conducted with data from 10,853 patients enrolled in 12 radiation therapy trials to evaluate three aspects of treatment:

The primary objectives of the meta-analyses were to evaluate the impact of these interventions on metastasis-free survival (MFS) and on overall survival (OS).

Additional findings from subgroup analyses: There was no evidence of a treatment effect interaction between RT dose and the benefit of ADT use or adjuvant ADT prolongation. Thus, the benefit of adding either ADT or prolonging adjuvant ADT persists even if high dose radiation is used, and even for patients who have intermediate risk (rather than high risk) disease.

This study is believed to provide the strongest evidence to date supporting use of ADT as well as the prolongation of adjuvant ADT to at least 18 months in in conjunction with definitive radiation therapy for the treatment of localized prostate cancer. The relative benefit of ADT use and adjuvant ADT prolongation was consistent irrespective of radiation dose escalation. In contrast, prolonging neoadjuvant ADT beyond two months did not improve survival outcomes.