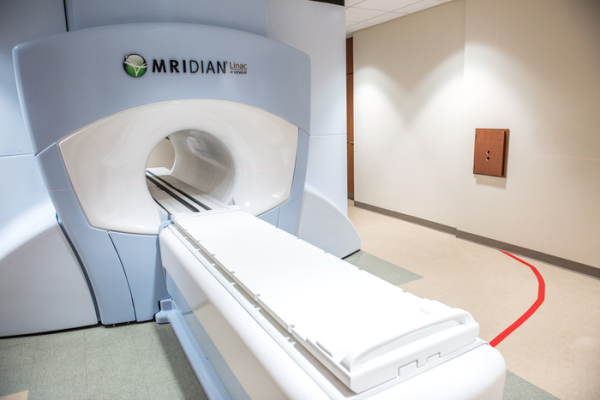 June 3, 2022 — Henry Ford Health is the first in the world to complete a full course of patient treatments using the latest advancement in magnetic resonance (MR)-guided radiation therapy, which integrates real-time magnetic resonance imaging (MRI) and linear acceleration to deliver precise and accurate radiation treatment more rapidly than ever before.

The MRIdian A3i is the latest enhancement to the MRIdian system from ViewRay, Inc., which was the first FDA-cleared and commercially available linear accelerator-based MR-guided radiation therapy system that could image and treat patients simultaneously. In 2017, Henry Ford was first in the world to treat a patient with the MRIdian system, and in 2021, became the first in the United States to have two MRIdian systems when its second was installed in Henry Ford’s new cancer pavilion in Detroit.

“People worldwide travel to Henry Ford Health for advanced cancer treatment,” said Parag Parikh, M.D., Director of MR-guided Radiation and GI Radiation at Henry Ford Health Cancer. “The precision and speed of MRIdian has made expedited treatments possible not only for prostate, breast and lung cancer, but also for traditionally challenging areas such as liver, pancreas, oligometastatic disease and reirradiation, with many of these treatment courses completing in one to two weeks.”

This new technology allows for enhanced radiation beam tracking and only delivers the radiation therapy when the tumor is in the treatment field. This protects the healthy tissue from radiation by automatically stopping the beam when any single target exceeds the clinician-defined boundaries. The new MRIdian A3i features enable Henry Ford clinicians to collaborate simultaneously and connect remotely during patient treatment to make the treatment faster for the patient. MRIdian A3i also expands existing real-time tissue tracking and automated beam gating functionalities to include multiplanar tracking and gating in up to three planes. Henry Ford plans to pioneer brain treatment with MRIdian A3i utilizing the new brain treatment package including the dedicated brain coil and integrated immobilization system.

"Henry Ford Health has been a leader in the field of MR-guided radiation therapy, not only for their clinical firsts but also for their leadership in training and innovative research," said Scott Drake, President and CEO, ViewRay. "As the first center to treat patients with MRIdian A3i, Henry Ford Health continues to take MR-guided radiation therapy to the next level. We look forward to Henry Ford’s continued leadership and expanding the use of MRIdian A3i to brain treatment."

Henry Ford’s MRIdian systems account for two of 50 MRIdian systems worldwide. The systems are used to treat a wide variety of solid tumors and are the focus of numerous ongoing research efforts. MRIdian has been the subject of hundreds of peer-reviewed publications, scientific meeting abstracts and presentations.

Henry Ford Health Cancer is one of the largest cancer programs in Michigan, providing care at five hospitals, 11 outpatient facilities and hundreds of aligned doctor's offices throughout southeast and southcentral Michigan. Cancer experts at Henry Ford communicate seamlessly across the organization’s multiple cancer treatment locations, offering patients access to the most advanced treatment options and expertise, close to home. Treatment for the most complex or rare cancers and Henry Ford’s extensive cancer research program is anchored at its Detroit location.