October 15, 2014 — Medical imaging is at the forefront of diagnostics today, with imaging techniques like magnetic resonance imaging (MRI), computerized tomography (CT), scanning and nuclear magnetic resonance (NMR) increasing steeply over the last two decades. However, persisting problems of image resolution and quality still limit these techniques because of the nature of living tissue. A solution is hyperpolarization, which involves injecting the patient with substances that can increase imaging quality by following the distribution and fate of specific molecules in the body but that can be harmful or potentially toxic to the patient. A team of scientists from EPFL, CNRS, ENS and CPE Lyon and ETH Zürich has developed a new generation of hyperpolarization agents that can be used to dramatically enhance the signal intensity of imaged body tissues without presenting any danger to the patient. Their work is published in Proceedings of the National Academy of Sciences (PNAS).

The team of scientists coordinated by Lyndon Emsley – who is currently professor at EPFL and ENS Lyon – has developed a new generation of hyperpolarizing agents that are both effective and safe for the patient. The substances, called HYPSOs, were developed by the teams of Christophe Copéret at ETH Zurich and Chloé Thieuleux at CPE-Lyon. The HYPSOs come in the form of a fine, white, porous powder that contains the "tracking" molecules to be hyperpolarized. The HYPSO powder is made up of mesoporous silica (silicon dioxide), which is the major component of sand and is commonly used in nanotechnology.

The silica powder used for the HYPSOs consists of particles containing pore channels. It has been designed in such a way that the surface of each pore channel can be evenly covered with molecules known as 'organic radicals'. The radicals are homogeneously distributed, and are able to induce polarization around them. "Controlling the radical distribution was a 'tour de force' never achieved in the past, which made the HYPSO materials ideal for this application," says Copéret. The pore channels are then filled with a solution of the "tracking" molecules to be hyperpolarized, which act as markers for the imaging – e.g. pyruvate, which is important in the production of energy in cells.

Using novel instruments and methods developed by Sami Jannin at EPFL, the HYPSO sample is hyperpolarized with microwaves in a magnetic field at a very low temperature. The magnetic moments of the atoms are forced to align through a process called "dynamic nuclear polarization," which transfers the spin energy of the free radicals' electrons to the markers' nuclei. The electronic spin magnetism of the hyperpolarizing agent acts on the marker molecule, aligning, or "polarizing", the nuclei of its atoms.

Hot water is then used to melt and flush the substrate out of the powder. Because of the equipment and conditions needed, the process generally takes place in a room adjacent to the imaging facility. The substrate is then ready to be injected through a long tube into the patient inside the medical imaging device. The entire process only lasts about ten seconds.

Two scans are performed, one with and one without the hyperpolarized agent. When the two images are compared, it is possible to observe the distribution of the hyperpolarized marker in the patient's body, which, depending on the medical context, can be indicative of disease. For example, accumulation of pyruvate in the prostate could be an early indication of prostate cancer.

The researchers have tested the efficiency of the HYPSOs method on several imaging markers, including pyruvate, acetate, fumarate, pure water and a simple peptide. Because the HYPSOs is physically retained during dissolution, the technique yields pure solutions of hyperpolarized markers, free of any contaminant. The protocol is therefore simpler and potentially safer for the patient, while its dramatic efficiency on signal quality forecasts the use of this new generation of hyperpolarized agents with a broad range of molecules.

As Jannin points out: "We have now received queries of scientists from abroad who are eager to boost their research with this new technology. Amongst other plans, we are very excited about testing these materials in vivo.” 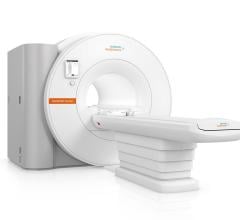 Noveember 11, 2021 — Siemens Healthineers and UC San Francisco have formed a research and innovation-driven ...