With offices in Genoa and Florence, the Group now employs 1,250 people worldwide, 20% of whom are focused on research and development 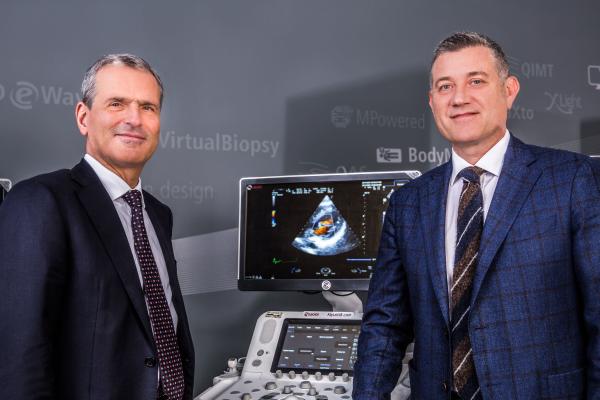 April 12, 2022 — Esaote S.p.A., a leading biomedical company in the diagnostic imaging sector – especially in the fields of ultrasound, magnetic resonance and information technology for healthcare – is celebrating 40 years in business with an international event.

Founded from scratch in 1982, the Italian company – with its headquarters in Genoa, an office in Florence, and a current presence in 100 countries around the world – immediately carved out a leading role in the global market, focusing on innovation, research and technology and contributing to the market’s renewal.  The ultrasound system used by NASA for the cardiovascular examinations of astronauts on the Space Shuttle was made by Esaote. The first MRI system specifically for the limbs was developed by Esaote, as was fusion imaging technology.

A story of growth and success made possible by the ingenuity and work of numerous people, who have believed in the challenge and in the collaboration developed from the outset with the medical and scientific world, research centers, universities, and institutions.

Three days of celebration, from today to April 14th, 2022, with over 750 honored guests in Genoa – employees, technological and commercial partners, doctors, opinion leaders and institutions – retracing Esaote’s history with a clear eye on the future and the upcoming challenges that await.

The packed schedule begins today, Tuesday April 12th, 2022, at 5.30 pm in the magnificent setting of the Teatro Carlo Felice, with the institutional event "Imaging the Future, Every Day. Forty years of innovation in healthcare since 1982”. The show will be filled with evocative, artistic and institutional moments, and testimonials, looking at the three values that have always formed the basis of Esaote’s history and success: people, technology, and innovation.

Artistic and institutional contributions will alternate on stage, to illustrate and interpret Esaote’s history and vision, directed by Ilaria D'Amico and with opening remarks by the CEO of Esaote, Franco Fontana.

The major Italian, Ligurian and Tuscan institutions will also be in attendance. The guests will include the Undersecretary at the Ministry of Health Andrea Costa, the Mayor of Genoa Marco Bucci, Councilor for Economic Development of Liguria Andrea Bendveduti, the President of Florence City Council Luca Milani, and the President of the Regional Council of Tuscany Antonio Mazzeo.

There will be plenty of room for contributions from the company's founders and those who made it great – including Carlo Castellano, Fabrizio Landi, and Andrea Oberti – and from its major players today, especially the people whose everyday work focuses on research and development of new technologies.

The three key themes at Esaote will also be told in performance, in inspirational monologues by Neri Marcorè, music from Dado Moroni’s jazz trio and theatrical audiovisual content.

The celebrations will continue for the next two days in the Old Port of Genoa: over 400 doctors, opinion leaders, business partners, and employees will be taking part in the Scientific Symposium “Shaping the future: clinical developments” (Wednesday 13th from 9.30 am to 1 pm), followed by the Esaote Global Sales & Marketing Meeting (Wednesday 13th from 2 pm and Thursday April 14th from 9 am to 1 pm). The marketing and sales force from 100 countries around the world will be coming together in Genoa, to talk about research and trace Esaote’s marketing and product development strategies.