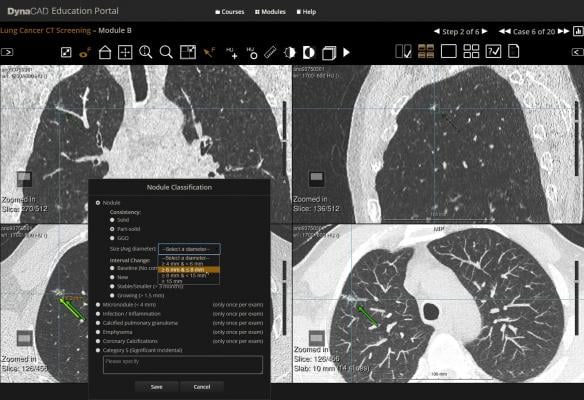 August 15, 2018 — Although national guidelines advise doctors to discuss the benefits and harms of lung cancer screening with high-risk patients, those conversations are not happening the way they should be, according to a new study.

Lung cancer screening is recommended for high-risk current and former smokers, but because of the potential harms of screening — including a high rate of false positives and other factors — the U.S. Preventive Services Task Force (USPSTF) and other organizations advise physicians and patients to discuss the potential risks and benefits of screening. Researchers from the University of North Carolina (UNC) Lineberger Comprehensive Cancer Center report in JAMA Internal Medicine1 that their analysis of 14 audio-recorded office visit discussions between doctors and patients found the quality of the conversation about lung cancer screening was “poor” and discussion of the potential harms of screening was “virtually nonexistent.” In addition, the doctors spent less than a minute, on average, discussing the issue.

“We’re not taking a side as to whether lung cancer screening is good or bad, but there seems to be a consensus that we should be sharing these complex decisions with patients,” said UNC Lineberger’s Daniel Reuland, M.D., MPH, director of UNC Lineberger’s Carolina Cancer Screening Initiative and the study’s senior author. “Our fly-on-the-wall sample from real-world practice shows us that’s not happening.”

Lung cancer is the leading cause of cancer death in the United States. The American Cancer Society estimates that more than 234,000 people will be diagnosed with lung cancer in the country this year and the disease will cause more than 154,000 deaths. The National Lung Screening Trial  (NLST) found that detecting lung cancer in its earliest stages can reduce a person’s risk of dying from the disease.

Since 2013, the USPSTF has recommended annual lung cancer screening using low-dose computed tomography (CT) in adults aged 55 to 80 years who have smoked a minimum of 30 pack-years, which amounts to 20 cigarettes per day each year for 30 years, and who are still smoking or have only quit in the last 15 years.

The NLST showed that with lung cancer screening using low-dose spiral CT scan, there were about 20 percent fewer lung cancer deaths among people at very high risk from the disease compared with screening with chest X-ray. However, the trial also identified potential harms of screening, including false positive findings. More than 95 percent of lung nodules found on screening CT scans are not cancer. Because of this, many patients with abnormal results will need follow-up procedures that can be invasive, and ultimately do not find cancer. The trial also showed that screening leads to the diagnosis of cancers that, left untreated, would not have affected the patient during his or her lifetime – a phenomenon known as over diagnosis, according to a study published in JAMA Internal Medicine, led by Edward F. Patz Jr, M.D.2

“A lot of people undergo surveillance, additional scanning, and some people undergo invasive procedures who don’t have lung cancer,” said Reuland, who is also a professor at the UNC School of Medicine in the Division of General Medicine and Clinical Epidemiology. “The problem is weighing a small chance of benefit in the form of prolonged life versus a larger chance that a given patient will incur some kind of physical or psychological harm, plus out-of-pocket costs. It’s important to talk about those potential harms and benefits with patients when deciding about screening.”

These discussions are recommended and, in some cases, required by national guidelines. Before it will pay for a screening procedure, the U.S. Centers for Medicare and Medicaid Services (CMS) requires a doctor-patient discussion about the benefits and harms, issues of over-diagnosis, the false-positive rate and risk of total radiation exposure from the test. The USPSTF advises the decision to screen should be made after a “thorough discussion of the possible benefits, limitations and the known and uncertain harms.”

To see if discussions were happening, Reuland and his colleagues analyzed transcripts of 14 screening discussions they identified in a large database of conversations between doctors and patients provided by the private company Verilogue. The conversations were found by electronically searching 5,300 recorded interactions between physicians and age-eligible patients. Of 137 conversations that met keyword criteria, only 14 specifically addressed lung cancer screening. The researchers found that the conversations were brief and one-sided, and none of the doctors mentioned the potential harms of screening. No doctor explained false-positive test results or the possible need for additional imaging or invasive diagnostic procedures.

“Although the sample was small, the results were stark and confirmed what we thought we would find,” Reuland said. “Shared decision making isn’t happening in practice as well as it should or as well as we’d like to think it is. There’s a big gap between what guidelines say and what actually happens.”

Reuland said better systems and infrastructure are needed to ensure these conversations happen the way they should.

“We need to design systems that make patient care and medical decisions more informed and shared, and we need to take that responsibility seriously,” he said. “Issuing guidelines and payer-based regulations saying we should be doing shared decision-making is fine, but it isn’t enough. Among other things, we need more efficient and reliable ways of getting patients involved in these decisions.

Finding better ways of having clinical support staff help with the delivery of patient education, particularly using educational tools known as decision aids, will be important,” Reuland added. “Patient support for making complex decisions probably shouldn’t rely only on doctors with limited time for each patient visit and a lengthy visit agenda.”