Patients who undergo operation within 12 weeks of diagnosis fare better 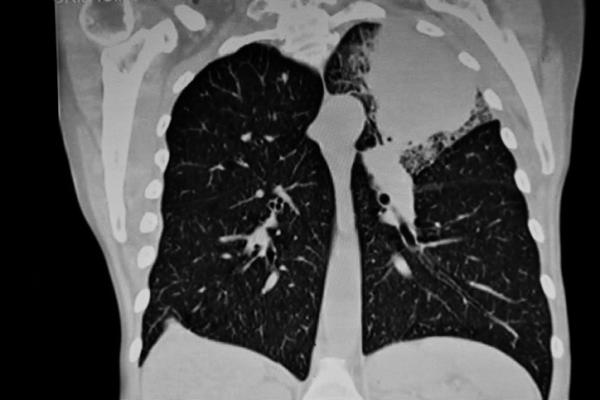 June 1, 2021 — Swiftness is essential when treating lung cancer, the second most common type of cancer in the U.S. and the country's leading cause of cancer deaths. For patients with early-stage non-small cell lung cancer, surgical removal of a tumor-infested lung or of a smaller lung section may be the only treatment needed.

However, some patients postpone surgery while seeking second opinions, because of economic or social factors, or for personal reasons such as waiting until after a child's wedding or a planned vacation. Worries about contracting COVID-19 in a clinical setting also have led to delays.

But a new study by researchers at Washington University School of Medicine in St. Louis found that delaying lung cancer surgery for more than 12 weeks from the date of diagnosis with a CT scan is associated with a higher risk of recurrence and death.

The findings are published May 27 in JAMA Network Open.

"Patients with early-stage cancer have the best chance for survival," said the study's senior author, Varun Puri, M.D., a thoracic surgeon and professor of surgery. "That's why it's critical for patients to promptly seek treatment within 12 weeks after they've been diagnosed."

Non-small cell lung cancer comprises 84% of all lung cancer cases, according to the American Cancer Society, and the overall five-year survival rate is 25%.

"Our data provide particularly timely information regarding delayed medical care, a common issue during the ongoing global pandemic," said Puri, also a research member of Siteman Cancer Center at Washington University School of Medicine and Barnes-Jewish Hospital. "Physicians and patients want to know more about the safety of delaying surgery. The risks have been poorly understood because previous studies have used imprecise definitions for the date of cancer diagnosis. The goal of our study was to provide more uniform data, which we did by tracking patients from most recent CT scan diagnosis to day of surgery."

Shortly after the World Health Organization declared a pandemic in March 2020, medical groups such as the American College of Surgeons, the Society of Thoracic Surgery, and the American Association for Thoracic Surgery advocated postponing elective procedures and, in some cases, necessary but nonemergency surgeries.

Generally, the organizations recommended patients proceed with lung cancer surgeries. Barnes-Jewish Hospital, where Puri treats patients, followed those guidelines. "However, pandemic fears and conflicting research about delaying surgery made it difficult to counsel patients about treatment options," Puri said. "Even in nonpandemic periods, the wide range of estimates about when to delay treatment can be confusing.

"Patients need to know that COVID-19 transmission rates have been low in hospitals, particularly with screenings and mandatory protocols," he added. "As long as those are followed, hospitals are perfectly safe."

For the study, the researchers analyzed de-identified medical records in a database maintained by the U.S. Veterans Health Administration, the nation's largest integrated health-care delivery system. The researchers examined information involving 9,904 patients with stage 1 non-small cell lung cancer who underwent surgery from October 2006 through September 2016. The average age of the predominantly male patients was 67.

"While the patient demographics may not be uniformly comparable to the overall U.S. population, the general patterns of lung cancer care and health outcomes are similar between veterans and nonveterans," said the study's first author, Brendan Heiden, MD, a surgical resident and research fellow at Washington University. "This means our findings are very likely to be relevant for the broad population of early-stage lung cancer patients."

Researchers aimed to establish a standard method to quantify surgical delay and to examine its association with oncologic outcomes. They defined the time to surgery as the period between the patient's most recent CT scan -- considered the most reliable diagnostic tool for lung cancers -- and surgery.

Among the patients, the majority (70%) underwent surgical treatment within the 12-week time frame, with about 30% of patients experiencing delays. On average, patients who received surgery within the 12-week span lived 7.5 months longer than those who did not -- 76.1 months compared with 68.6 months.

Researchers detected recurrence in 4,158 (42%) patients during the study's follow-up period six years after surgery. Recurrence was more likely to occur in patients who had postponed surgery. In addition, for each week of delay, the risk of recurrence increased, although modestly, the researchers said.

The researchers also noted that the data indicated surgical delays were more likely in Black patients than in white patients. They plan to continue research into racial disparities and other aspects of surgical delays.