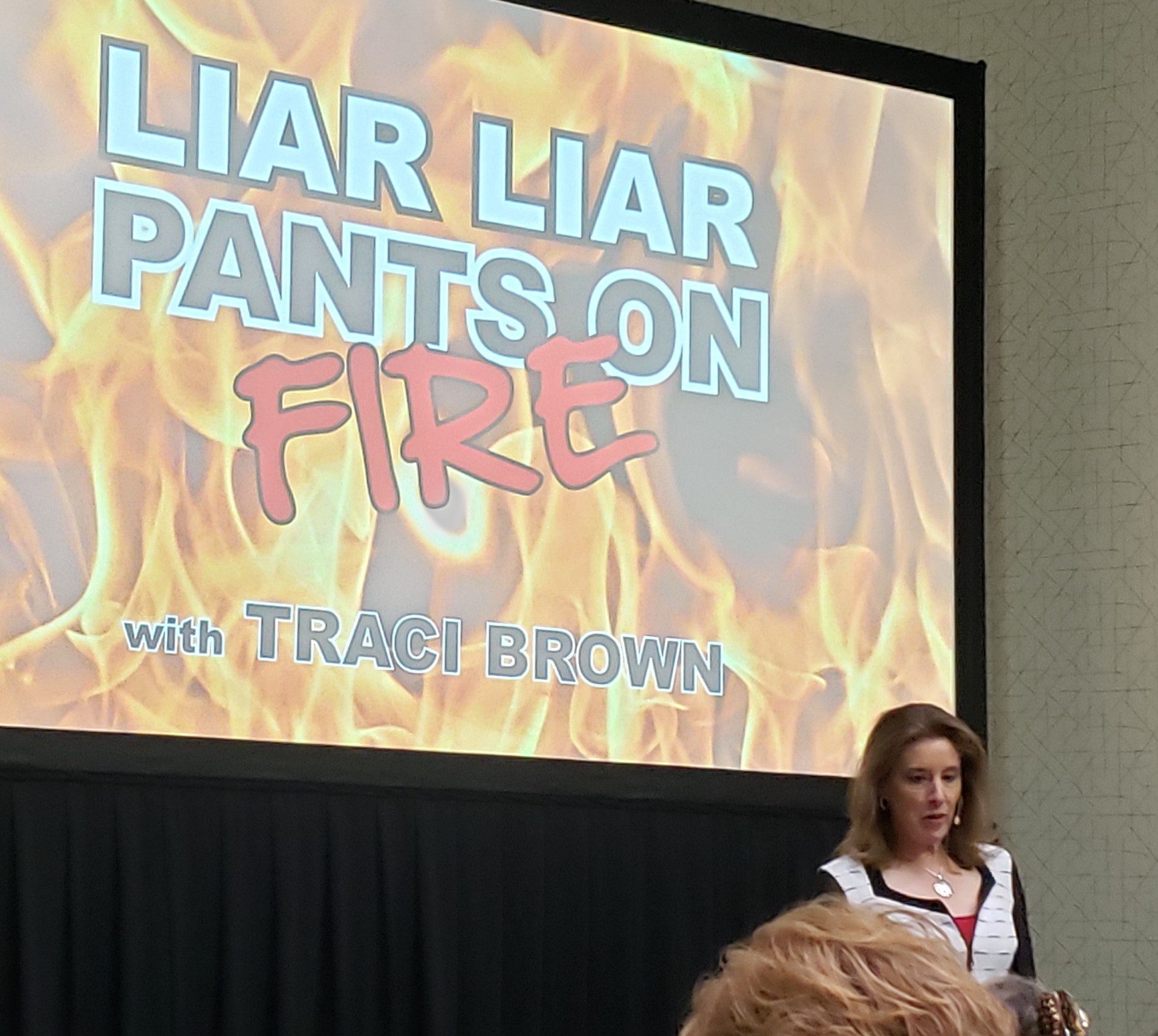 Body language expert Traci Brown spoke at the AHRA 2019 meeting on how to identify when a person is not being honest by their body language. She said medical imaging department administrators can use this knowledge to help in hiring decisions and managing staff.

Can you tell when someone is lying? Body language expert Traci Brown can.  She explained how in a session July 21 at the Association for Medical Imaging Management (AHRA) 2019 meeting.

People who cannot distinguish lies from truths are in for a lot of pain. “What’s the pain in your business — a lot of hassles and not getting as much money in the door or more going out the door,” she told attendees of her AHRA session entitled “Liar, Liar Pants on Fire.” “People’s pants are on fire all the time around you — and that costs you time, money and energy.”

Brown illustrated that point with stories of techs who said they were not the ones who dropped (and broke) the X-ray detector.  Or who took several days off to attend the funeral of their fathers (who had died previously that year.)

During her talk, she led attendees in the game of “Two Truths and a Lie,” a game she played with her radiology director Bruce for fun. “People play this game every day but probably don’t realize they are playing it,” she said.  Winning “with your team potential hires and vendors” can dramatically improve the bottom line of your institution, Brown said.

Brown asked, can you trust your team? And what about your new hires? Have they inflated their resumes? Are they really who they say they are?  There is a way to find out.

“Maybe (right now) you just have a hunch they are up to something,” she told the audience at AHRA 2019.  “But there are signs behind the hunches that will let you can find the liars in your lives.”

Never Fall Again
During the session, Brown explained how to separate lies from truths “so you’ll never be deceived again.” She described the importance of paying attention to “baselines” — the body language that people project when they are telling the truth.  Paying attention to those baselines can be used to later reveal the telltale signs of lying. “Pay attention — or you pay with pain,” she said.

These signs can be seen in the lies of criminals and politicians, some of whom are both, she said.  Head bobbing to the opposite of what was being said was one indicator of lying, a sign obvious in video clips she showed of a former president nodding yes, while denying having sex with an intern; a TV bachelor vigorously shaking his head “no” while verbally answering that he was indeed ready to make a commitment.

Other signs of deceit showed up in a clip of Patriot football team quarterback Tom Brady smiling through answers about deflategate. In other clips of Lance Armstrong, it showed him first denying wrongdoings in one then admitting them in the next.

The voice may lie, she said, but the body cannot.

Brown credited Armstrong, against whom she said she raced bicycles competitively, with leading her to start analyzing body language.  A drop of the shoulder or straightening of the back, she said, helped her learn what to expect from the cyclists in front of her.

“I had to use everything I could to even stay close to Lance Armstrong,” she said.  “I was racing right next to one of the biggest frauds in the business.”

Signs, Signs, Everywhere a Sign
“Body language informs the conversation,” Brown said.  “It tells you where to dig — what questions to ask and where to go.”

The bigger the eyes, the better the chance of deceit. She said whites of the eye are a sign of fear. Eyes rapidly shifting up, down and sideways can be a sign of deceit. Sucking or covering the lips may indicate that the person is holding something back or is about to tell a lie. Shifting from side to side while talking — the feet are trying to run away, she said.

Voice tone can also indicate something is up.  Outrage is often a sign of deceit, she said.

Types of Lies
She then listed the different types of lies: fabrication, exaggeration, minimization  and deceptive detail.   Not all lies are spoken, she noted.  People can lie by omission.

Everyone lies, she said.  But rather than getting upset with everyone, focus on the people who tell important lies, she advised “ones that you have a stake in. So if someone says, ‘That tie looks good on you,’ let it go.  It doesn’t matter.”

Although we should always tell the truth, lies are generally OK, she said, “if they are intended to make people feel better.”

Like some speakers use jokes to lighten the mood, Brown used magic  —  pouring water into a cup, then turning the cup (sans water) upside down; opening a notebook at the end of the talk as if to read about an infamous bicyclist,  only to have flames appear.

Find more news and video from the AHRA meeting.

Greg Freiherr is a contributing editor to Imaging Technology News. Over the past three decades, Freiherr has served as business and technology editor for publications in medical imaging, as well as consulted for vendors, professional organizations, academia, and financial institutions.

FFR-CT: Is It Radiology or Cardiology?

How Standardizing Protocols Can Save Time and Money

How To Manage Risk in the MR Suite

Growth Of ACOs And Alternative Payment Models In 2017