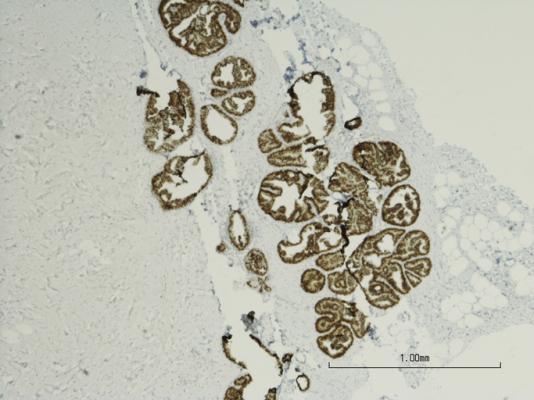 October 5, 2020 — A major study of women with ductal carcinoma in situ (DCIS) — a breast condition that can become invasive cancer — has shown that surgery to remove the tissue followed by radiotherapy offers better protection compared to surgery alone.

The study, presented at the 12th European Breast Cancer Conference, followed patients for up to 27 years. Although it shows that the benefit of radiotherapy and surgery over surgery alone persists, it also suggests that this benefit reduces over time.

Researchers say these new findings clarify the long-term risks for women with DCIS and may help women and their doctors to decide which treatment is right for them.

DCIS is a condition where cells lining the milk ducts have started to turn into cancer cells but have not spread into other parts of the breast. DCIS is often picked up by breast screening and affects tens of thousands of women in Europe each year. Only a proportion of DCIS cases will progress into invasive cancer and little is known about which cases will progress, so the treatments available to patients are very similar to treatments for invasive breast cancer.

The research was presented by Maartje van Seijen, M.D., from the Netherlands Cancer Institute (Amsterdam, The Netherlands). She said: "Most women who are diagnosed with DCIS are offered surgery to remove the abnormal breast tissue and they are often also offered radiotherapy, even though the majority would not go on to develop invasive breast cancer. We wanted to look at how this group of women get on in the long term, according to which treatment they received."

"However, there remains a chance of a new DCIS or invasive cancer developing that is not related to the initial diagnosis and we would expect this risk to be similar between the two types of treatment. In a very small number of women, radiotherapy itself might cause a new breast cancer, often many years after the radiotherapy was given."

Professor Emiel Rutgers, M.D., is President of the European Breast Cancer Council, a member of the of 12th European Breast Cancer Conference scientific committee and was not involved in the research. He said: "DCIS is a condition that affects thousands of women and a proportion of them go on to develop invasive breast cancer. Most of these women will have decades of life ahead of them so it's vital that we understand the long-term impact of the treatments we offer.

"We still need to know much more about DCIS and, in particular, which women will go on to develop invasive cancer and which will not. In the meantime, studies like this one provide patients and their doctors with more information about the benefits and costs of the different treatments available to them.

"Previous research shows that the risk of dying of cancer is only 1-2% in the 20 years following a DCIS diagnosis. So, it's important to remember that whether treated with breast conserving surgery alone or surgery with radiotherapy, the risk of dying from breast cancer in women who had DCIS remains very low."