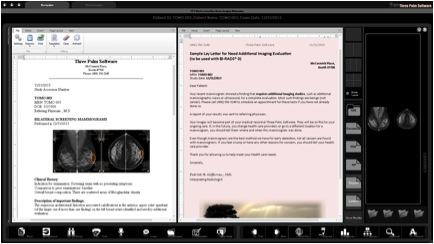 November 23, 2015 — Three Palm Software announced the release of the 1.8.0 version of its breast imaging workstation, WorkstationOne. This new release will be shown at the Radiological Society of North America (RSNA) 2015 annual meeting in the company’s booth.

For radiologists, there is a strong desire to improve efficiency while reducing costs. Particularly in smaller practices, which do not have extensive infrastructure, it is important to be able to provide a complete reading workflow without requiring additional systems.

In order to address those requirements, at RSNA Three Palm Software will showcase a total integration of imaging and informatics for breast imaging which provides native functionality to generate diagnostics reports and patient letters. This mechanism is integrated into the reading workflow, so that reporting information is captured as the case is read, and is transparently used to populate customizable templates. The reports are saved in a variety of formats, including DICOM standard mechanisms that can be archived in any picture archiving and communication system (PACS), and accompany the studies for reference in future years. DICOM formats generated include secondary capture, encapsulated PDF and structured reports.

Radiologists can even configure the system to automatically generate standard reports without any interaction. When using this native implementation, the user does not need to deal with two or three different user interface styles, and does not need two or more separate computers to achieve the task of reading and reporting a breast imaging study.

The 1.8.0 release of WorkstationOne builds on its existing comprehensive support for mammography, which includes seamless integration of tomosynthesis images from any vendor into the workflow; display of mammography computer-aided detection (CAD) reports, including 3D tomosynthesis CAD reports; and simultaneous display of related modalities and reports.

WorkstationOne will also be shown on a number of partner booths at RSNA, including PACS and full-field digital mammography (FFDM) vendors, as well as the major vendors of high-resolution mammography monitors.