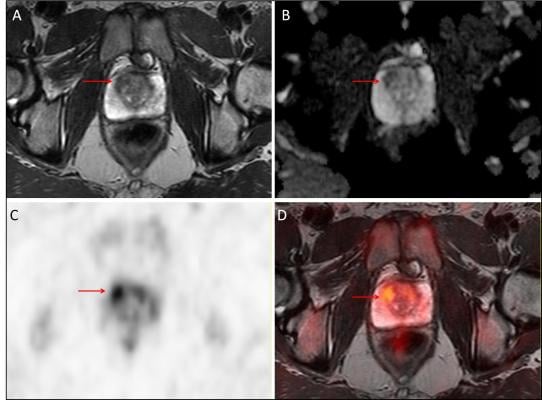 The figure shows a Gleason 3+4 prostate cancer (arrows) as identified on T2-weighted (A) and diffusion-weighted (B) MRI, F-18-choline PET (C), as well as PET/MRI (D).

The study from the University of Michigan was published in the July issue of The Journal of Nuclear Medicine.

Morand Piert, M.D., professor of radiology in the Division of Nuclear Medicine at the University of Michigan, pointed out, “Our positive results suggest that in the future, PET/MRI may become a one-stop imaging test for men with suspected but undetected prostate cancer or for patients undergoing surveillance for known low-risk prostate cancer.” He explains, “Since prostate cancer is often multi-focal and presents with multiple lesions of varying risk, it is important to identify the lesions that harbor the greatest malignant potential. Accurate identification of clinically significant cancer and avoidance of clinically insignificant cancer is the centerpiece of modern prostate cancer diagnosis.”

Fifteen subjects were ultimately identified with significant prostate cancer (Gleason ≥ 3+4), of which targeted biopsy identified 12, while standard biopsy identified only five. The figure shows a Gleason 3+4 prostate cancer (arrows) as identified on T2-weighted (A) and diffusion-weighted (B) MRI, F-18-choline PET (C), as well as PET/MRI (D). A total of 52 lesions were identified by mpMRI (19 low-, 18 intermediate- and 15 high-risk), and mpMRI-assigned risk was a strong predictor of final pathology (area under the curve (AUC) = 0.81; P < 0.001). Using the mean F-18-choline target-to-background ratio, the addition of F-18-choline to mpMRI significantly improved the prediction of Gleason ≥ 3+4 cancers over mpMRI alone (AUC = 0.92; p<0.001).

The study concluded that fusion PET/MRI-TRUS image registration for targeted prostate biopsies is clinically feasible and accurate, and the addition of F-18-choline PET to mpMRI improves identification of significant prostate cancer.

Piert noted, “The use of advanced imaging to inform placement of biopsy needles promises to greatly minimize the uncertainty associated with prostate cancer care. Imaging may one day be performed prior to biopsy and, if negative, no biopsy would be needed. To reach that future state, advanced imaging will need to have a superior negative predictive value that may not be obtainable with multi-parametric MRI alone. He added, “Although we used F-18-choline PET in this trial, it is likely that other radiotracers, which are more specific for prostate cancer — for example, those that target PSMA — may hold even greater promise.” 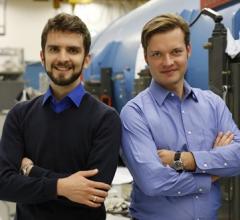