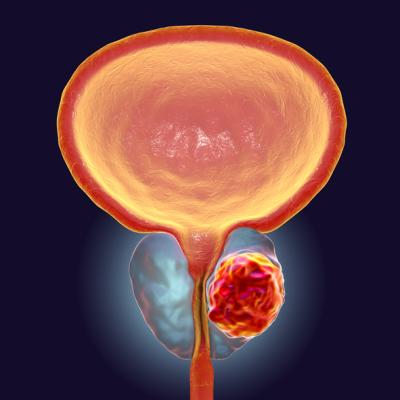 October 25, 2021 — Using fewer—but higher—doses of radiation to treat men with prostate cancer who had their prostates removed does not increase long-term side effects or lower their quality of life compared to conventional radiation treatment, a new, multi-institutional clinical trial shows. Findings from the phase III NRG Oncology GU003 trial will be presented today at the American Society for Radiation Oncology (ASTRO) Annual Meeting.

"Delivering post-prostatectomy radiation therapy with fewer treatments is a win when it comes to reducing the burden of prostate cancer on society. For patients, fewer treatments equate to a shorter time commitment that increases access to a potentially curative treatment, reduces expenses related to travel and co-pays, and involves less time away from work and other responsibilities," said lead author Mark K. Buyyounouski, M.D., a professor of radiation oncology and director of genitourinary cancers in the Department of Radiation Oncology at Stanford University’s School of Medicine in Stanford, California. "Additionally, providers can improve their facility’s productivity and increase the overall capacity for all patients. And for payors, fewer treatments mean fewer expenses.” . Prostate cancer is the second most common cancer in men. About 1 in 8 men in the U.S. will be diagnosed with the disease during their lifetime.

Prostate cancer is highly treatable; 98% of patients live 10 years or more after treatment. Given the high survival rate, quality of life and long-term side effects from treatment are important considerations. "Preserving quality of life was a major priority when testing the shorter treatment course. It is important for patients to know that accepting a more convenient treatment doesn’t mean they have to compromise on quality of life," said Buyyounouski.

The use of shorter radiation therapy courses is already a well-accepted practice standard for men who choose not to have prostatectomy surgery, based on the results of multiple randomized trials. This trial is the first to test whether an accelerated approach is also a viable option for men after undergoing prostatectomy. For men who choose to have initial surgery, radiation is indicated afterwards if rising prostate specific-antigen (PSA) levels indicate the cancer has returned.

Buyyounouski and his team compared patient-reported genitourinary (GU) and gastrointestinal (GI) side effects following hypofractionated, post-operative radiation therapy delivered over five weeks to those experienced by men treated with conventionally fractionated radiation delivered over seven weeks. Side effects were measured using the Expanded Prostate Cancer Index Composite (EPIC); patients reported how GU and GI symptoms affected their quality of life immediately after completing radiation therapy and again at six, 12 and 24 months after treatment. Researchers then compared changes in patients' EPIC scores over the study period. 2/4 Immediately after treatment, the average change to patients' GU scores did not differ between treatment groups, but patients treated with shortened radiation initially reported worse GI symptoms. By six months, however, there were no differences in GU or GI impacts reported by the two groups. Patients' quality of life as indicated by changes in GU or GI scores remained comparable until the end of the two-year follow-up period.

The trial was unique in its use of patient-reported outcomes as the primary endpoint. As Buyyounouski explained, "the ideal way of measuring quality of life is by asking the patient themselves."

Buyyounouski said the research team was not surprised that participants reported some discomfort initially following treatment. He said, “Short-term side effects of radiation therapy are well-established, and patients understand that. What patients ultimately want to know is whether the side effects will go away, and that's what we saw in our study. There was some increase in bowel side effects, more so with the shorter treatment, but, after six months, these side effects resolved—and patients didn’t report any further or additional bowel or bladder side effects one and two years later."

Buyyounouski said he believes side effects were minimal because of the way the study was designed and the high skill level of the radiation oncologists involved in the study. "Like many of the studies before ours, we designed this study to be scalable and deliverable by radiation oncologists everywhere.” The study was conducted at more than 90 centers in North America. “Knowing the results of the study, it may also be possible to make an adjustment to the treatment technique that lessens the bowel symptoms reported by patients at the end of treatment. Radiation oncology is process-oriented, and, consequently, feedback is commonly used to refine and improve our treatments,” said Buyyounouski.

Senior author Howard M. Sandler, M.D., FASTRO, said the findings can inform discussions between patients and their providers on the best course of treatment. "I think this is another option for radiation oncologists to be able to provide an effective treatment to patients who might otherwise not have access to treatment, due to restraints around needing seven weeks to complete their therapy," said Sandler, chair and professor of radiation oncology at Cedars-Sinai Medical Center in Los Angeles.

"The hypofractionated approach lowers the bar for getting someone a treatment they can benefit from following prostatectomy," he said. "It is yet another option for patients."