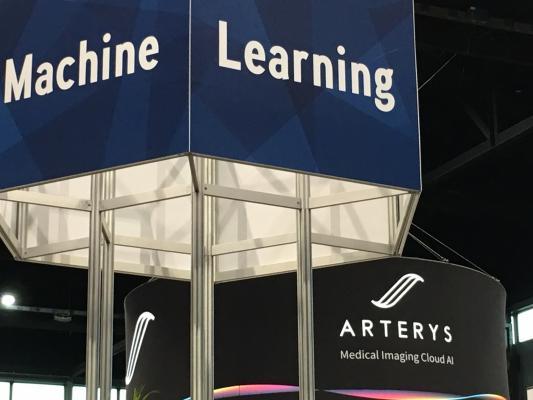 “The 2017 theme was ‘Explore. Invent. Transform,’” said RSNA Executive Director Mark G. Watson. “The meeting offered attendees a vast array of opportunities to explore the research and interact with the technologies that are transforming the practice of radiology.”

RSNA 2017 featured a number of hot topics in radiology, such as artificial intelligence/machine learning, virtual reality and 3-D printing for medical applications.

Advances in machine learning and artificial intelligence offer a variety of applications that are now being employed in medical imaging with compelling results. RSNA 2017 provided numerous events related to machine learning, including scientific sessions, a dedicated education area and the Machine Learning Showcase, sponsored by Carestream Health, Google Cloud and Zebra Medical Vision, which allowed attendees to connect with companies and see the latest in machine learning and artificial intelligence software and products.

The Machine Learning Showcase also hosted a recognition session for the awardees of the RSNA Pediatric Bone Age Challenge, a machine learning competition designed to showcase methods for creating algorithms that improve the assessment of pediatric bone age based on hand radiographs.

The Learning Center included presentations on 3-D printing and virtual reality along with demonstrations throughout the week.

Among the more popular new features of the meeting was the Fast 5 Session.

“During the session, five speakers each gave a five-minute presentation on the Arie Crown stage, sharing their unique ideas about topics which inspire them to explore, invent and transform medical imaging,” Watson said. “The presenters were excellent, and the session was very well received by the audience.”

Throughout the week at McCormick Place, professional attendees could choose from an abundance of scientific presentations and posters, education courses and exhibits, and plenary sessions. The Discovery Theater, part of the RSNA Connections Center introduced in 2016, hosted a wide range of new programming, including educational presentations, career advice, tutorials on navigating Chicago, performances by local musicians, and an RSNA Diagnosis Live competition among four residency programs, with the University of Cincinnati taking the trophy.

The technical exhibition was 422,175 square feet and consisted of 692 exhibitors, including 141 first-time exhibitors. The First-Time Exhibitor Pavilion featured exhibitors new to the RSNA annual meeting in a centralized location.

Innovations in medical imaging are introduced on an increasingly accelerated basis. New to the exhibit floor in 2017, the Start-up Showcase allowed attendees to discover new developments and connect with emerging companies positioned to bring new products and services to market.

The RSNA 2017 Virtual Meeting offered access to 134 live-streamed and on-demand courses from RSNA 2017, as well as plenary sessions and other meeting content. The virtual meeting attracted 6,025 registrants, including 5,733 professional registrants. On-demand access to the Virtual Meeting is available through Feb. 28, 2018.

Official registration for RSNA 2017 totaled 52,657 registrants, including 26,966 professional registrants of which 2,013 were virtual-meeting only.