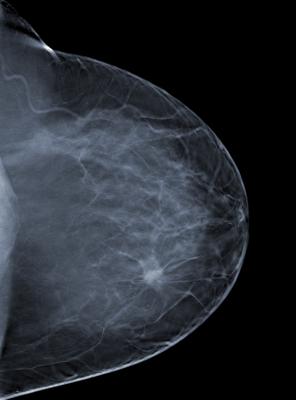 A subset of patients with low-risk breast cancer is highly unlikely to see cancer return following breast conservation surgery but can lower that risk even further with radiation therapy, finds a new long-term clinical trial report. These 12-year follow-up data from the only prospective, randomized trial to compare recurrence outcomes after treatment for low-risk ductal carcinoma in situ (DCIS) was presented on Oct. 21 at the 60th Annual Meeting of the American Society for Radiation Oncology (ASTRO).

In this long-term update, patients with “good risk” DCIS — defined by the research team as cancer found only on mammogram or incidentally during a breast biopsy for another reason — continued to experience extremely low recurrence 12 years after breast conservation surgery. Those who underwent whole breast radiation therapy (WBRT) and those who also opted to take tamoxifen experienced the lowest recurrence rates, but even those who received no further treatment following surgery did not experience any life-threatening consequences.

“I think the most surprising thing was that the recurrence rate in patients randomized to receive radiation therapy was so low. Radiation reduced recurrence by half, and this was a much more profound impact than we expected,” said Beryl McCormick, M.D., FASTRO, lead investigator of the NRG Oncology/RTOG multi-center trial, Chief of the External Beam Radiotherapy Service at Memorial Sloan Kettering Cancer Center and a professor of radiation oncology at Cornell University in New York.

Since none of the tumors that recurred in either group appeared to pose a life-threatening risk, however, McCormick said it was reasonable for patients to determine, in consultation with their physician, whether continued treatment following surgery was something they wanted to do.

“Not all DCIS is the same,” said McCormick. “This type of cancer will not impact life expectancy. We found that radiation does significantly reduce the risk for recurrence, but you are starting with an extremely low recurrence rate even without radiation. Therefore, there should be a meaningful discussion between patient and doctor about whether additional treatment is something the patient wishes to pursue.”

DCIS is a cancer of the cells that line the milk ducts of the breast. It accounts for roughly one-fourth of all new breast cancers for an estimated 60,000 cases diagnosed in the United States each year. The current standard of care for DCIS includes lumpectomy to remove the tumor in combination with radiation therapy to reduce the likelihood that the cancer will return.

Eligible tumors were 2.5 centimeters (cm) or smaller, with margins of three millimeters or less, and of low or intermediate nuclear grade. From 1999 to 2006, 636 patients were randomly assigned to receive WBRT with standard doses or to an observation arm. The use of tamoxifen for five years was optional. Initial results, including seven years of follow-up, were reported in 2013 and published in the Journal of Clinical Oncology in 2015.

The new analyses include long-term follow-up data for 629 patients whose median age was 58 years, including 76 percent post-menopausal women. Mean pathological tumor size was 0.60 centimeters (61 percent 0.5 cm or smaller, 65 percent with a margin width of 1.0 cm or larger or a completely negative re-excision specimen). The highest nuclear tumor grade was 1, found in 44 percent of patients; grade-2 tumors were diagnosed in the remaining 56 percent. Tamoxifen was used by 58 percent of patients on the WBRT arm and 65 percent of those on the observation arm (p=0.05).

In multivariate analysis, only those who received both WBRT (HR 0.25, 95% CI 0.12, 0.53; p=0.0003) and tamoxifen (HR 0.50, 95% CI 0.27, 0.91; p=0.024) experienced reduced local recurrence. Neither age nor pathological tumor size were significant for predicting local recurrence or invasive local recurrence. There were no significant differences between treatment arms for overall survival, disease-free survival or mastectomy use.

During the additional five years following surgery, noted McCormick, “there was a slight creeping up of local recurrence rate.” For those who received WBRT, the rate increased by just under 1 percent, bringing it to nearly 3 percent post-surgery. For those who did not receive radiation, the recurrence rate increased by one percentage point each additional year of follow-up, climbing from just under 7 percent to just under 12 percent after 12 years.

These results “should inform a meaningful patient-physician discussion that includes risks, benefits and the patient’s own degree of comfort,” McCormick concluded.

“All of us have a different definition of what is an acceptable risk,” she said. “Some patients with DCIS will still want radiation therapy. But for others, the risk is so low they may opt not to treat, and that should be considered a viable option.”

The abstract, “Randomized trial evaluating radiation following surgical excision for “good risk” DCIS: 12-Year report from NRG/RTOG 9804,” will be presented in detail during a news briefing and the clinical trials session at ASTRO’s 60th Annual Meeting in San Antonio.