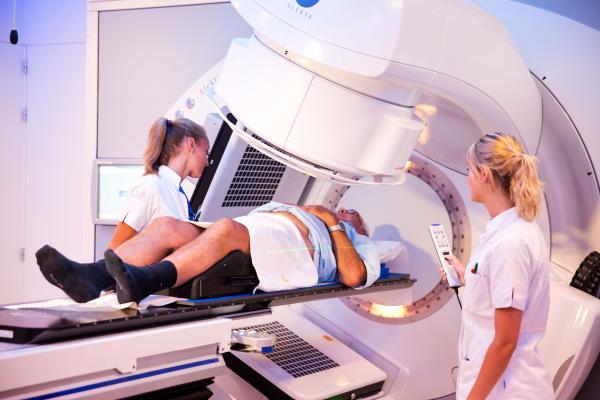 January 25, 2021 — An additional external-beam radiation dose delivered directly to the tumor can benefit the prospects of men with non-metastatic prostate cancer, without causing additional side effects. The risk of relapse within five years for these men is smaller than for men who did not receive this boost, as shown by a large-scale study initiated by UMC Utrecht in collaboration with the Netherlands Cancer Institute, UZ Leuven and Radboudumc.

Radiation therapy is one of the treatment options for men with non-metastatic prostate cancer. Physicians deliver the external beam radiation to the entire prostate, as cancer cells often occur in several areas throughout the prostate. Only the main tumor is visible on a scan. If the cancer returns, it often recurs right where that visible tumor was located. Delivering an additional dose to this area appears very effective, as shown by the FLAME trial: a large-scale study involving 571 patients at UMC Utrecht, Netherlands Cancer Institute, UZ Leuven, and Radboudumc. Results will be published on the 20th of January in the Journal of Clinical Oncology.

As part of the study, patients received 35 radiotherapy sessions with or without additional radiation boost delivered to the visible tumor. The men who had received the additional boost showed less recurrence over the first five years after treatment than the others. 92% of men who received the boost had low levels of PSA – an important indicator of prostate cancer – compared to 85% of men who had not. All participants were men diagnosed with intermediate- or high-risk tumors.

No Additional Side Effects

“The radiation boost halved the percentage of men presenting with raised PSA levels over the first 5 years after treatment: from 15 to 8 percent,” radiation oncologist and research leader Linda Kerkmeijer of UMC Utrecht and Radboudumc clarified. “The radiation boost did not lead to additional side effects, which is an important outcome.” The treatment is currently available at UMC Utrecht, the Netherlands Cancer Institute, UZ Leuven and Radboudumc.

“Our results can benefit a substantial number of men,” radiation oncologist Floris Pos of the Netherlands Cancer Institute explained. “Every year in the Netherlands, we give radiation therapy to hundreds of men who may qualify for this treatment. This could prevent a lot of trouble: for our patients, cancer recurrence often means uncertainty, diagnostic examinations, and intense treatments like surgery or hormone therapy.”

5 Radiation Sessions
At the start of the FLAME trial, standard treatment for these patients was 35 radiation sessions. Over the past years, this number has been scaled down to 20, and 5 for men with less aggressive tumor types. “Meanwhile, we have started a follow-up study that combines these new radiation boosts with 5 radiation sessions” (see information below), says radiation oncologist Karin Hausterman of UZ Leuven. “It appears that 5 radiation sessions may become the new standard for this group of patients as well.”