High-dose Radiation Effective for Men Whose Prostate Cancer Has Spread 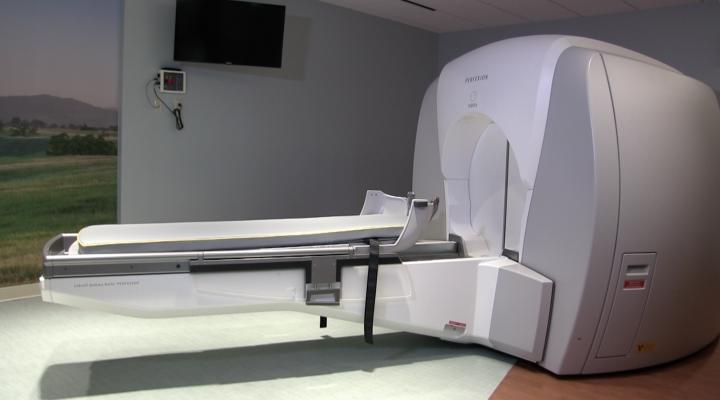 September 23, 2019 — A randomized clinical trial of targeted, high-dose radiation for men with oligometastatic prostate cancer has shown the treatment to be an effective and safe option for patients who wish to delay hormone-suppression therapy. The phase II trial found that radiation therapy can generate an immune system response not previously believed possible in this type of cancer. Findings were presented at the 61st Annual Meeting of the American Society for Radiation Oncology (ASTRO), Sept. 15-18, 2019, in Chicago.

Previous research has shown high-dose radiation to be safe and effective for men with localized or non-metastatic prostate cancer, but patients with oligometastatic disease – whose cancer has been treated but then returned to a limited number of other parts of the body – generally have been considered incurable. "Single-institution studies and limited prospective data have recently suggested that high-dose, targeted radiation may be effective for men whose prostate cancer had spread, and now these ORIOLE randomized data confirm those observations," explained Ryan Phillips, M.D., Ph.D., chief resident in radiation oncology at the Johns Hopkins School of Medicine in Baltimore, and lead author on the study.

The study, also known as the ORIOLE trial, randomized 54 patients whose cancer had spread to a limited number of sites outside the prostate after treatment with surgery or radiation. The patients were placed in one of two arms: those who were observed but received no further treatment for six months, and those who were treated with stereotactic ablative radiotherapy (SABR), also known as stereotactic body radiation therapy (SBRT), to the metastatic sites outside of the prostate. SABR/SBRT is a form of high-precision cancer therapy that delivers substantially higher doses of radiation to the tumor site in just one or a few treatment sessions.

Men treated with SABR were significantly less likely to experience increases in their PSA levels and lived significantly longer without any detectable disease progression than patients who received no additional treatment. Six months later, just 19 percent of patients treated with SABR saw their disease progress, compared to 61 percent of those in the observation arm (p=0.005). The median progression-free survival (PFS) time for those in the observation arm was 5.8 months (HR 0.30, p=0.002), whereas more than half of the patients in the SABR-treated arm were still progression-free more than a year after treatment.

“ORIOLE provides additional randomized trial data to support what previous studies have been suggesting,” said Phillips. “Compared to retrospective reports, our study provides a higher level of evidence that SABR benefits these patients (as compared to observation for six months) because we can see how the patients who didn’t get SABR did in comparison.”

The ORIOLE trial, only the second randomized clinical trial to report findings on SABR for oligometastatic prostate cancer, has also shed light on what happens to the immune system when the disease is treated with high-dose radiation therapy.

The research team looked at blood cells sampled before radiation therapy and 90 days after treatment; they found “significant, measurable changes” in the T cells of patients on the SABR arm, but no change in the T cells of those in the observation arm. “The magnitude of change in the immune system response was similar to what you see after a vaccination” said Phillips, suggesting that radiation may spark the immune system to more aggressively fight the cancer.

“This is the first bit of evidence that I’m aware of showing that SABR can induce a systemic immune response in patients with prostate cancer,” said Phuoc Tran, M.D., Ph.D., principal investigator of the trial and an associate professor of radiation oncology and molecular radiation sciences at the Johns Hopkins Kimmel Cancer Center. “Other studies have made similar observations, but these are probably the most robust, sensitive and controlled observations that SABR can excite a systemic immune response.”

“Cancer of the prostate is a tumor that does not typically incite a response from the immune system, so seeing this response is exciting,” he added. “There is still much work to be done to understand how radiation and the immune system interact.”

Using a sophisticated type of imaging largely accessible only to research institutions, the study also shed light on how high-dose radiation therapy may alter the course of prostate cancer spread or metastasis.

Typically, metastatic prostate cancer lesions are detected using conventional imaging technologies such as bone scans, magnetic resonance imaging (MRI) and/or computed tomography (CT) scans. The ORIOLE trial used these conventional imaging techniques to identify patients eligible for their study (eligibility was based upon the detection of one to three metastatic lesions), but also made use of a more sensitive, advanced imaging technology known as a prostate-specific membrane antigen (PSMA) positron emission tomography (PET) scan. This scan detects proteins that are overexpressed in prostate cancer and can reveal the presence of otherwise undetectable tumor growth.

Patients randomized to the SABR arm (n=36) received radiation to all lesions detected by conventional imaging. However, they also underwent PSMA PET scans prior to and 180 days after treatment. The results of those scans were not made available to the physicians developing their treatment plans; they were used only for further analysis and comparison of cancer growth.

What this suggests, said Tran, is that the high-dose radiation treatments are not just destroying the tumors targeted by SABR, but they are changing the course of metastatic disease.

Currently, PSMA PET scans are not widely available for physicians to use in treatment planning, said Phillips, but this study should add to the growing body of evidence of their usefulness. “That extra imaging information gave us extra power to prevent disease progression and new metastases,” he said. “In our experience, these scans add to our ability to control the disease.”