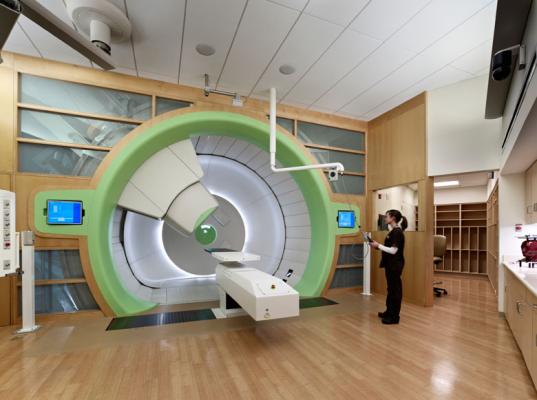 November 1, 2017 — Pediatric patients with head and neck cancer can be treated with proton beam therapy (PBT) instead of traditional photon radiation, and it will result in similar outcomes with less impact on quality of life. Researchers from the Perelman School of Medicine at the University of Pennsylvania as well as Children’s Hospital of Philadelphia analyzed cases of pediatric head and neck cancer treated with PBT between 2010 and 2016 and found similar rates of tumor control and lower rates of toxicity than what is historically expected from photon radiation. They published their findings in the journal Pediatric Blood and Cancer.

Cancers of the head and neck account for about 12 percent of all pediatric cancers, and they are generally different tumor types than those that affect adults. For solid tumors like neuroblastoma, thyroid cancer and soft tissue sarcomas, treatment usually involves a combination of therapies including chemotherapy, radiation therapy and surgery. Post-operative radiation can be critical, since surgeons may not be able to completely remove all cancer given the complexity of the head and neck region.

The area’s sensitivity also means the effects of treatment can lower patient quality of life due to symptoms including loss of appetite, difficulty swallowing, or mucositis, in which ulcers form in the digestive tract, usually in reaction to chemotherapy or radiation.

“These concerns are especially important to address in pediatric patients, since they’re still developing and may need to deal with any adverse effects for the rest of their lives. This study shows that protons may be an important tool in improving quality of life both during treatment and for years after for these young patients,” said the study’s senior author Christine Hill-Kayser, M.D., chief of the Pediatric Radiation Oncology Service at Penn and an attending physician at CHOP. CHOP cancer patients who need radiation therapy are treated at Penn, including proton therapy through the Roberts Proton Therapy Center.

Jennifer Vogel, M.D., a resident in radiation oncology at Penn, is the clinical study’s lead author.

Researchers looked at 69 pediatric head and neck cancer patients treated with PBT at Penn and CHOP between 2010 and 2016. Thirty-five (50 percent) of those patients had rhabdomyosarcoma, a cancer of the cells that make up skeletal muscles. Ten (7 percent) were treated for Ewing sarcoma, a cancer most commonly found in the bone or soft tissue. The other 24 were treated for a variety of other cancers affecting the head and neck regions.

One year after treatment, 93 percent of patients were still alive, and 92 percent did not experience recurrence at their primary disease site.

Toxicities, or side effects, are measured on a scale from 1 to 5 with 5 being the most severe. In this study, no patients were above grade 3, and the most severe toxicities at that level were mucositis (4 percent), loss of appetite (22 percent) and difficulty swallowing (7 percent).

Those numbers are still well below what is typically associated with photon radiation. In rhabdomyosarcoma, for example, 46 percent of patients historically report grade 3 or 4 mucositis.

“These data show proton therapy is not only effective, it is also more tolerable for patients,” Hill-Kayser said. “This study shows this treatment is safe and offers practice guidelines for delivering head and neck proton therapy in the pediatric population.”

Researchers say they plan to follow up with these patients to evaluate long-term disease control and late-developing toxicity.