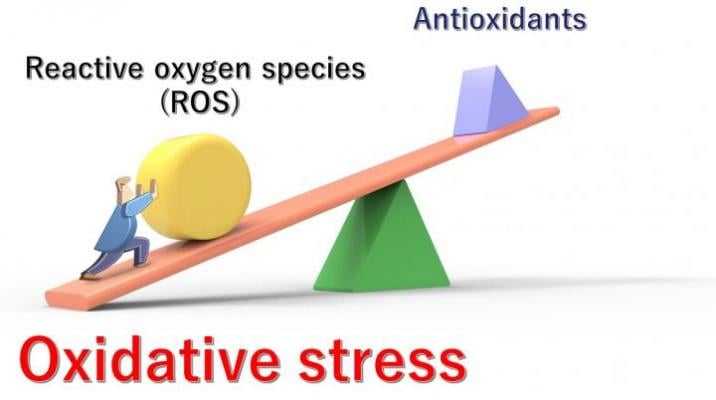 February 10, 2021 — Oxygen is essential for human life, but within the body, certain biological environmental conditions can transform oxygen into aggressively reactive molecules called reactive oxygen species (ROS), which can damage DNA, RNA, and proteins. Normally, the body relies on molecules called antioxidants to convert ROS into less dangerous chemical species through a process called reduction. But unhealthy lifestyles, various diseases, stress, and aging can all contribute to an imbalance between the production of ROS and the body's ability to reduce and eliminate them. The resulting excessive levels of ROS cause "oxidative stress," which can disrupt normal cellular functions and increase the risk of diseases like cancer, neurodegeneration, kidney dysfunction and others, which are all accompanied by severe inflammation.

Since oxidative stress is associated with various serious diseases, its detection within living organs offers a route to early diagnosis and preventive treatment, and is, thus, a matter of considerable interest to scientists working in the field of biomedicine. Recent international collaboration between the Japanese National Institutes for Quantum and Radiological Science and Technology (QST), Bulgarian Academy of Sciences and Sofia University St. Kliment Ohridski in Bulgaria led to a promising technology for this purpose: a novel quantum sensor. Their work is published in the scientific journal Analytical Chemistry, 2021.

According to lead scientist Rumiana Bakalova, M.D., and her colleague Ichio Aoki, M.D., of QST, "the new sensor is appropriate for the early diagnosis of pathologies accompanied by inflammation, such as infectious diseases, cancer, neurodegeneration, atherosclerosis, diabetes, and kidney dysfunction."

The sensor comprises a quantum dot--semiconductor--core coated with a ring-shaped sugar-like compound called α-cyclodextrin, which in turn is bonded to six redox-sensitive chemical groups called nitroxide derivatives. These components have the advantage of favorable safety profiles, with cyclodextrins being approved for use in food and nitroxide derivatives being considered generally harmless for living beings due to their antioxidant properties.

The nitroxide derivatives cause the sensor to give ON fluorescence signals when in a reduced state and give ON magnetic signals when in an oxidized state. This allows for the detection of oxidative stress, or a reduced cell/tissue capacity, using methods such as magnetic resonance imaging (MRI) and electron paramagnetic imaging (EPR), which can detect magnetic signals. The chemical sensor is also bonded to a compound called triphenylphosphonium, which helps the sensor enter living cells and proceed to the mitochondria, which are the cellular components most often responsible for generating ROS, particularly under pathologic conditions.

To test their novel chemical sensor, the scientists first performed experiments with cultures of normal (healthy) and cancerous colon cells in the lab. For this they used their sensor in the oxidized form. In healthy cells, EPR signals were quenched; but in cancer cells, they stayed strong. This indicates that the sensors were reduced in healthy cells by antioxidants but remained in their oxidized state in the cancer cells, which in turn suggests that the cancerous cells had a higher oxidative capacity.

To further test the sensor, the researchers conducted experiments with both healthy mice and those that had been raised on a high-cholesterol diet for 2 months, which caused them to develop early-stage kidney dysfunction due to persistent inflammation. Compared with the healthy mice, the mice with kidney dysfunction exhibited stronger MRI signals in their kidneys, suggesting that their kidneys were under greater oxidative stress.

This work is in its initial stages and much research is required before these sensors can be ready for medical use. But these findings reveal the potential of such technology. Bakalova noted: "Our sensor is suitable for analyzing even small redox imbalances associated with the overproduction of ROS, via MRI. And while MRI and CT by themselves have been able to diagnose advanced stage kidney damage, they have not yet been able to visualize early stages of dysfunction. The use of our probe could help clinicians identify patients in the early stage of renal damage before they need hemodialysis or kidney transplantation. With further research, our sensor could be the next generation of redox-sensitive contrast probes for early diagnosis of kidney dysfunction, and perhaps, a number of other diseases that are accompanied by inflammation."