MinXray Sets Up Base Camp at Mount Everest 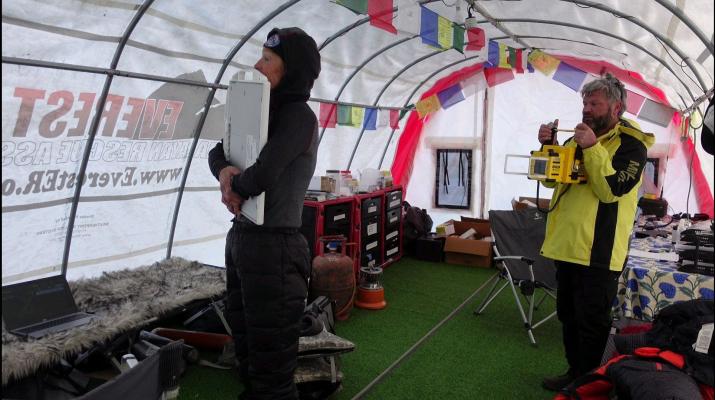 July 15, 2022 — Mike Cairnie, MinXray’s Director of Global Sales, and a group of three medical professionals from Qure.ai brought portable digital radiography to one of the most out-of-the-way regions on the earth, Mount Everest’s southeast base camp in Nepal.

The team arrived in Kathmandu, Nepal on April 12 and traveled by foot to the airport in Lukla on April 14. They then flew to the Everest View Hotel, situated within Nepal’s Sagarmatha (Everest) National Park. A UNESCO World Heritage Site, the Everest View Hotel is the highest built hotel in the world at 13,000 feet. The team spent three days at the hotel for altitude acclimatization and made their final leg of the journey on April 17 to Everest’s southeast base camp, which rests at an elevation of 17,598 feet.

“Until now, radiographic imaging was not possible in this remote location,” said Cairnie. “If a medical emergency occurs at the base camp or during a climb, this system now make it possible to immediately radiograph the affected party.” Cairnie added, with the addition of the qXR module, both systems can be used as a chest X-ray screening tool to detect signs of abnormalities.

The MinXray and Qure.ai teams took several sets of radiographs while image testing the Impact system at the Nepali base camp. As this is likely the highest altitude at which a digital X-ray has ever been taken, the team submitted this achievement to the Guinness Book of World Records.