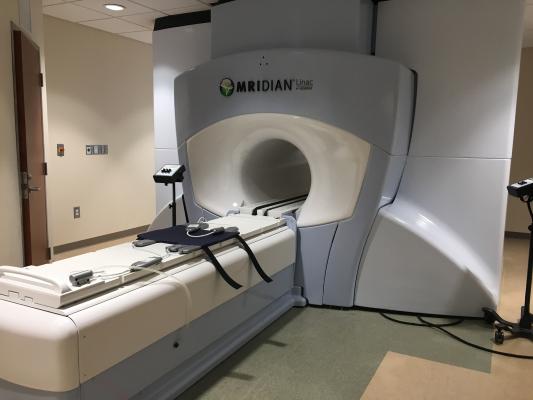 The use of MRI instead of CT for daily image guidance offers several important advantages in the delivery of SABR including superior visualization of the internal anatomy prior to and uniquely continuously during treatment delivery.

SABR is an advanced and technically complex procedure in which very high radiation dose is delivered using steep dose gradients with millimeter precision and accuracy. The most common delivery schedule is daily treatment for five total days to each targeted tumor. While completing treatment in only one day may be possible, it is not commonly done using CT-guided radiation delivery machines because of safety concerns due to limitations in visual confirmation of tumor and nearby critical organ position throughout treatment.

MRIdian's design allows clinicians the ability to safely deliver an ablative dose and expand single-fraction SABR to tumors that would not have been previously considered. The design includes diagnostic-quality anatomic imaging prior to treatment delivery, the ability to perform on-table adaptive planning and continuous intrafraction visualization, soft tissue tracking and automatic beam gating. These features facilitate tighter planning target volume margins to spare healthy tissue, especially in immediate proximity to the target, which allow for reduction or elimination of higher-grade toxicities often associated with SABR dose delivery.

"With MRIdian, we're giving clinicians the clinical confidence to safely deliver ablative radiation doses while also reducing the number of treatments," said Martin Fuss, M.D., chief medical officer at ViewRay. "MRI-guidance and on-table adaptive delivery ensure that these powerful radiation doses are reaching the target but avoid highly sensitive surrounding critical structures. We believe this treatment concept has the potential to alleviate toxicity risks associated with SABR while improving outcomes for cancer patients around the world."

A growing body of clinical literature has led to the initiation of the SMART ONE trial design. This evidence describes favorable outcomes of imageguided SABR for various cancers, including tumors in the pancreas, liver, lung, breast, adrenal gland, kidney, lymph nodes, and prostate; however, the peer-reviewed, published body of data has nearly exclusively been based on multi-fraction SABR.

"Published experience suggests that delivery of single-fraction SABR using MRIdian should be at least isotoxic and isoeffective as compared to multifraction SABR, as supported by its on-table adaptive planning capabilities and continuous soft-tissue tracking with automatic beam gating," said Chuong. "We believe the study will demonstrate the feasibility to safely and effectively deliver SABR in only one fraction across these indications that will not only shorten overall treatment time, but also reduce cost and improve increase patient convenience."

The MRIdian system provides oncologists outstanding anatomical visualization through diagnostic-quality MR images and the ability to adapt a radiation therapy plan to the targeted cancer with the patient on the table. This combination allows physicians to define tight treatment margins to avoid unnecessary radiation exposure of vulnerable nearby organs-at-risk and allows the delivery of ablative radiation doses in five or fewer treatment sessions, without relying on implanted markers. By providing real-time continuous tracking of the target and surrounding healthy tissues, MRIdian enables automatic gating of the radiation beam if the target moves outside the user-defined margins. This allows for delivery of the prescribed dose to the target, while sparing surrounding healthy tissue and critical structures, which results in minimizing toxicities typically associated with conventional radiation therapy.