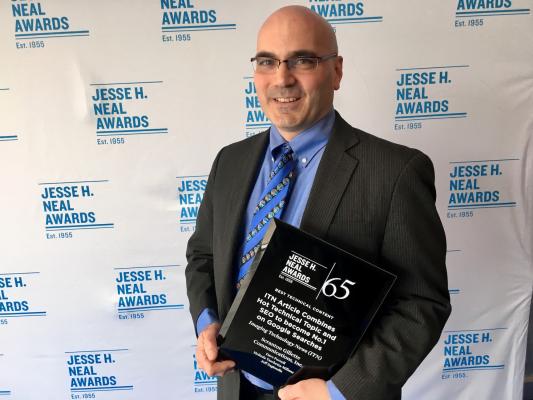 April 24, 2019 — Imaging Technology News (ITN) was recently named the 2019 Jesse H. Neal Award winner in the Best Technical Content category for its team coverage of the topic of gadolinium.

The Jesse H. Neal Awards, sponsored and hosted by Connectiv, a division of the Software & Information Industry Association, are recognized as the “Pulitzer Prize of the business press.” The winners are selected for exhibiting journalistic enterprise, service to the industry and editorial craftsmanship. 2019 marked the first Neal Awards win in ITN’s history.

ITN editors joined several gadolinium patient groups on Facebook and read through hundreds of posts to gather the patient perspective. These groups were asked what questions they wanted posed to key MRI thought leaders, resulting in hundreds of comments. The responses formed the basis for interviews at the 2017 Radiological Society of North America (RSNA) meeting. ITN also shot video interviews with thought leaders and attended several sessions on this topic. The article was published online in February 2018. While written for radiologists, it was also geared it to be a resource for patients. It outlines the chemistry of gadolinium agents, symptoms patients report and regulatory actions taken. Extra search engine optimization (SEO) helped it on Google to appear on Page 1 of all searches for the topic. The result was was the best performing article ever on ITN, with more than 93,000 pageviewsin 2018. This one article now outperforms ITN's homepage traffic.